Benovia Winery: The legacy of Family

The landscape of Napa and Sonoma is littered with wineries that were once family-owned operations, independent and fiercely focused on quality. Over the past decade, many of those wineries were absorbed by the Jacksons and Foleys of this world. In most cases the scenario was the same: after decades of conscientious effort, the owners had achieved a measure of critical and financial success, only to come to a point where they had no children interested in carrying on their legacy. Do those properties still make good wine under their new ownership? The answer is generally yes, but they have lost the passion and spark that made them unique.

Against that background, it’s reassuring to stumble on an estate such as Benovia, a Russian River winery owned by the husband and wife team of Joe Anderson and Mary Dewane. Their saga began in 2003 when the couple purchased the Cohn Vineyard west of Healdsburg. Two years later, they bought a winery facility and were joined by Mike Sullivan, former winemaker at Hartford Court. In the early years they relied heavily on purchased grapes, but their sources were impeccable (particularly Martinelli, a fourth-generation Sonoma grower). Today Anderson and Dewane also own the Martaella Vineyard adjacent to their winery, as well as the high-altitude Tilton Vineyard in the Sonoma Coast.

The importance of family is reflected in the naming of Benovia, which honors the couple’s fathers (Ben Dewane and Novian Anderson), who instilled in their children the importance of hard work and dedication to quality. Similarly, the Martaella Vineyard is named for their mothers, Martha and Eleanor.

Those estate vineyards today supply most of the fruit for their tiny 4,000-case annual production, which is sold to consumers via a mailing list and also distributed to restaurants. Vineyard manager Chris Kangas practices sustainable farming, and the Cohn Vineyard grapes are grown organically without the use of pesticides or herbicides. Under Sullivan’s direction, the winemaking is both precise and respectful of the sites where the fruit comes from. Perhaps most importantly, the use of new oak is measured and careful---Benovia is making wine, not oak juice.

The end result is a product that is distinctive and compelling, even if Benovia remains a work in progress. It may be difficult to quantify exactly what makes it different from mass-produced, commercial quaff, but even the casual drinker will be able to perceive that difference. Even more refreshing than the wine itself is the concept that life is about leaving a legacy, rather than building an empire.

Let’s keep our fingers crossed and hope they have children. 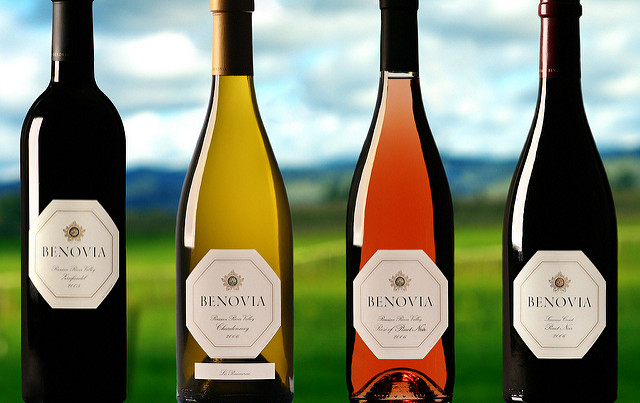 The 2014 Russian River Chardonnay ($38) is primarily sourced from Benovia’s Martaella estate vineyard. The clean, fresh nose is perfumed with aromas of citrus, stone fruits and minerals. On entry, the wine is just as crisp and direct in the mouth as it seems on the nose: flavors of lemon, lime and green apple come to the forefront on a wave of vibrant acidity, enhanced by restrained use of oak. The wine becomes more complex in the mid palate, with a strong mineral backbone supporting notes of creamy vanilla. The finish is mouthwatering and persistent. Due to the generosity of texture, this would make a good match for veal, pork and poultry as well as seafood.

Jammy black fruits and toasty oak rise from a glass of the 2014 Russian River Pinot Noir ($38), with undertones of fresh herbs and whiffs of anise. The wine is rich and full-bodied in the mouth, with syrupy flavors of black raspberry, Damson plum and black cherry that cling to the palate. Good acidity tempers the intensity of the fruit and the viscous texture, and the finish is long and satisfying. Forget about sipping it casually at a cocktail party: this is a Pinot Noir best suited to red meats, game dishes and cold-weather stews.

Located several miles from the Pacific Ocean, the Tilton Vineyard---planted in 2009--- is cooled by marine breezes that encapsulate the acids and flavors of Pinot Noir. Benovia's 2014 Tilton Hill bottling ($60) exudes aromas of fresh red raspberry and wild strawberry on the nose. The wine is bright and vivid on the palate, with mouthwatering acidity highlighting flavors of red cherries, currants and mocha---the opposite of the Russian River Pinot Noir, in a number of ways. Hints of white pepper emerge in the mid palate and continue on the long finish. As the vines mature, this will be a wine to watch.