The Napa Valley now has two restaurants that have received three Michelin stars (The French Laundry and The Restaurant at Meadowood), which means you have the opportunity to drop $1000 or more for two on dinner, just as you might in New York or San Francisco. The real dining discoveries, though, are at the more casual and lower-priced end of the scale, and these are the places that mesh better with the lifestyle of California wine country. Over the past five years a collection of chef-driven restaurants has opened with relaxed décor and delicious, market-driven menus. While most require a bit of advance planning, they don’t present the daunting reservation gauntlet of the Michelin-starred establishments. Check out these destinations for either a romantic dinner or an evening of communal fun: 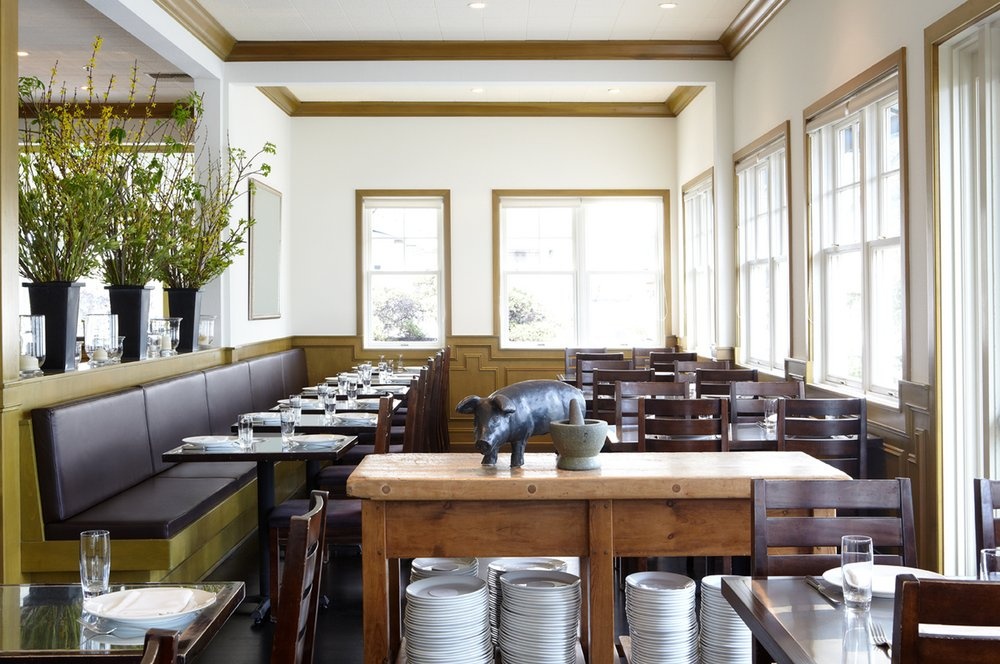 Both places are located in Yountville and owned by celebrated Chef Thomas Keller, but that’s where the comparison to The French Laundry ends. Bouchon, which has branches in Las Vegas and Beverly Hills, is a rustic French bistro featuring classic fare such as shellfish platters, charcuterie and steak frites. The wine list centers on selections from France and California, and offers carafes of “honest, truly local” wines. Ah Hoc serves a four-course family style menu five days each week; diners check the website in the morning and decide if that evening’s fare suits them. In addition, you may order a box lunch Thurdays through Saturday’s from Addendum, Ad Hoc’s takeout branch. Predictably, the wine list is an impressive compilation of small-production gems from Napa and Sonoma (Bouchon Bistro, 6534 Washington St., Yountville, (707) 944-8037; Ad Hoc & Addendum, 6476 Washington St., Yountville, (707) 944-2487; thomaskeller.com).

Cindy Pawlcyn, chef-owner of Napa’s Mustards and Go Fish, two of the most popular restaurants in California wine country, has created this “hip, casual and not fussy” eatery in a restored 19th century building. She describes the overall effect as combining “the sophistication of a supper club with the flair of a speakeasy.” The inventive menu offers specialties such as Backstreet Fry, Rabbit Tostada, Chinatown Duck Burger and “Adult Grilled Cheese.” The wine list offers exotic, small-batch Napa wineries with an emphasis on good value (1327 Railroad Avenue, St. Helena, (707) 963-1200; cindysbackstreetkitchen.com).

Located on Main Street in St. Helena, this narrow and frequently crowded restaurant features an open kitchen and an Italian-inspired menu that changes daily, designed by chef/owner Jude Wilmoth. Dishes tend toward the rustic end of the scale; fixtures include homemade mozzarella, a risotto of the day, housemade pastas, whole young chicken and braised short ribs. Wash it down with country wines from California or Italy (1310 Main St., St. Helena, (707) 963-7088; cooksthelena.com). 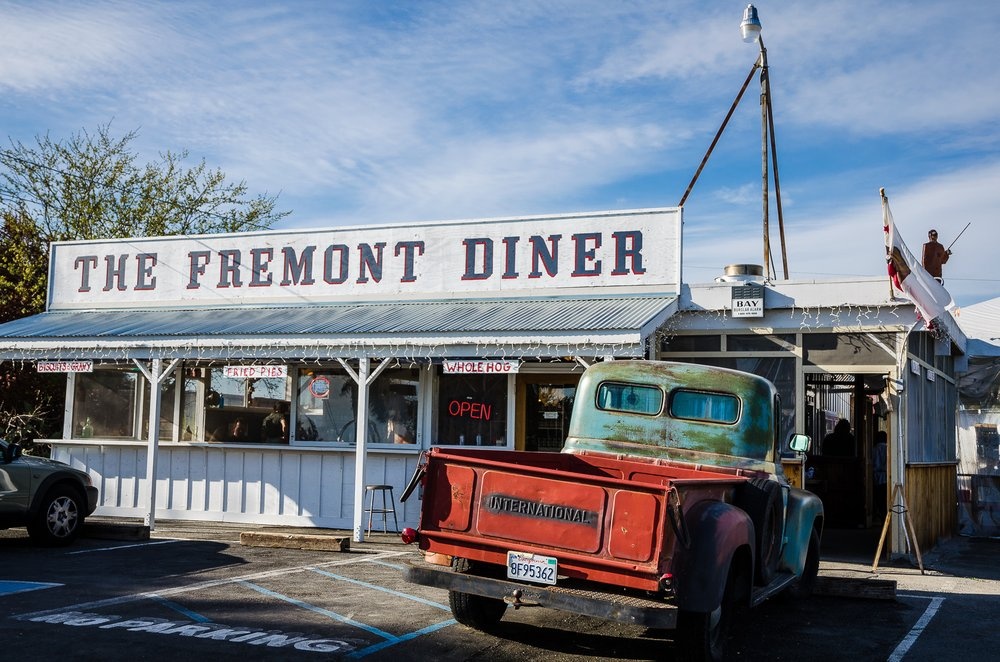 If you like pork products, you’ll love the Fremont Diner. Bacon, sausage, tasso, pulled pork or other swine variations appear in 16 menu dishes (out of a possible 44). Does bacon really enhance the taste of an Oyster Sandwich or a bowl of Shrimp & Grits? In some cases, you’ll never find out: while the kitchen is willing to omit the pork in some items, it occasionally displays inflexibility reminiscent of the diner scene in “Five Easy Pieces.” Enthusiasm for bacon is also required by the fact that the dish you order is not always what you receive. And if you don’t get enough, you can buy a bacon air freshener in the gift shop.

Underneath the biker aspirations of the place (water and soft drinks are served in Mason jars), the Fremont Diner is very much a restaurant of the new millennium. The menu is strictly farm-to-table, featuring the bounty of Sonoma (Bellweather ricotta, Vella asiago, Commanche Creek tomatoes) responsibly sourced. All that bacon and sausage is house made. And on any given day, you’re more likely to see a collection of Millennials and Gen-Xers than a phalanx of dangerous road warriors (2660 Fremont Dr., Sonoma, (707) 938-7370; thefremontdiner.com).

Vintner brothers Joel and Duncan Gott almost created a revolution in Napa last year when they changed the name of this informal eatery from Taylor’s Refresher, one of the icons of California wine country, to Gott’s Roadside. The “mighty fine eats,” however, remain the same---thick grilled hamburgers, fish tacos, chili, shakes made from Double Rainbow ice cream, and an amazing Ahi Burger served with ginger wasabi mayo and Asian slaw. Place your order at the counter and relax at a picnic table in the back. Unless it’s raining or snowing, this is the perfect place to stop and refuel while visiting wineries in Napa, and an outstanding venue to celebrate being alive on planet earth (933 Main St., St. Helena, (707) 963-3846; gotts.com). 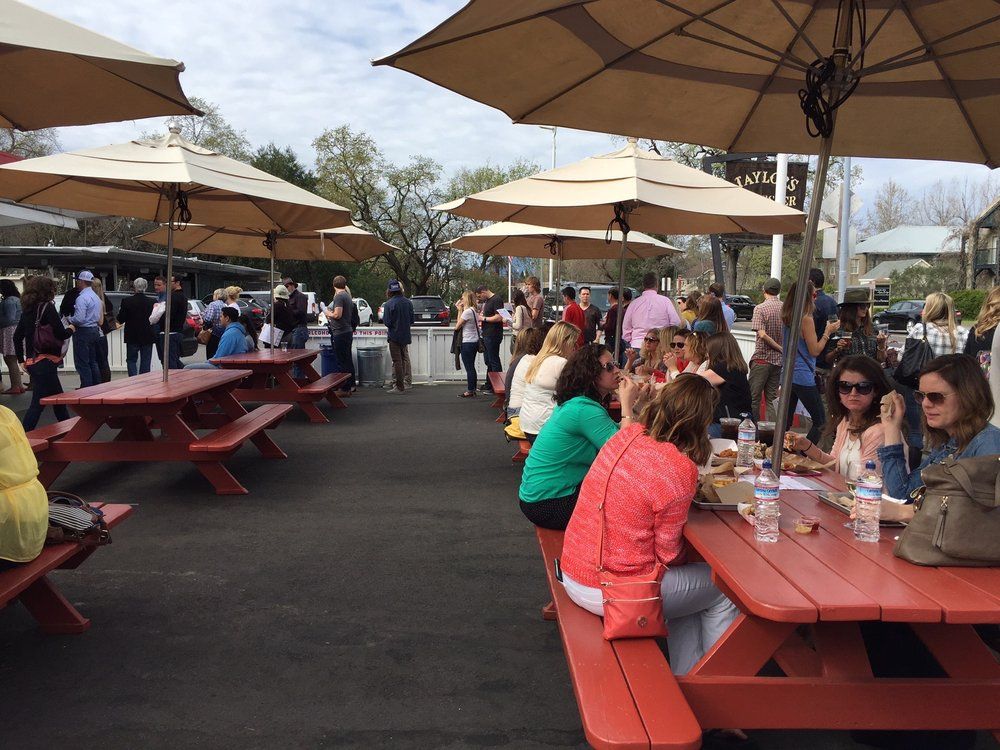 Located in the city of Napa, which has undergone an amazing renaissance over the past decade, Oxbow bears a close resemblance to San Francisco’s Ferry Building in the range and breadth of its offerings. Arrayed in the main hall is a succession of eateries offering fresh, local and sustainable food, as appealing to the eye as they are on the palate. It’s a good place to grab a snack, a full meal or a progressive dinner. Begin with bivalves from the Hog Island Oyster Company, founded in 1983 by three marine biologists committed to growing delicious, healthy oysters for Bay area consumers. The shellfish, nearly three million annually, are raised in the cold waters of Tamales Bay, fifty miles north of San Francisco. Move on from there to Ca’Momi Enoteca for a fish of homemade pasta or fluffy gnocchi, washed down with glasses of regional Italian wine. Round out the evening with a selection of artisanal domestic cheese at Oxbow Wine Merchant and Wine Bar. In addition, there’s a branch of Gott’s Roadside as a seafood market, a bakery, a charcuterie and butcher shop, a gourmet coffee store, a shop selling sustainably produced beef, and---inevitably---a storefront selling freshly made cupcakes (610 1st St., Napa, (707) 226-6529; oxbowpublicmarket.com). 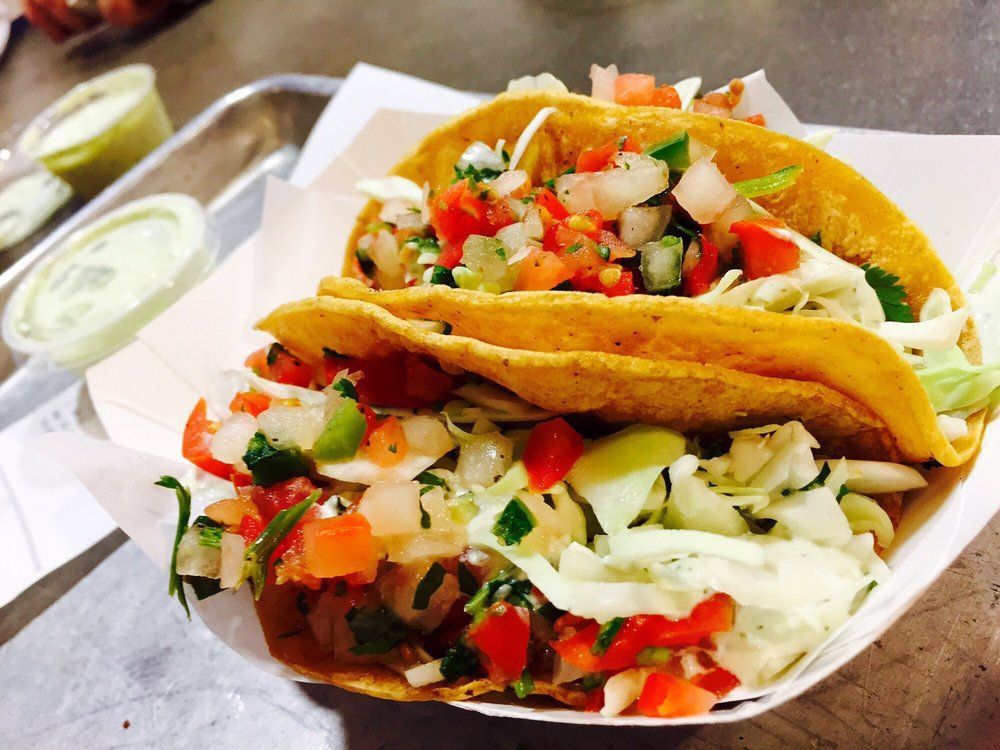 Do you agree with the reviews about these restaurants? Do you have a favorite place that you like better? Give us your comments!