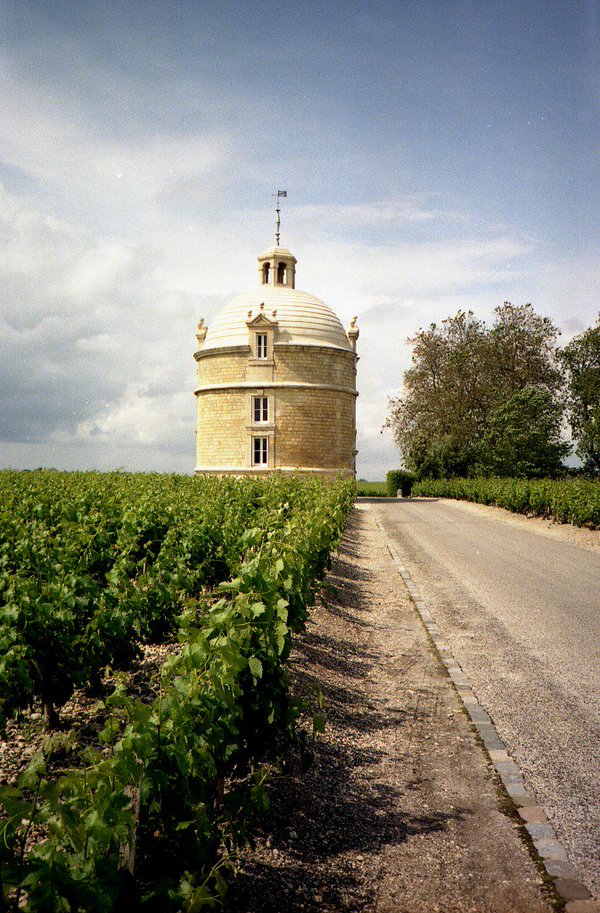 Chateau Latour was a famous wine estate roughly 300 years before the swamp of the Médoc was drained, which converted a mixed-use agricultural region into one of the world's greatest vineyard areas. In October of 1331, the Seigneur of Castillon gave permission to build a fortress on the property, which presumably included the orginal tower. The first mention of Chateau Latour occurred in Froissard's Chronicles in 1378. During the Hundred Year's War, the property held strategic importance, which outweighed the value of any crop cultivated there.

Toward the end of the 17th century, the estate passed into the possession of the Marquis de Ségur, and the modern history of Latour began. Before he died in 1716, Alexandre de Ségur also purchased Lafite. Two years later his son Nicolas, not to be outdone, bought Mouton and Calon. Lafite was always given pride of place in Ségur's vast vineyard holdings, and Latour received short shrift. It was not until after his death, in 1755, that the estate was divided and Latour finally came into its own.

The importance of Chateau Latour as a wine estate was officially recognized in 1855, when the property was ranked as a First Growth in the Classification of Red Wines of the Gironde. The present Chateau was built between 1862 and 1864. In 1963, the heirs of the Marquis de Ségur sold the majority of their shares to the Pearson Group, and Latour passed into English control. The estate was sold to Allied Lyons in 1989. Finally, François Pinault succeeded in purchasing Latour in 1993, and the property was back in French hands.

Under the Pinault regime, Latour has gone from strength to strength. Frédéric Engerer was appointed Director in 1995, and a young, dynamic technical team was installed shortly afterward. The selection process has become stricter, with more of the production declassified into the second wine, Les Forts de Latour, as well as into a wine called Pauillac (first released in 1990).

The heart of the vineyard is the L'Enclos, consisting of 47 hectares (about 115 acres) divided into almost 40 separate parcels. It is from these vineyards, and these alone, that the Grand Vin de Chateau Latour is produced. A meticulous replanting program has been underway in recent years; when vines are pulled up, each parcel is allowed to lie fallow for six years before any new vines are added. While the proportions vary from year to year, the Grand Vin usually consists of about 80% Cabernet Sauvignon, 18% Merlot, with the rest composed of Cabernet Franc and Petit Verdot. It goes into 100% new oak, with a light to medium toast.

Latour has always had the reputation of being the most "masculine" of the First Growths, a rustic and earthy wine of great power. With the technical advances of recent years, the wine has undergone significant changes. It is still full-bodied and powerful, but now displays an elegance and harmony which is truly remarkable. If one is fortunate enough to taste a number of recent vintages at the same time, what comes through very clearly as a common thread is an intensity of fruit and purity of texture.

The following notes were taken during Frédéric Engerer's visit to Palm Beach in 2006. After conducting a marathon tasting and dinner the night before, he generously insisted on tasting with the area's top sommeliers. Many thanks to Frédéric for giving up his day at the beach, and providing this memorable experience. 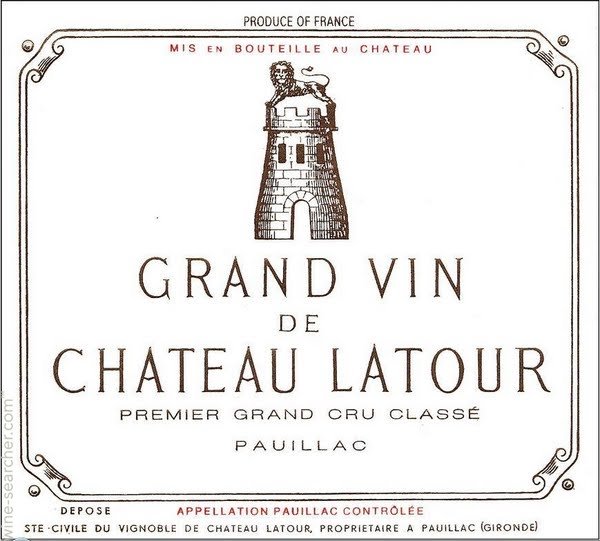 Deep, bright purple-ruby. The nose is sweet, spicy and captivating, perfumed with cherries and Damson plums. The wine enters the mouth effortlessly; it is warm and ripe, with prickly fruit tannins and delicous flavors of plums and dark berries. Finishes with long brushstrokes of anise, menthol, spice and candied plums.

Brilliant, saturated purple. The aggressive nose is infused with aromas of cedar, menthol, anise and blackberry. Compact and medium-bodied in the mouth, the wine exhibits a strong mineral underpinning, a pure and clean texture, ripe blackberry fruit, and long echoes of spice and minerals on the finish. The texture is alive, almost electric, supported by the pristine and succulent fruit. A powerful and focussed wine, still several years away from maturity.

Saturated purple, opaque and brilliant. The nose is amazingly fresh and fragrant, with aromas of blackberry jam, walnut husks, anise and menthol. Concentrated yet seamless, the wine coats the mouth with ripe and beautifully expressive flavors of black fruits and minerals. The texture is pure and balanced, the tannins are large-scaled but supple, and the wine is still 4-5 years away from maturity. A wine of great style, character and grace. At this point in the tasting, knowing that the 2000 Latour was coming our way, I sat up straight in my seat.

Muddy, saturated purple, with some brick on the rim. The nose is fragrant and rustic, with aromas of sea salt, baking spices and candied plums. The oceanic character continues in the mouth, with the salt and spice framing ripe flavors of dark berries and plums, along with hints of tobacco and black olive. Finishes long, earthy and powerful, with long echoes of sweet red fruit. A complex and fascinating wine, mature and ready to drink.

"If we had to keep only one wine today to illustrate the essence of Latour," said Frédéric, "it would be the 2002. A difficult vintage, yet one which is clean and pure, with a backbone of fruit."

Saturated purple-ruby. The nose is dense and tight, with scents of violets, minerals and black fruits. The wine is full-bodied yet compact in the mouth, very well-balanced, with tart and succulent black fruits framed by fine tannins and flavors of ripe, mineral-inflected blackberries. Finishes long, tart and earthy, with spicy echoes.  Why is it that everyone always seems to love their problem child the best?

Sometimes, you just have to say "Wow!" Saturated inky center, with a purple rim. The nose is closed and tight, revealing aromas of anise and melting chocolate with coaxing. Full-bodied and profoundly concentrated, the wine has decades to go before it shows its best. It is pure and ripe, with succulent, mineral-inflected flavors of anise, blackberry jam and chocolate. Even at this stage, it is seamless and easy to drink. Finishes with long echoes of earthy black fruits. A massive wine, yet poised and well-balanced, holding back for the future.

Saturated purple-ruby. The nose is loose-knit and rustic, infused with aromas of cinnamon, clove and anise. Medium-bodied, ripe and forward on the palate, it reveals a luscious core of mocha flavors and blackberry fruit, but lacks the intensity and tannin structure of the other vintages. The finish is moderately long and ripe, with hints of plum and espresso. Drinkable now.

I first tasted this wine in 1996, during a visit to Chateau Latour; it had been in barrel for one year, and had not yet been bottled. It was fascinating to revisit it now. It had a bright, deep ruby-purple color and a volatile, assertive nose, with saline aromas framing scents of blackberry and anise. The wine was medium-bodied in the mouth, ripe and cedary on entry, with a frontal assault of fresh blackberries; the tannins are stiff, still unresolved, and the fruit has a poised, tart and pert quality. Finishes with long echoes of sea salt, pickled plums and liquorice. Like many 1995s, it is approaching drinkability; it seems less impressive than it did ten years ago, but far more exotic.

Saturated purple center, with a brickish rim. The nose is alive with exotic aromas of leather, Asian spices, cedar and pickled red fruits. The wine is full-bodied and hedonistic in the mouth, just as ripe and unusual as it appears on the nose. It is total pleasure: ripe, sweet tannins; glorious old-vine fruit; a beautifully integrated acid structure; ripe, succulent flavors of dark berries and plums. Finishes very long, with persistent fruit and a panorama of fresh herbs and spices. 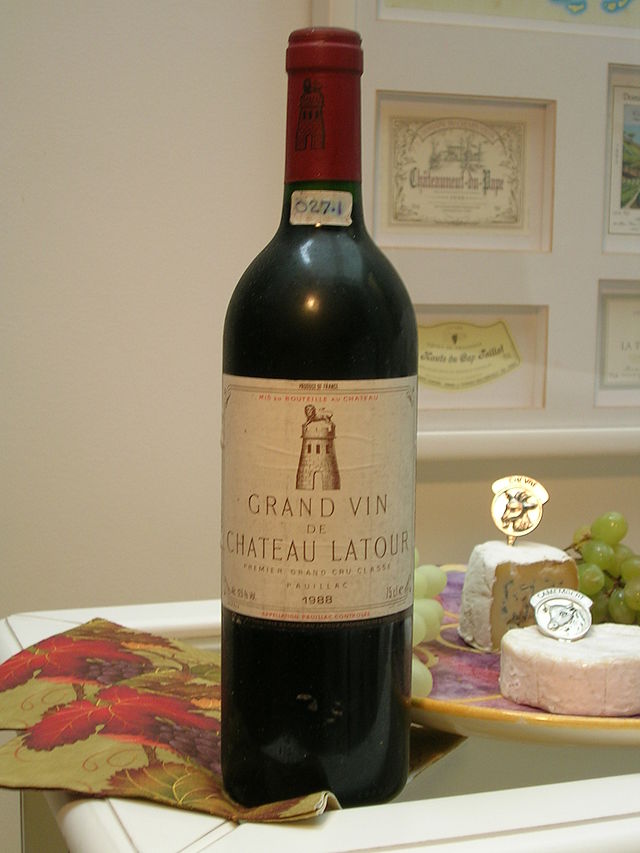 Do you have a favorite vintage? Have you been to the estate, and did you have a special experience there? Share your comments and insights with the community!