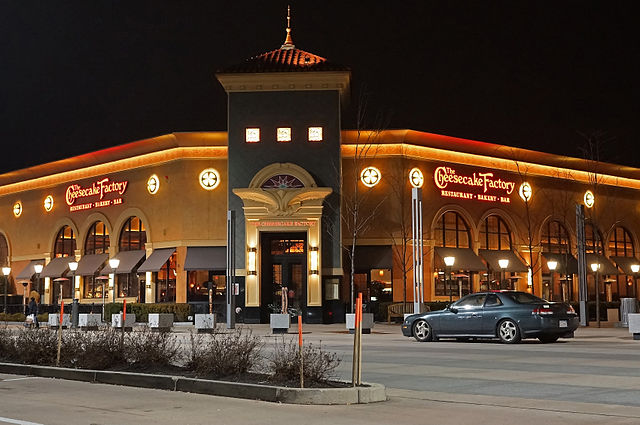 I am not a fan of the Cheesecake Factory.  I am very aware that hordes of people like the restaurant enough to wait for hours to get into it.  I am aware that many people absolutely love the place.  I’m familiar with it because my kids dragged me there several times when they came for visits, and I can see that The Cheesecake Factory can be pretty attractive if you’ve been living on McDonalds, Taco Bell and pizza.  But bottom line, the place reminds me of an old joke:  two old ladies are at a restaurant and one says, “The food here is terrible.”  “Yes” says the other, “and such small portions.”  In an amazing feat of marketing, the restaurant has changed that joke to a new math that says Average Food + HUGE Quantities = Great Food.  I just don’t get it.

It all began in 1949 in the Detroit basement of Oscar and Evelyn Overton.  Evelyn baked New York-style cheesecakes for her husband’s employer, who would order them as gifts.  They grew the business into a small bakery still operating out of the family basement until the early 1970s when their son, David, persuaded them to move to the West Coast and set up a full-time business.

The Cheesecake Factory bakery opened in 1972.  Six years later they opened a restaurant in Beverly Hills as a showcase for Evelyn’s products.  The first menu featured omelets, sandwiches and desserts, and very big portions.  Other restaurants followed but it took 13 years to branch out beyond California.  Then the business really took off.  Today The Cheesecake Factory has about 120 restaurants, a fanatically loyal following, and is an American success story.  The average CF restaurant does over $11 million in business which translates to $1,000 per square foot.  That’s more than any other restaurant chain and over three times the national average.

As a former marketing professional, I am in awe of the business model.  They put the restaurants in upscale areas, often shopping centers or malls, where there are 250,000 people within five miles, with household incomes of $50,000 to $75,000, and that threshold is often greatly exceeded.  Those shopping centers are very happy to have them because the restaurant attracts the very people that the retail merchants want exposure to.  In fact, landlords sometimes pay a considerable percent of the restaurant’s building costs just to have them there.  The company estimates that 80% of their customers leave with leftovers.  An average store serves 3,000 people in the course of a day.  That means 2.400 people wandering around a mall carrying Cheesecake Factory bags too colorful to miss.  No wonder they don’t have to advertise.  The customers are doing it for them.  Between the shopping bags and word of mouth they have become a destination restaurant without even trying. 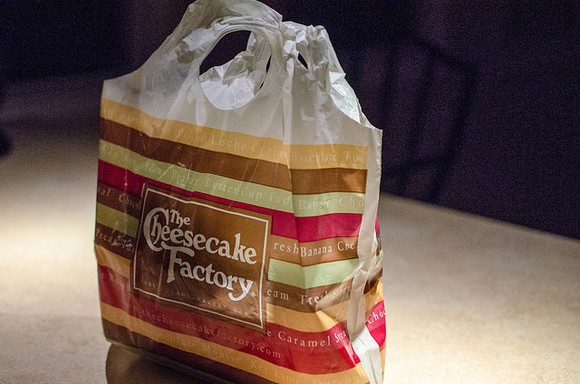 As you may have guessed, the Great Dane-sized portions are no accident.  I’m pretty sure that they are the source of much of the chain’s profit.  It costs a certain amount to have you come in, sit there for an hour and dine.  Say that between rent, heat or air conditioning, lights, the wait staff, cooks and management, it is a fixed cost of $4.  The variable cost is the food.  For example’s sake say that costs $1, bringing their cost to $5 for a meal they could charge you $10 for.  Now if they double the amount of food and charge you more, say $16, do the math.  Their cost went to $6 but the profit went from $5 to $10 because you just paid $6 for your doggie bag of uneaten food.  Of course these numbers have no connection to reality but you can see how it works.  Pretty smart way to run a restaurant.

Founder David Overton once said The Cheesecake Factory served “kicked-up coffee shop food”.  That’s not a bad description.  Personally I would call it unintimidating food.  The Tex-Mex is not really Tex-Mex.  The oriental entrees are much too mild to be close to the real thing.  There is a bit of a heavy hand with the salt shaker throughout.  The cheesecake is good but a little too sweet for my New York taste.  It is all kind of dumbed down food designed to appeal to the average American.  The compromise offered is one that I think is common in chain restaurants across the country.  You get very predictable food that is by no means bad, but is by no means great either.  For that you trade off the possibility of getting something wonderful in a local restaurant that specializes in a type of cuisine but comes with some risk.

I recently went to a local Cheesecake Factory for lunch with a friend to make sure my memories of the place were still correct.  To my surprise we were told that the wait would only be about 20 minutes.  The estimate proved to be accurate and we were soon seated and being well looked after by our server who was cheerful and attentive throughout the meal.  The restaurant has mirrors everywhere, marble floors, marble table tops, hand painted walls, linen napkins and heavy cutlery.  It has a nice adult feel to it and gives the impression of a somewhat upscale eatery.  It’s not the place for a cheap family dinner (no children’s menu) and is too noisy for a quiet romantic date, but it’s comfortable enough.

After going through the over 200 menu items, I began by ordering a cappuccino ($4.50).  It came in a very oversized cup that I found a little hard to handle.  I am strong and athletic, so I think some customers might really have difficulty with it.  Avocado egg rolls were recommended as an appetizer to share.  I had ordered them previously and remembered thinking that they were tasty but kind of mushy.  We ordered Tex-Mex egg rolls ($8.95), tasty but kind of mushy with hints of Tex-Mex flavor.  I then ordered Hungarian Beef Goulash ($15.95) and my friend ordered the Shrimp and Crab Salad ($15.50).  The goulash didn’t taste bad but neither of us could detect much paprika in it.  The salad featured the seafood in a mild Louis style dressing over a very large amount of greens.  No raves, no complaints.  Neither of us came close to finishing our plates.  We then shared an order of Godiva Chocolate Cheese Cake ($7.50), a very sweet dessert served in a diabetes-on-a-plate sized portion.  The thought of someone finishing that slice by themselves is scary.  With tax and tip it all came to $65, not inexpensive for what we got. 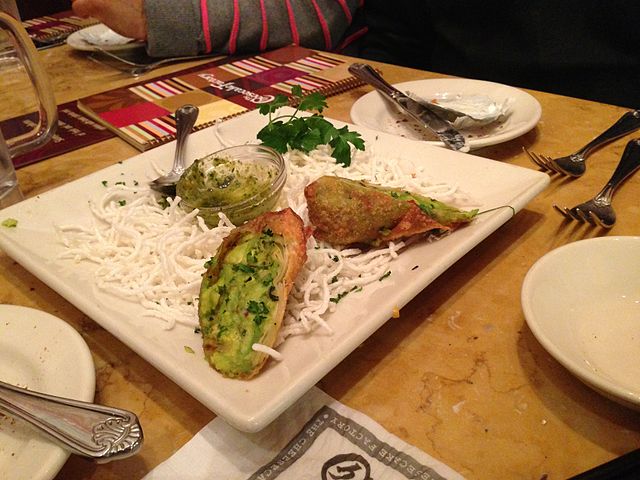 The Cheesecake Factory doesn’t publish nutrition information.  I think they know the horrific press such a move would generate.  Rumors on the web are that some of the salads such as Chinese Chicken and Thai Steak top 1,000 calories each.  Some pasta dishes are said to approach 2,500 calories and some of the desserts may clock in at over 1,500 calories.  We’ll never know, but it’s not health food.

But what about wine, you ask?  Of course they have wine.  They have everything.  First you have to find the wine list in the little spiral-bound menu they give you.  Go past the Margaritas, past the Specialty Martinis and there it is, right between the Coffee Drinks and the beers.  The list features Cheesecake Factory branded Chardonnay, Merlot and Cabernet by Robert Mondavi.  No one could explain to me what this really was other than to say it was Robert Mondavi wine.  I already knew that.  Most of the wines seem to be a core list available in any CF restaurant.  It is largely mass produced wine, available anywhere that they probably get a good deal.  Much of it is supermarket wine such as Kendall-Jackson Vintner’s Reserve Chardonnay (speaking of things that are too sweet), Beringer White Zinfandel, Columbia Crest Cabernet, Rosemont Estate Shiraz and Ruffino Chianti.

There are a few "nice" wines scattered throughout such as Sonoma-Cutrer Russian River Ranches Chardonnay, Bonny Doon Pacific Rim Riesling, and Champagnes such as Pommery Pop and Veuve Clicquot.  The local list seemed to be enhanced by a few wines that were not shown on the Cheesecake Factory website, which I assume reflects the core list.  They included a Ferrari Carano Chardonnay, a St Francis Cabernet, a Markham Merlot and a Chalone Pinot Noir.  Nice wines, but you’re not going to find anything unusual or small production.  Except for the champagnes, bottle prices range from $22 for a Woodbridge Cabernet to $50 for the Ferrari Carano.  All are available by the glass.  The wine list is like the food.  There’s nothing really bad, (well, maybe the white zin), but there’s little really exciting either.

I usually talk to an executive in the company to develop a picture of the restaurants I write about.  I tried hard to reach the Vice President of Business Development and Marketing at the Cheesecake Factory.  Numerous phone messages to him and his assistant went unanswered.  Finally I called one day and he picked up the phone.  He agreed to an interview but asked that I send him an idea of what I wanted to talk about so he could prepare.  I sent him a few wine related questions.  In spite of follow up phone calls and emails I never heard from him again.  I don’t blame him.  There’s not much of a wine program to talk about.  It’s a shame.  With an eclectic menu like they have The Cheesecake Factory could really have some fun doing wine and food matches.  And as I said before, I really admire the marketing job the company has done and would like to have talked to him about it.  As it is, all the information in this article had to come from publicly available sources.

I think we’re going to see Cheesecake Factories for a long time. One thing should give them pause however.  I started to introduce my kids to good fish places, real ethnic restaurants and other excellent local choices when they came to visit.  The requests to go to The Cheesecake Factory have stopped. 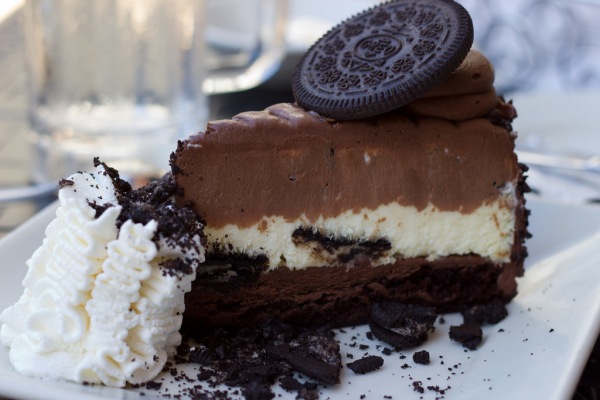 Do you agree with this review? If not, give us your comments and share them with the community!