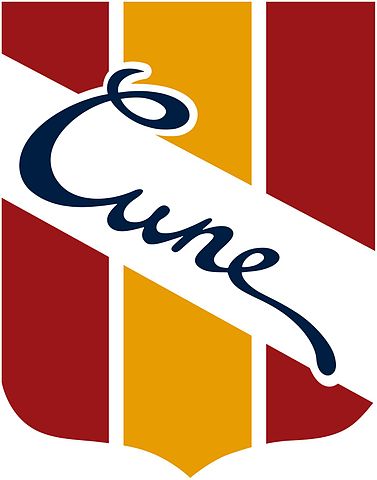 CUNE, or the Compania Vinicola del Norte de Espana (the Northern Spanish Wine Company), was founded in the Rioja town of Haro in 1879. It was a heady period in the region. Marques de Riscal, the first major estate, had been established in 1850, and Marques de Murrieta had appeared on the scene in 1877. Most importantly, the great vineyards of Bordeaux had been ravaged by phylloxera about a decade before, and Rioja, for lack of other alternatives, was suddenly in great demand.

From the beginning, the category had been unabashedly modeled on Bordeaux. The Spaniards followed the Bordelais practice of blending, subscribing to the theory that a blended wine became more than the sum of its parts. Rather than Cabernet Sauvignon, Merlot, Cabernet Franc, Petit Verdot and Malbec, they used the local varieties---Tempranillo, Garnacha, Graciano and Mazuelo. Like Robert Mondavi one century later, they placed enormous (even exaggerated) importance on the practice of oak aging. If thirty months in barrel was good enough for Chateau Latour, then five years became the standard for Rioja; the wine might not turn out to be twice as good, but why take chances?

Rioja wines were winning medals at international competitions from the 1860s onward, and started to become fashionable. The golden age occurred after 1880, when railroads came to the area, and Rioja could suddenly be shipped to port cities for export; the destruction of the French vineyards intensified worldwide demand for other full-bodied, cask-aged red wines. The boom lasted until shortly after the turn of the century, when phylloxera finally reached Spain, and never really returned until after the death of Franco.

CUNE, in the meantime, had been on the cutting edge of innovation. The Monopole brand was introduced in 1915, as a reaction against the clumsy, oxidized white wines of the period. The Imperial wines were first produced in 1928, and became known for Reserva and Gran Reserva bottlings, only made in exceptional vintages. From vineyards purchased in Rioja Alavesa, the Vina Real range was launched in 1940, encompassing whites, Crianza, Reserva and Gran Reserva. Rioja's Bordeaux origins came full circle in 1973, when CUNE established Contino on the model of the traditional Médoc chateau : a small manor house surrounded by just enough vineyard land to manage conscientiously, including several designated, old-vine parcels.

Spanish wine was abruptly catapulted into the modern era in 1989, when the country joined the European Community. Rioja once again became popular in export markets, much as it had been 100 years earlier, and international tastes suddenly had to be taken into account. There has been a tremendous influx of foreign capital and talent flooding into Spain in recent years, and Rioja has changed as a result. The wine is far less rustic than before; the periods of cask aging have been greatly reduced, to allow for a more forward and appealing fruit profile.

Like most producers in Rioja, CUNE has been trying to meet the challenge of retaining their traditions in a world market dominated by wines like California Cabernet. It is far from an easy task; the average consumer who spends $40 or $50 for a bottle will not easily accept a wine which is funky, dried out, or which smells like the barn their ancestors escaped from. At the same time, such a consumer is on a constant search for new sensations and experiences. Thus far, the results are encouraging. A trained palate could still identify these wines as Rioja in a blind tasting, yet they are both approachable and a pleasure to drink. They have not lost their identity or sense of place, yet they have some appeal to New World palates. Let's keep our fingers crossed they stay that way.

Throughout its history, Cune has been an innovator: they created their Monopole, the first white Rioja, in 1915, and introduced a rosé from their sister winery, Vina Real, founded in 1920. In recent years, they have also been among the first Rioja bodegas to cut back drastically on barrel aging, responding to the public demand for a fresher style of wine. Today, both the Monopole and the Rosado see no oak at all, and the results are delightful. 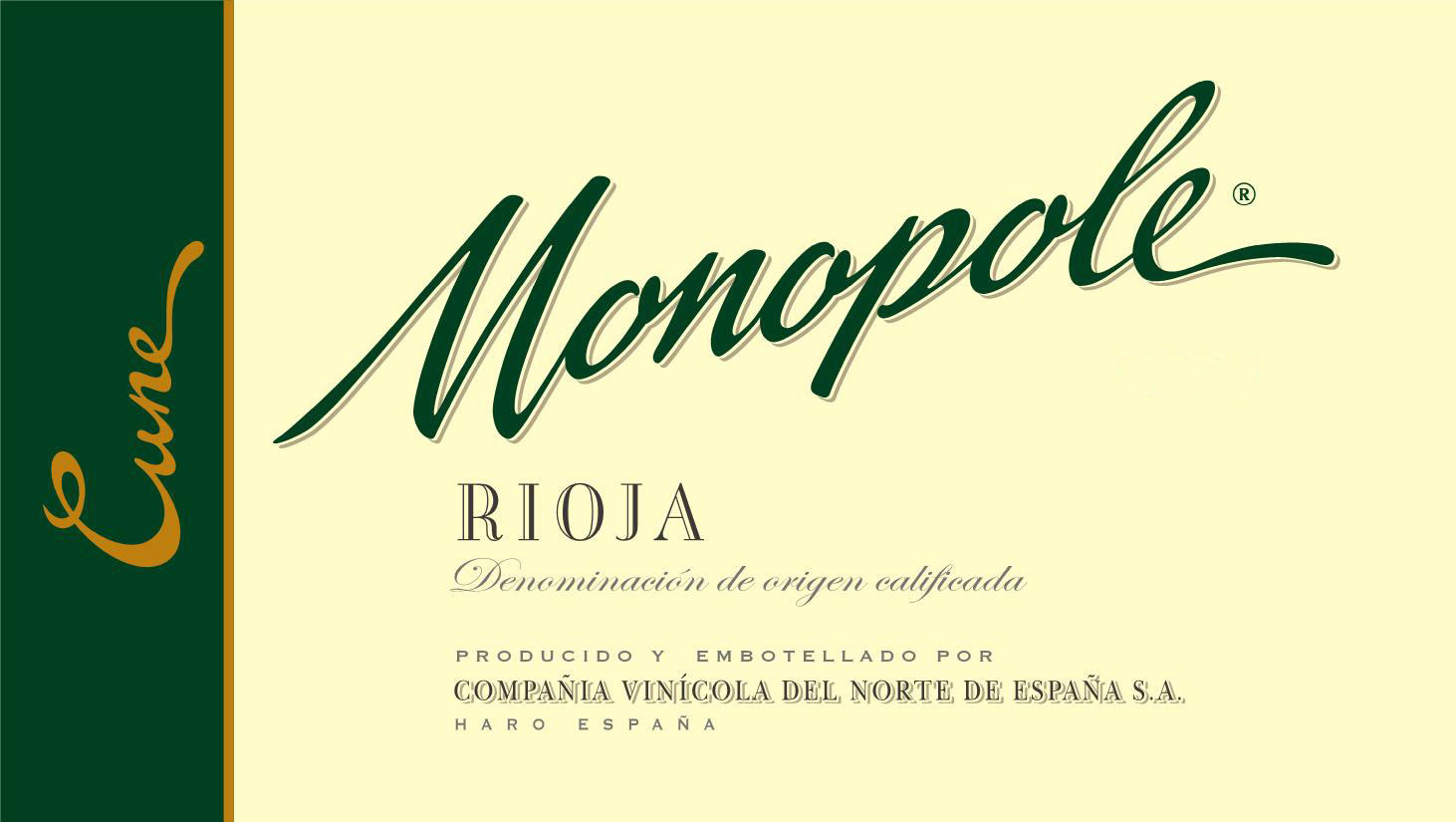 The floral nose of the 2014 Monopole ($14) yields scents of green apple, lime and fresh-cut melon. The palate delivers crisp acidity along with a bright, steely texture. This wine cries out for oysters, and would be perfectly at home on a hot day around the pool.

The 2014 Vina Real Rosado  ($15) is even better. It has a pale salmon color and a nose perfumed with aromas of wild strawberries. In the mouth, the wine is beautifully balanced:  soft, ample and slightly rich, with red berry flavors offset by earth notes and good acidity. Faint hints of white pepper emerge on the finish. When it comes to food pairings, remember the advice of Julia Child: “Rosé goes with everything.”

90% Tempranillo, 4% Garnacha, 4% Mazuelo and 2% Graciano. Deep, full ruby-red. The nose is warm, earthy and expressive, infused with aromas of minerals, black plums, anise and menthol. In the mouth, good acidity and vivid flavors of plums and fresh herbs are marred by a light and tart texture. The finish is short. While it does not deliver the fruit or amplitude promised on the nose, this is a good effort in a decent (but not noteworthy) vintage.

Primarily Tempranillo, from vineyards in Rioja Alta. The wine has a soft, ruby-crimson color and a nose deeply scented with aromas of black cherry jam, anise and baking spices. It is medium-bodied and high-strung in the mouth, with lively acidity and vivacious fruit tannins; the midpalate is filled with succulent red fruit flavors, and the texture is compelling, inviting you to take another sip. Finishes with long, gentle flavors of cherry and cranberry.

Deep ruby-red, with some brick seeping in at the rim. The nose is frangrant and earthy, with profound aromas of stewed plums, anise and wet forest floor. The wine enters the mouth effortlessly, concentrated yet soft as a baby's bottom; the midpalate reveals elegant flavors of black cherries, plums and rhubarb, along with good acidity and beautifully resolved tannins. The long finish features echoes of anise-infused black fruits. Textbook Rioja, fully mature and ready to drink.

85% Tempranillo, 10% Graciano, 5% Mazuelo. It has a deep, bright ruby-purple color and a restrained, Bordeaux-style nose---ripe and compact, revealing whiffs of cedar and blackberry. It is richly concentrated in the mouth, medium to full-bodied, revealing a ripe coulis  of black fruits nicely supported by acidity and spice. The wine makes a vivid impact in the midpalate; the finish is very long and mineral-infused, with hints of earth and truffle on the extreme length. Not a typical Rioja, by any means, but a very well-crafted and impressive wine.