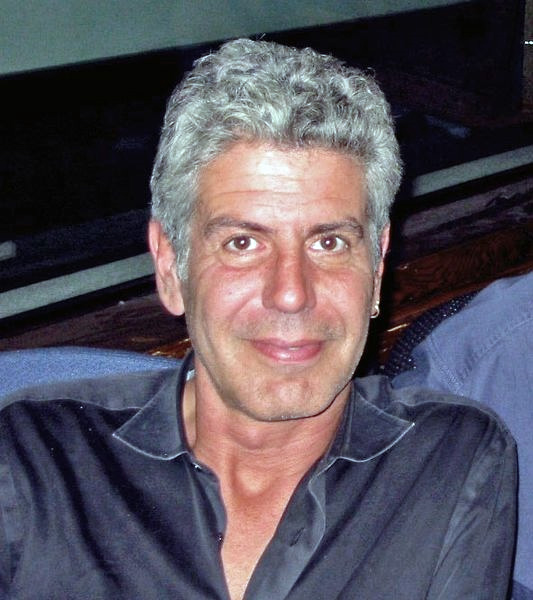 I longed to walk the crowded streets of the old city of Hanoi.  I wanted to experience the smells of the street food vendors mixed with the exhaust of the four million motor bikes of the city.  I desperately wanted to sit on a small plastic stool with a bowl that Bourdain describes as containing something that you’re not exactly sure what it is but is delicious.  I knew I needed help to do this right.  Even Tony has fixers.  So I had arranged to do a street food crawl accompanied by a knowledgeable local the first night I was in Hanoi, literally hours after I landed in Vietnam.

When in Vietnam the first thing you need to learn is how to cross the street.  As mentioned above, there are a few motor bikes, along with some cars and some regular bikes in constant motion.  (The motor bikes, by the way, are encouraged because there’s not enough room for cars.)  Traffic laws, if there are any, seem optional.  However, Vietnamese people are very nice and the drivers are not out to get you.  You quickly learn to look both ways, because no matter what the signs say they could be coming from any direction.  When there’s an opening start to walk.  The key is don’t stop.  They will avoid you, but if you stop you mess everyone up.  It is like the parting of the Red Sea, but you will make it to the other side.  After about three streets you become amazingly comfortable with the whole system, and that’s good because the sidewalks, when you can even walk on them, aren’t much better.  In two weeks, all over Vietnam, I lived to tell about it and saw exactly zero motor bike accidents. 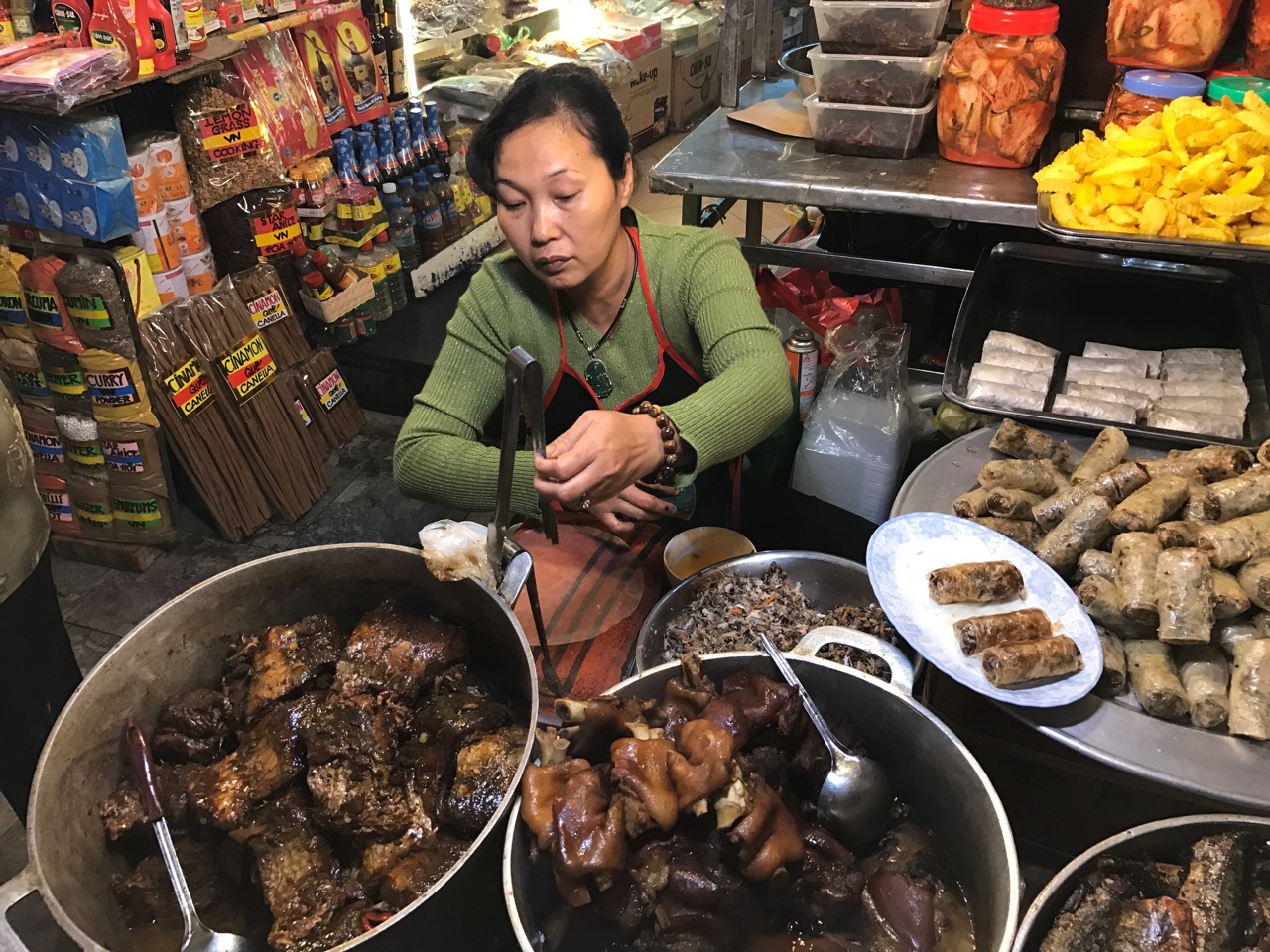 Our first stop was a lady sitting in a small stall on the street making fresh spring rolls.  These were pretty good size, hefty looking things made of pork and vegetables with a thin rice wrapping.  They were the first thing I ate in Vietnam.  One bite and I knew this was going to be a great two weeks.  They were very light.  They were very fresh.  There was a virtual explosion of flavor in my mouth.  They were amazing. 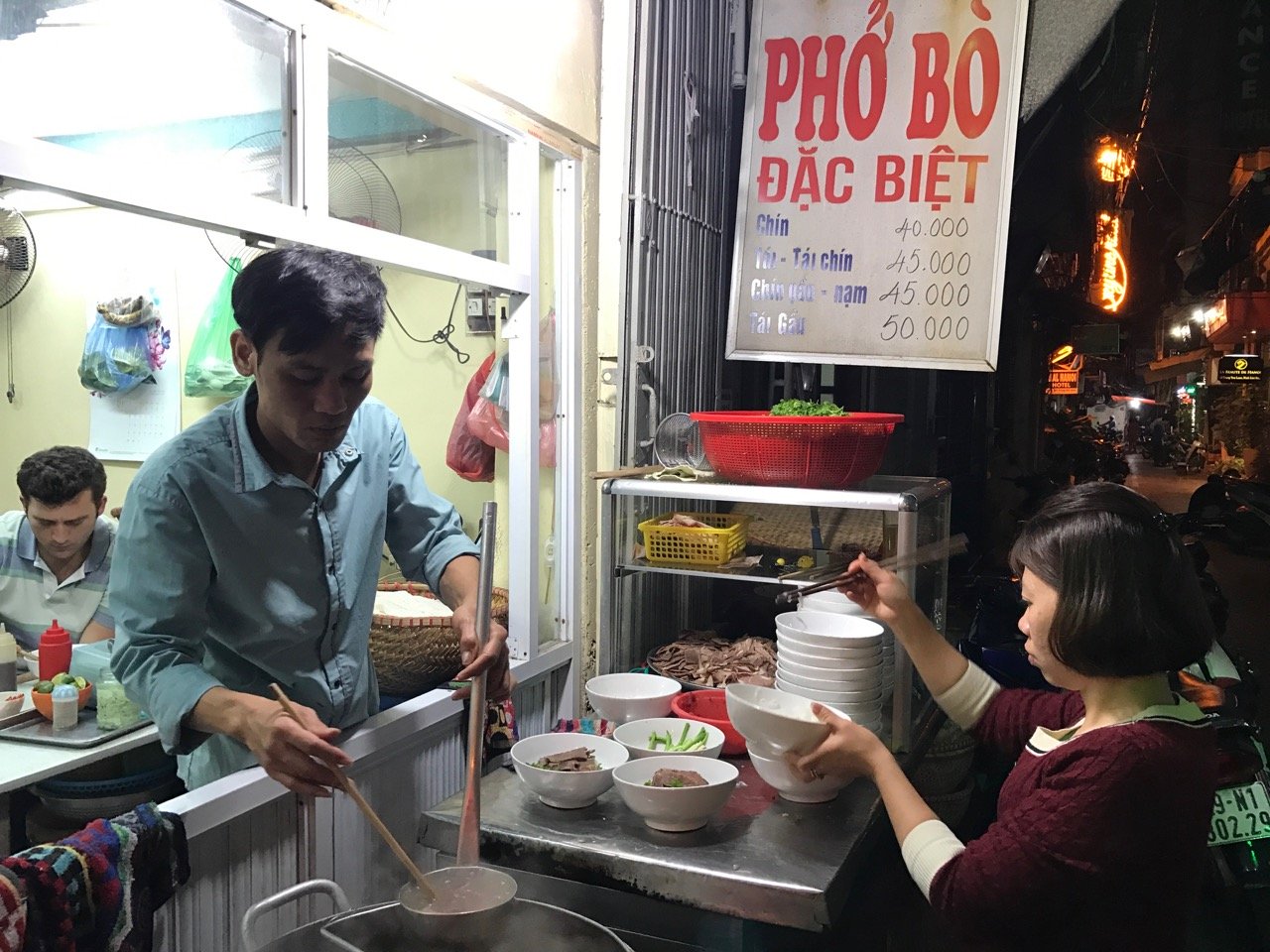 Next up was Pho Bo, which is beef Pho.  (Pho Ga is chicken Pho and is less common but available everywhere if you look.)  Pho, which is pronounced “fuh”, is ubiquitous.  You can’t go three blocks in any city without finding it.  If you’ve never had Vietnamese food, it’s basically beef noodle soup, made by cooking beef bones for about 8 hours.  The noodles are fresh and cut like linguini.  You add fresh vegetables and fresh herbs, as well as chilis and lime, to your taste.  No sriracha to be found anywhere.  Again, very light, very fresh, very delicious. 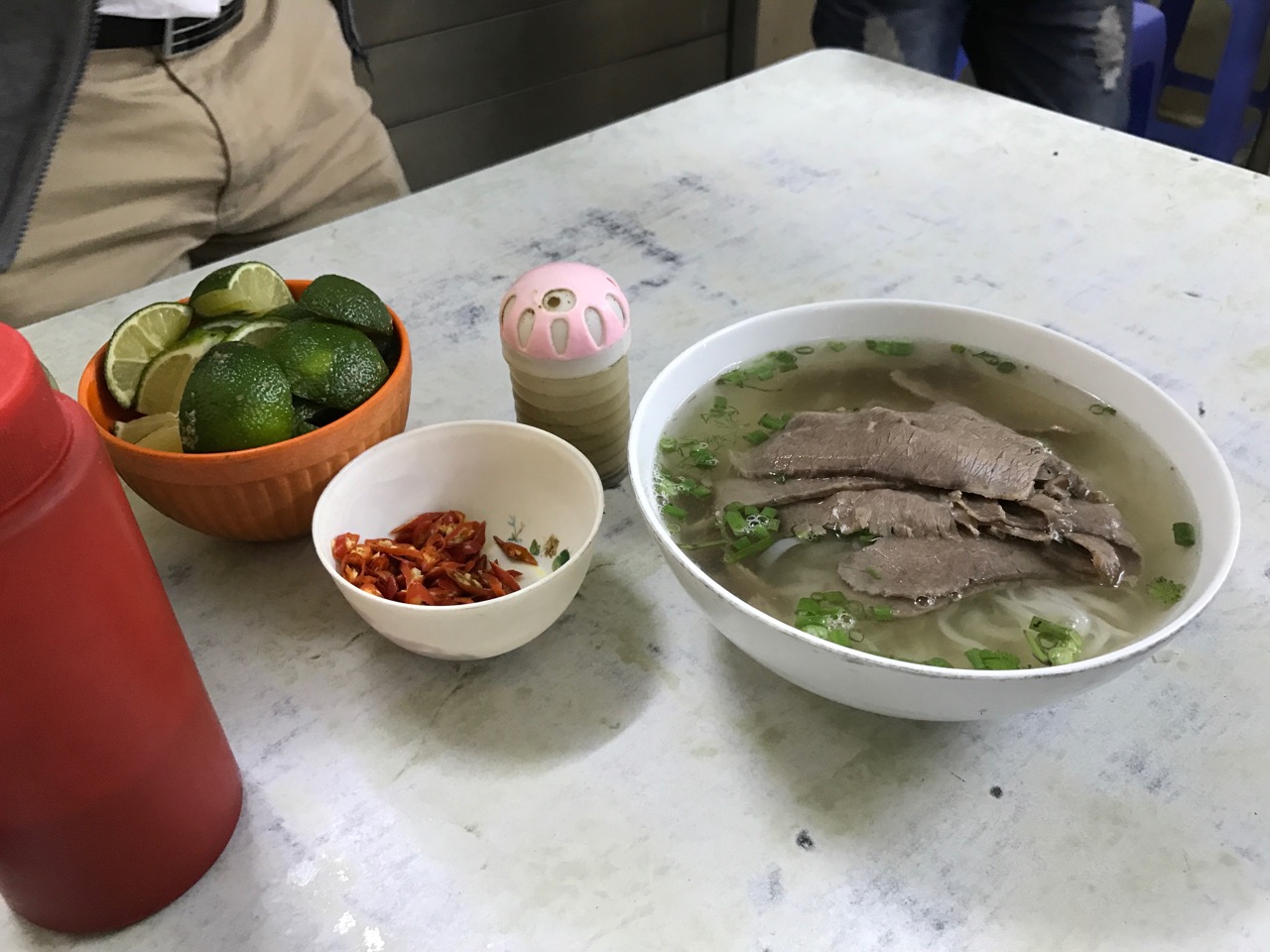 We next went to a very casual restaurant which was on 4 levels with about 10 tables per level, all outdoors except the ground floor.  It was as much a hangout for young people as anything else.  (Everyone in Vietnam seems to be between 25 and 35.)  People packed in, each table seating more than it seemed possible.  Everyone was drinking Hanoi Beer, which was excellent, and eating Xoi Ga, sticky rice with chicken.  The chicken was dark meat shredded and cooked with scallions, five spice flavor, soy sauce, fish sauce, and who knows what else.  Great taste.  This seems to be a local take on the Chicken Rice I had in Singapore.  It turned up all over the country, sometimes with yellowish rice that clearly had turmeric mixed in, sometimes with sausage in the dish.  In the chaos I forgot to take a picture but trust me, it looked like chicken pieces over rice. Like everything else in this country, it’s a sophisticated dish that just looks simple.

We then proceeded to a stall that sold Banh Ran.  This is a deep-fried rice ball made from glutinous rice flour which usually has a sweet filling made with bean paste and jasmine flour essence in the middle and sesame seeds on the outside.  They had that, but the version we tried had pork and mushrooms, along with a little sweet bean paste as a filling. It was basically a pork donut.  What a concept.  Wait until Dunkin hears about this.  I liked it so much I had one of the sweet ones for dessert. 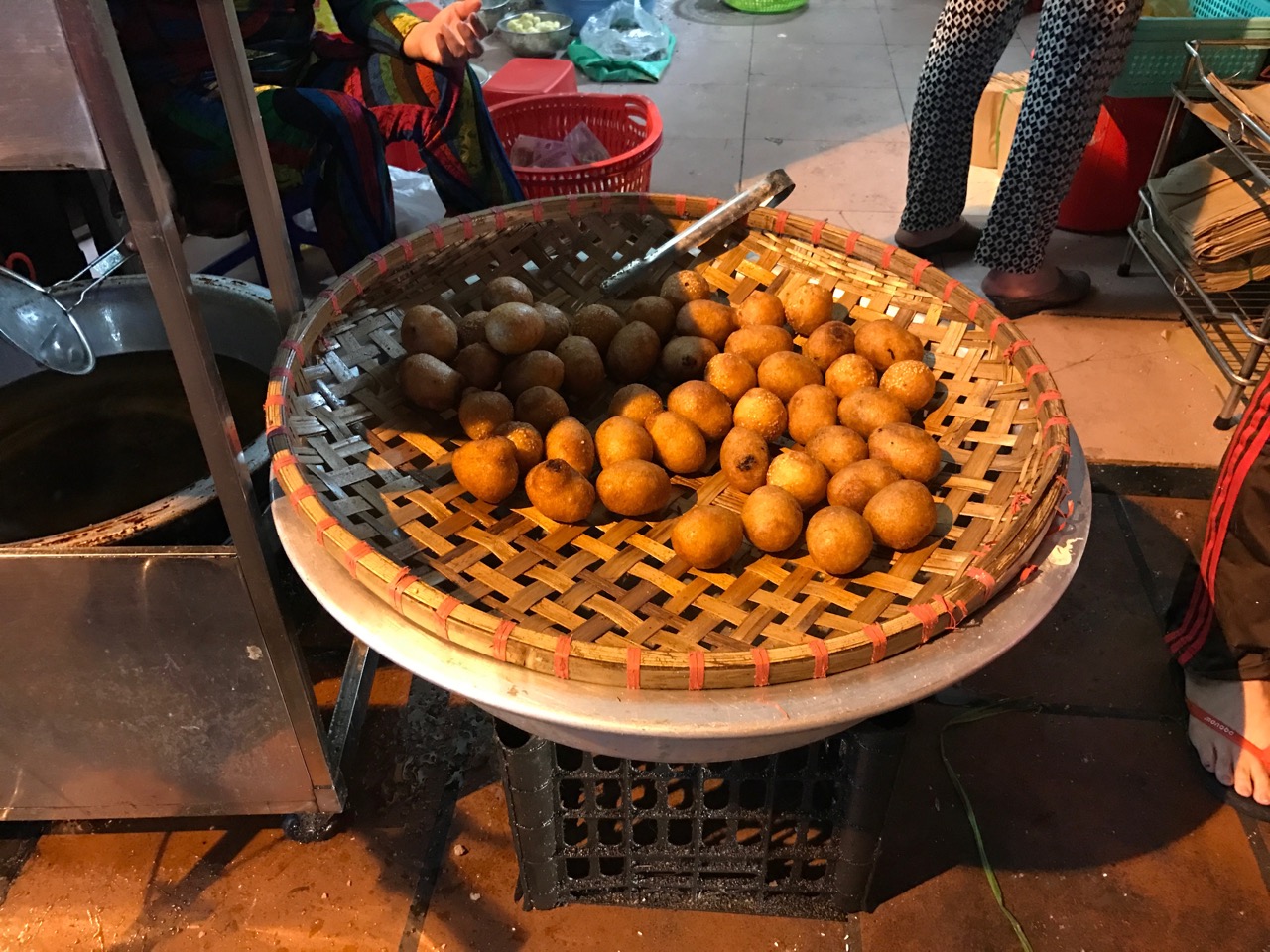 Next up was Bahn My, which basically translates to bread.  I gather there are many things that go by that name but this was a baguette stuffed with pork pate, pickles and vegetables.  It is quite the craze in Hanoi.  I found this not only tasty but very interesting because it was the only thing I saw in two weeks that I thought was influenced by the French.  This is odd because they occupied Vietnam for 100 years but apparently had little contact with common people and little influence on the cuisine, at least on the street food. 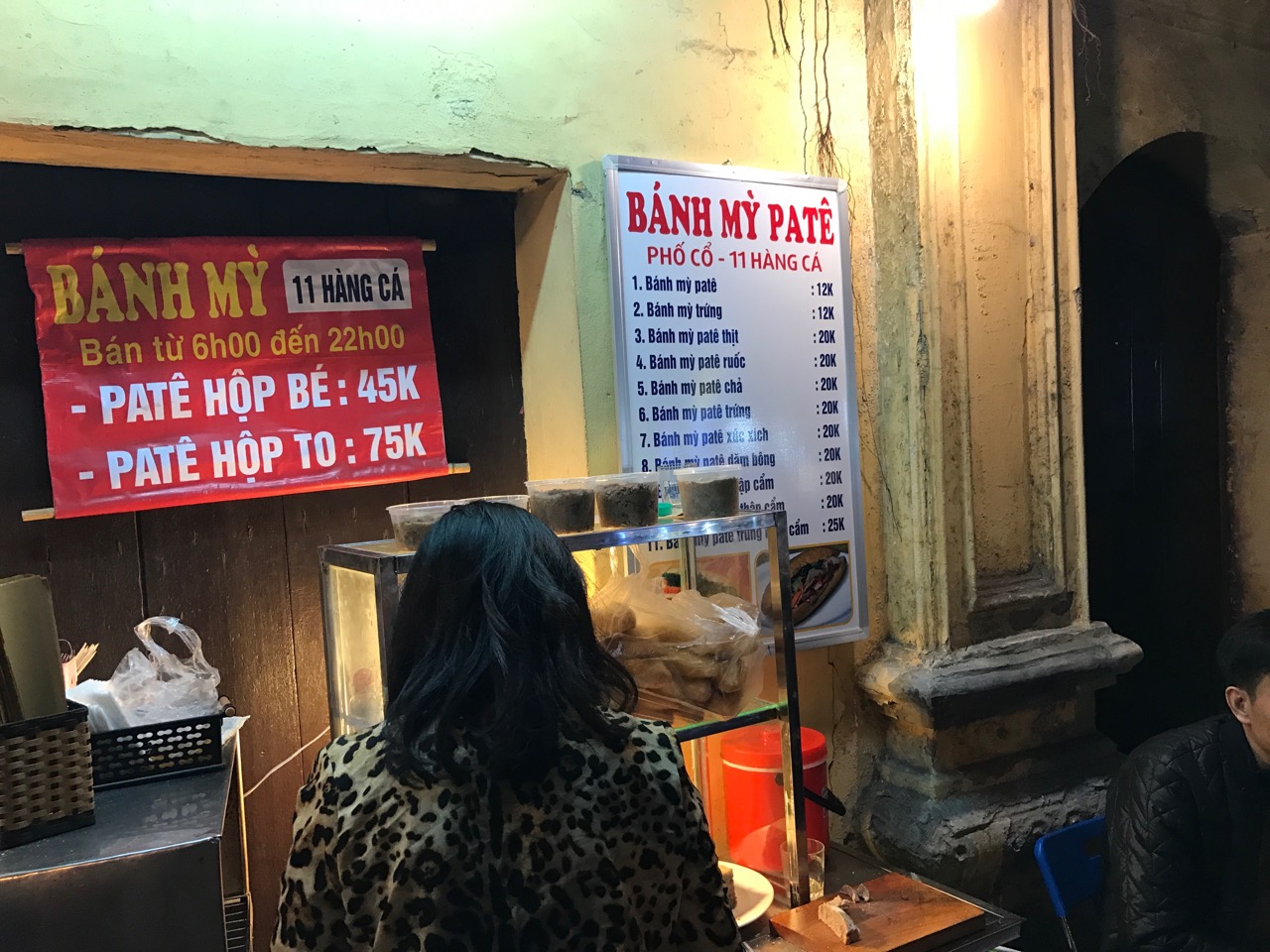 Full as I was getting, we pressed on.  There is much to try in this country.  Banh Cuon is thin sheets of steamed fermented rice batter filled with a mixture of ground pork, minced wood ear mushrooms and minced shallots.  It is served with dry fried onion on top along with fresh coriander.  The dipping sauce served with it is Nuoc cham, the local version of the fish sauce seen all over this part of Asia.  Once again, this was very light and tasted just as good as it looks.  I was starting to understand why Bourdain wanted to move here. 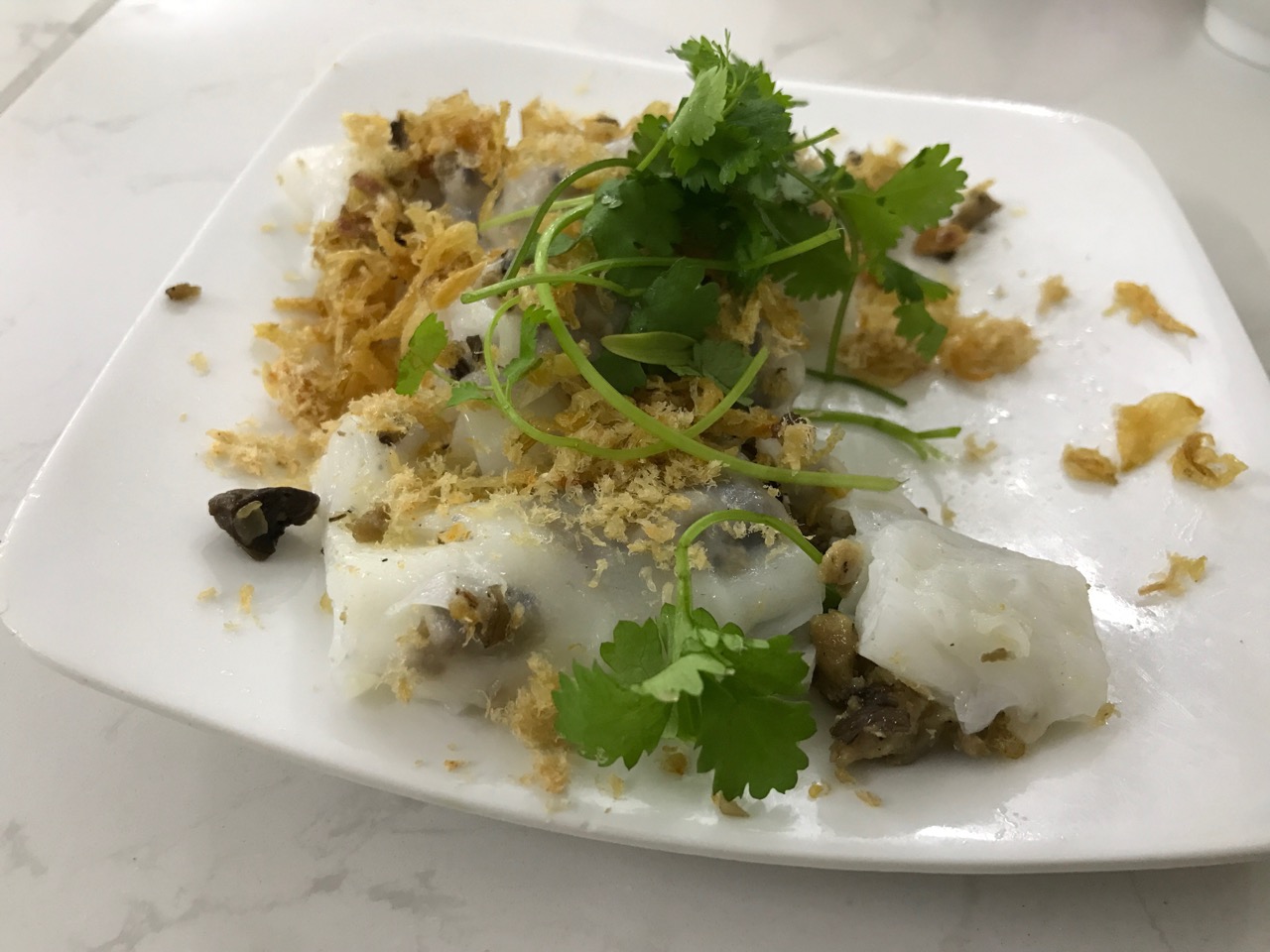 Finally, the dish I most wanted to try, Bun Cha.  This is what Bourdain had with President Obama in Hanoi.  It originated in Hanoi and is very popular there, but not seen much in other parts of the country.  It is rice vermicelli, chargrilled marinated pork patties, fresh vegetables and herbs, pickled vegetables, and a broth to dip the noodles in.  The broth contains fish sauce, vinegar, sugar, red chili, garlic and lime juice among, I’m sure, several other ingredients.  I was expecting pieces of pork, but the patties that were marinated in scallions, chives, dark soy sauce, garlic and pepper were even better.  You dip the noodles into the broth and then attack the rest of it any way you want to while thinking deep thoughts and reliving great food memories.  It was magnificent.

This was an evening that was a taste sensation that awakened my palate, and a wonderful start to a fortnight of eating my way through the country.  But I found later that it was only the tip of the astounding iceberg that is Vietnam.

Next: A primer on Vietnamese food. 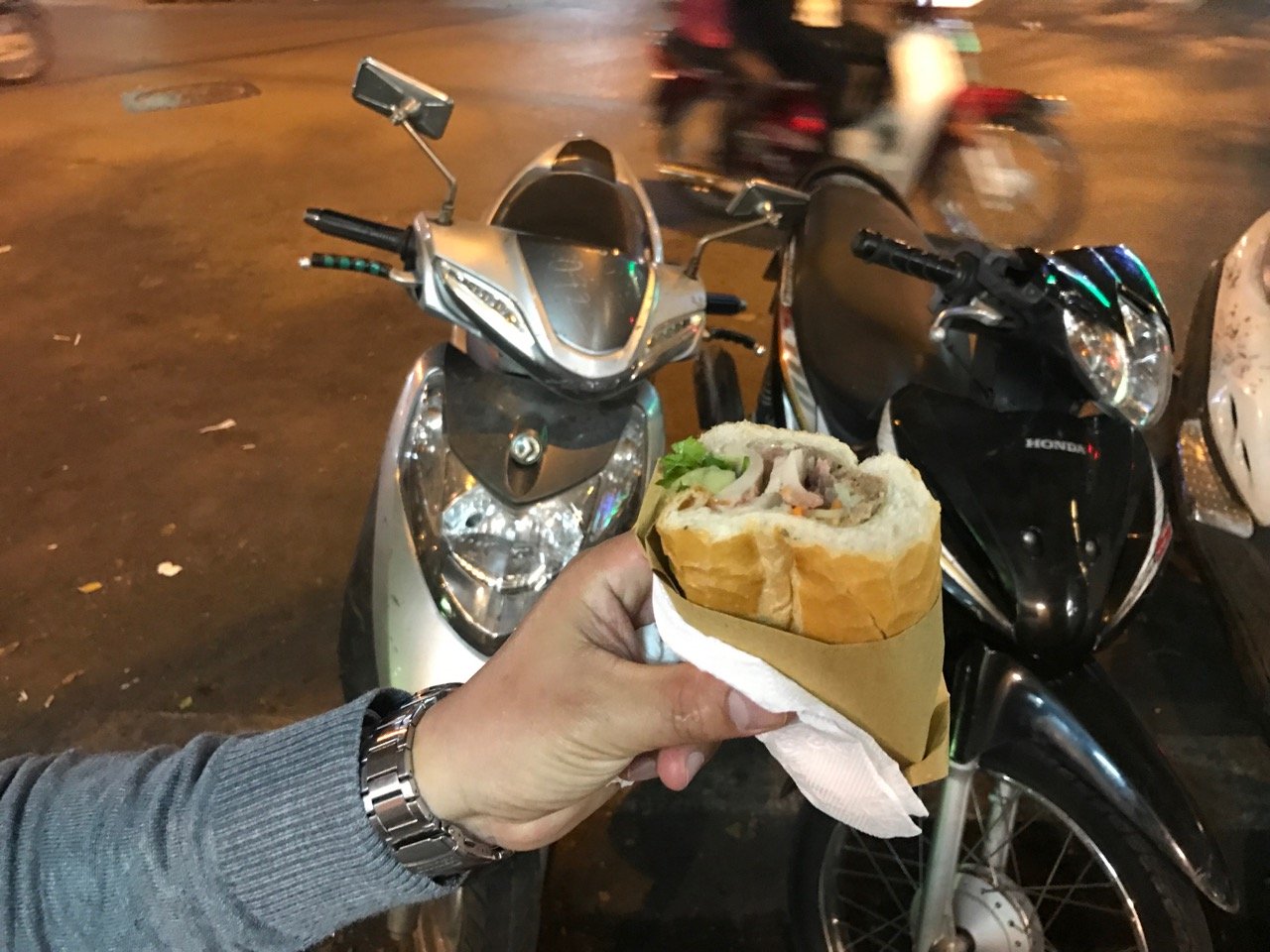 Have you been to Vietnam?

If so, what were the memorable dishes you encountered on your trip? Share your comments and insights with the community!