the heidsieck family of champagne 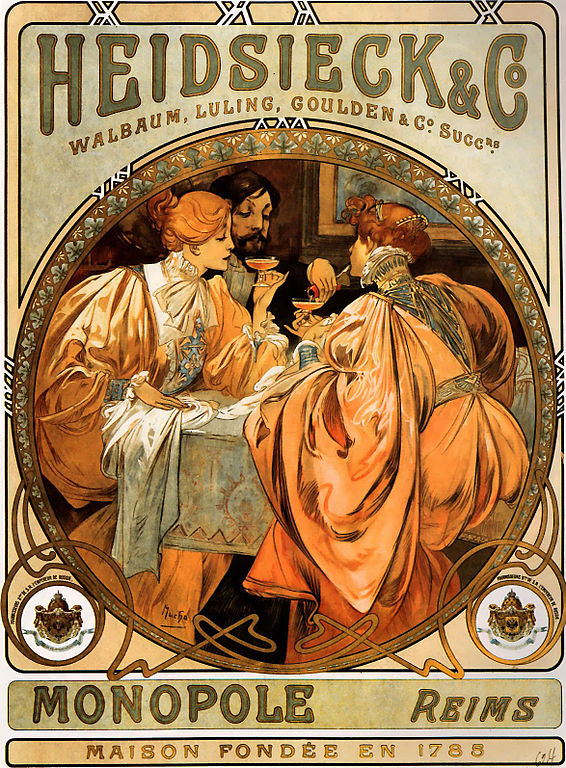 Piper-Heidsieck, Charles Heidsieck and Heidsieck Monopole are good examples of the Forgotten Champagnes. Consumers do not reach for them as an automatic reflex, and rarely are they within anyone's top three choices when shopping for bubbly. Yet they fall within the range of most people's experience, and the typical wine drinker has fond memories of at least one of them. While it's not unusual for the names to blur together as one brand in the minds of many, the three labels each have a distinctive heritage and individual style.

The family tree begins with Florens-Louis Heidsieck, who founded Heidsieck & Co. in 1785. He had three nephews, each involved in the business: Walbaum, Charles-Henri and Christian Heidsieck. After the death of Florens-Louis in 1823 and Charles-Henri in 1834, the family enterprise began to splinter. Christian started his own venture, simply called Heidsieck, in 1834; he died six months later. His widow married Monsieur Piper in 1838, and Piper-Heidsieck was born. Charles-Camille Heidsieck (popularly known as "Champagne Charlie"), son of Charles-Henri, started Charles Heidsieck in 1851. Walbaum, in the meantime, had founded his own venture in 1851, calling it Heidsieck Monopole.

Over the course of the next century, each of these brands had a good run. The leader was Charles Heidsieck, in no small measure because of the charisma and personal popularity of Champagne Charlie. Just before the Civil War, roughly 300,000 bottles of Charles Heidsieck were consumed in the U.S. each year. Ultimately, however, their sales were eroded by the advertising budgets of the major labels, and they were absorbed by larger companies. Heidsieck Monopole was purchased by G.H. Mumm in 1972, and became part of Seagram's; in 1996, they were bought by the Vranken Group, owners of several other Champagnes ventures (Charbaut, Barancourt and Charles Lafitte). Charles Heidsieck and Piper-Heidsieck ended up as part of Remy Martin, which is now Remy-Cointreau. They have both benefited from the company's deep pockets, as well as the talents of some great winemakers---first Daniel Thibault, and most recently Regis Camus.

The styles of each house are different. At Piper-Heidsieck the watchwords are freshness and elegance, exemplified by very ripe and forward fruit. Charles Heidsieck tends to produce a Champagne which is much deeper and richer, the product of intensive blending. Heidsieck Monopole falls somewhere in the middle, using a high percentage of black grapes to make a seamless Champagne which combines both freshness and depth. Pricing is fair across the board, and production is small enough in each case to ensure that the products have their own distinctive personality. 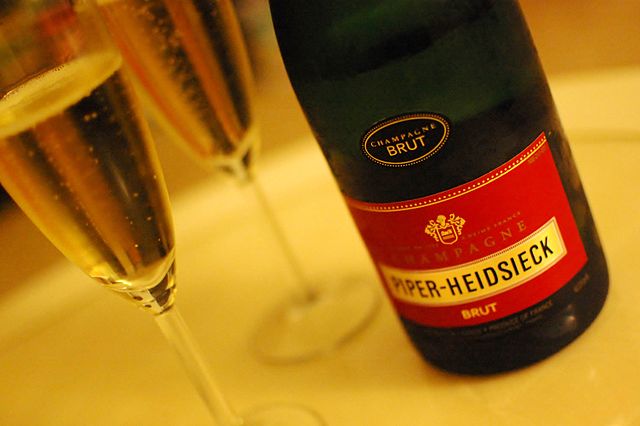 55% Pinot Noir, 30% Pinot Meunier, 15% Chardonnay. Light straw yellow; diffuse streams of midsized bubbles. The nose features forward, yeasty aromas of lemon zest, underlined with hints of vanilla. In the mouth, the wine is bright and crisp on entry; the midpalate is deep and harmonious, packed with flavors of hazlenut, citrus, melon and buttered bricohe. The finish is long and refreshing, with mouthwatering acidity amplifying the flavors. A first-rate aperitif, an excellent match with complex fish dishes, and a good value.

60% Pinot Noir, 40% Chardonnay. Deep yellow; pinpoint streams of midsized bubbles. The nose is elegant and understated, with hints of overripe melon and risen bread dough. The wine is medium to full-bodied, rich and balanced, with gentle flavors of vanilla, emlon and passion fruit; the flavors layer the palate and resonate with significant depth on the lingering finish.  A very pretty Champagne, ripe and luscious; it would make a nice match with game birds, or be quite seductive on its own.    B+

55% Pinot Noir, 30% Pinot Meunier, 15% Chardonnay. Deep, bright yellow; diffuse streams of midsized bubbles. The nose offers bracing citrus aromas, fresh and forward, accented with whiffs of vanilla, fig and red fruits. Medium-bodied in the mouth, with a rich and creamy texture; the dosage is understated, barely apparent at first. The midpalate is dense yet refreshing, with flavors of ripe melon and tree fruit. Finishes long and luscious, with hints of sweetness balanced by very good acidity. A decadent and sexy Champagne, perfect with creme brulée, puddings and fruit tarts. Not quite sublime, but pretty close.

55% Pinot Noir (20% of which is used as a still red wine), 30% Pinot Meunier, 15% Chardonnay. Deep strawberry color; pinpoint streams of tiny bubbles. The nose extends an assortment of yeasty red fruit aromas, ripe and inviting. In the mouth, the wine is medium-bodied and bone-dry, with well-defined flavors of strawberry, raspberry and cranberry framed by very good acidity. Finishes with long, succulent notes of rhubarb and cherry pie. Despite all the fruit, this is a serious wine without a great deal of hedonistic appeal; it is designed to accompany food,a dn would go very well with poultry, veal or game birds in substantial sauces.

34% Pinot Noir, 33% Pinot Meunier, 33% Chardonnay. Light straw yellow, tinged with green; pinpoint streams of very small bubbles. On the nose, an assortment of yeasty lemon, lime and grapefruit aromas leap from the glass, with hints of melon in the background. The wine is crisp and delicious on the palate, with mouthwatering acidity and all the succulent citrus flavors promised on the nose. It is medium-bodied, with a rich yet lively texture, and invites the drinker to take another sip and another glass. Finishes with long, dancing flavors of vanilla and Meyer lemon. A terrific aperitif, as well as a very good match with shellfish and river fish.

60% Pinot Noir, 40% Chardonnay. The slightest hint of red fruits on the nose, along with vanilla, honey and quince. In the mouth, the Champagne is simultaneously ripe and tart, displaying sparkling acidity, poised citrus flavors and a long, mouthwatering finish. Cries out for Dover Sole.

100% Chardonnay, aged on the lees for ten years before release. I had not tasted this cuvée for at least a decade, and remembered it to be one of the most impressive Champagnes of my life. The 1995 did not disappoint. It had a deep, bright yellow color and focussed streams of tiny bubbles. The nose exuded aromas of baked apple, lemon zest and vanilla. Like the Brut Reserve, it is rich yet refreshing on the palate, with beautifully penetrating acidity, luscious citrus flavors, and considerable depth and character. Layers of lemon, custard apple and ripe melon unfold in the midpalate, and the finish resonates for close to a full minute. Full-bodied, balanced, elegant and seductive, this is everything you would want a Champagne to be.

Bright yellow color; diffuse streams of midsized bubbles. The nose yields restrained, nutty citrus aromas, as if lemon zest had been slow-baked in the oven with sesame seeds. In the mouth, the wine reveals far more fruit than the nose promises, with rounded flavors of lemon, passion fruit and melon balanced against very good acidity. It is bone-dry and refreshing on the palate, a hard Champagne to leave alone. Finishes with succulent melon notes and hints of pear. 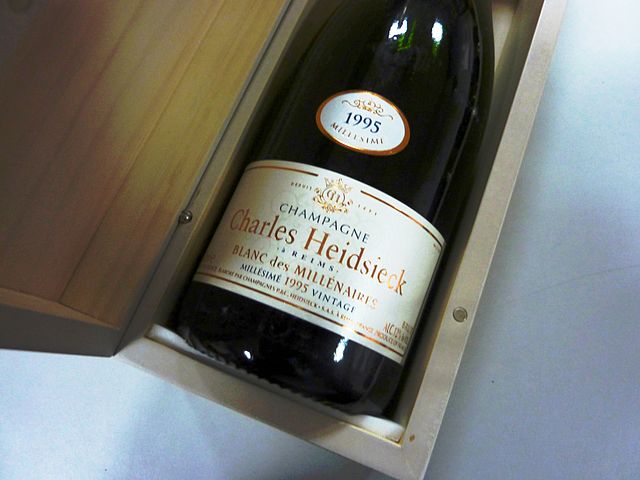