are you being ripped off by high restaurant wine prices? 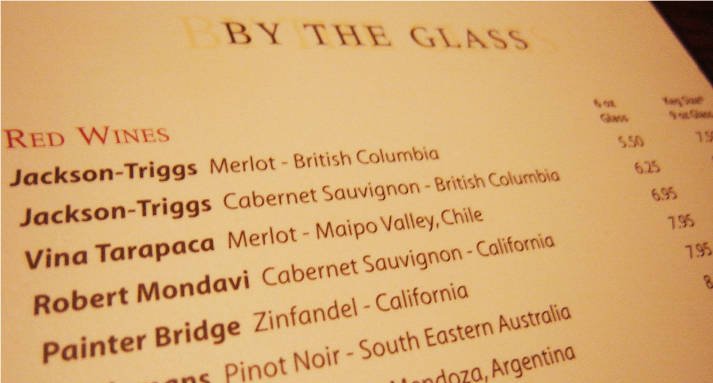 Commodities tend to go up and down in price, thus creating confusion about what they’re “worth.” Gold, for example, is supposed to be a safe haven with great intrinsic value. If so, how do we explain the fact that it sold for over $1800 per ounce in 2011 and $1200 two years later?

The truth is probably that commodities are worth what people are willing to pay for them. This seems unfair in the case of wine, since there are fixed costs tied to its production. Some wines cost $50 or $75 to make and sell for thousands of dollars. There are also wines that cost $15 to produce that consumers won’t pay $10 for, or even purchase at all.

In the restaurant universe, few subjects are more contentious than wine pricing. Diners have been complaining for a long time that they are being ripped off by prices on restaurant wine lists. Without taking sides, we’ll try to examine as many facets of this issue as we can. 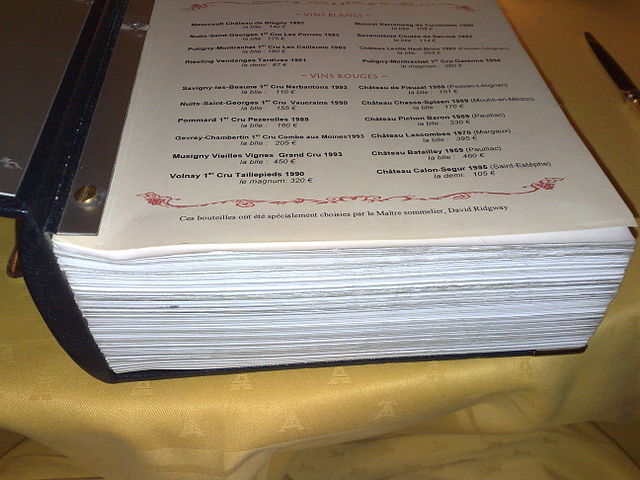 First, full disclosure: I worked in the restaurant industry for many years, and spent time as a sommelier. I believe, as most reasonable people do, that restaurants are entitled to make a profit on everything they sell. The burning question is, how much are they entitled to?

Restaurant wine pricing is often tied to how popular the place is, or how fancy it’s perceived to be---to put it bluntly, how much they can get away with. For a long time, leading restaurants in major markets routinely marked up wine between 300-400% over wholesale. Customers complained bitterly, to no avail, and usually ended up scaling back their expectations or avoided ordering wine entirely.

Things have changed greatly in the past ten or fifteen years. Part of that change is the influence of the Internet, but most of it is collateral damage from beverage superstores and discount outlets. Fifteen years ago, a wine with a wholesale price tag of $20 routinely sold for $29.99 on the retail shelf, and was offered in restaurants for $60-80. If you shop around for that wine today, you can buy it for $24.99, and restaurants will have a hard time getting more than $55-60 for it. This is even true in markets such as Palm Beach, where 400% wine markups used to be common.

There are people who believe that today’s prices are still too high, even though they will willingly pay $27 for a breast of chicken that the restaurant purchased for $3. Their reasoning is that the chicken breast is transformed by the artistry of the chef, whereas a bottle of wine is merely opened and plunked down on the table. Let’s look at that argument in some detail. 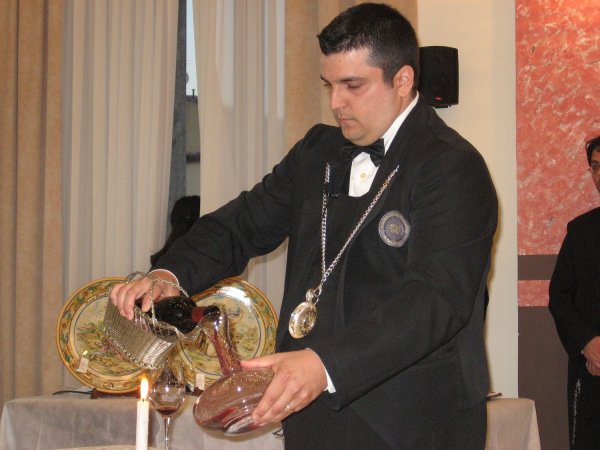 the rationale behind high wine prices in restaurants

Understand this: you cannot sit in a $5 or $10 million facility and drink wine for double the wholesale price. If a restaurant allows you to do that, it won’t be in business very long. On top of the built-in costs of construction, rent and utilities, you have associated expenses such as décor, linens and tons of staff.

At this point I hear you saying: why should I pay for things like linen, oil paintings and elaborate service? Because you’re the customer. Unless you believe the restaurant is a philanthropic enterprise, who else do you expect to pay for it? And if the place is too fancy for you, go to a gastropub or fast-casual restaurant. It’s a free country.

What about the chicken breast theory? Yes, chefs are highly trained professionals who spend a long time learning their trade; once that training is complete, if they’re creative enough and lucky enough, they succeed in their profession. The same is true for sommeliers. They go through years of study and rigorous exams, some of which are intense enough to make them want to pull their hair out. If they survive and achieve a level of credentials, they get a job running a wine program, and can then write a wine list and offer recommendations to guests.

You may not agree with those recommendations, but you’re misinformed if you question the qualifications of the person making them. And if you think it’s easy to offer proper wine service in a dining room filled with several hundred people, you’re even more deluded. Once again, who’s paying for that service? You are, in the form of higher wine prices. If a restaurant is paying a sommelier $50,000 annually, they need to sell an additional $150K worth of wine to justify that cost. That’s a hefty sum, and even more so when subtracted it from yearly wine revenue. Part of the shortfall is usually made up by raising prices.

In the face of all this, there’s a growing legion of diners who insist on the right to bring their own wine to restaurants. Usually they are charged a fee for doing so, which is called corkage. This is currently one of the most hotly debated topics in the restaurant world.

There’s little doubt that the trend toward diners bringing bottles into restaurants sprang from widespread inflation in wine prices. To be fair, there are collectors who possess and regularly drink rare and expensive wines, wines that restaurants don’t have on their list. They want the luxury of drinking the same wine in the restaurant that they consume at home.

To offset the costs of labor, glassware and lost revenue, many restaurants have resorted to the solution of the corkage fee. In high-end places, $25 per bottle is standard, and steeper fees aren’t uncommon. The general idea is to discourage someone from stopping at the supermarket on their way to the restaurant, grabbing a bottle of chilled Kendall-Jackson Chardonnay (or worse), and drinking it with dinner. In some places, corkage fees are waived if the diner orders a bottle off the list.

There are establishments that don’t allow outside wine at all, and others who have attempted to make it financially prohibitive. Famed chef Thomas Keller created a stir in 2014 when he raised the corkage fee at The French Laundry and Per Se to $150 per bottle. The move was obviously intended to discourage people from raiding their cellar, and makes some sense in context. Both restaurants hold three Michelin stars, and have world-class wine lists that represent an investment of millions of dollars. You’d think most people would be able to find something to drink in those circumstances.

There are two basic arguments against allowing customers to bring their own wine, and the first is economic. Restaurants have two things to sell, food and alcohol. Take one of those out of the mix, and survival becomes difficult. The other argument is aesthetic. If you believe that the suggestions of a trained sommelier have any merit, and if you accept that the wine list has been carefully written to complement the menu, you run the risk of creating a serious mismatch by bringing your own bottle.

What do I mean by a mismatch? I was once in charge of the wine program at a cutting-edge New American restaurant, and had devoted hundreds of hours in tasting and choosing the wines. Someone called up and asked if he could bring in a bottle of 1961 Mouton-Rothschild, and of course I said yes. As I watched this man eat a spicy quesadilla appetizer and sip his ’61 Mouton, I questioned the point of life on planet earth. You may be wealthy enough to have an impressive wine collection, but if your cellar consists of thousands of bottles of only Bordeaux, California Cabernet or anything else, maybe---just maybe---it might be time to broaden your horizons. A wine professional can help you do that, if you’re willing.

One of the ironies of this debate is that customers rarely complain about the price of alcohol other than wine. Assume you’re a Jack Daniels drinker, which usually means you won’t drink anything else. The current wholesale cost of a bottle of Jack Daniels is around $28, or $1.12 per ounce. If you order it on the rocks in a fancy restaurant, you’re likely to receive 1.5 ounces for $12-15. No one seems to mind paying $15 for $1.73 worth of whiskey, or at least they’re not verbal about it. Apply the same markups to wine, and you would hear customers shrieking 1,000 miles away.

Given my background, I don’t bring wine to restaurants out of respect for the efforts of everyone involved. I’ll plead guilty to having accompanied collectors in situations where they did so, when my desire to experience the wine overcame my empathy for the restaurant. Generally, though, if you want to consume your favorite tipple any else other than in your own home, you’ll have to pay a premium for it. 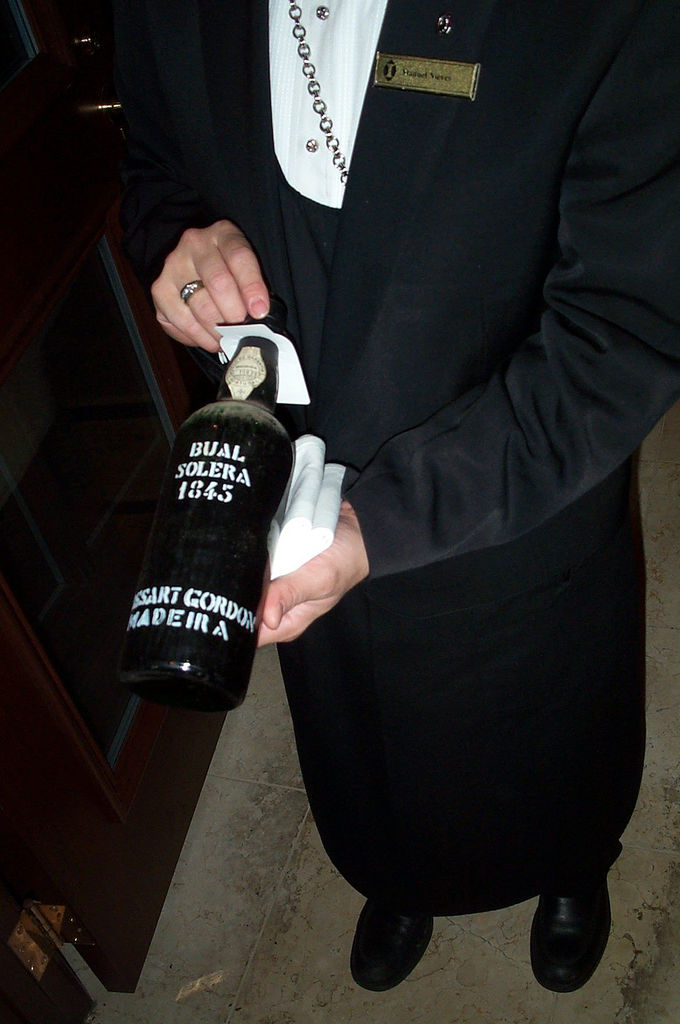