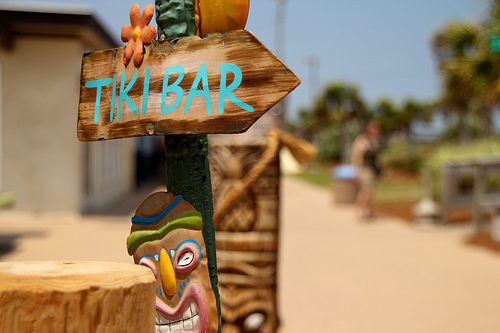 Few experiences are more emblematic of the Florida Keys than a visit to the famed Tiki Bar at Islamorada’s Postcard Inn Beach Resort (formerly known as Holiday Isle). Once you get south of Key Largo, it’s clear that you’ve entered a strange and beautiful territory, a place where individual freedom is prized above all---a place the late Norman Mailer might have referred to as the Wild West of the Southeast.

Residents of the Florida Keys are frequently described by outsiders as having a high tolerance for the behavior of others, but “tolerance” isn’t an accurate description. For the most part, these folks simply don’t care what you do, as long as it doesn’t infringe on them. The Keys have undergone dramatic changes over the past few decades, along with the rest of the region, but this belief system still holds strong.

The Tiki Bar opened in 1969 as part of the Holiday Isle Resort complex. It was (and is) the quintessential dive bar, the penultimate shack on the beach for the unshaven. The current management of the Postcard Inn describes the hotel accommodations as “boathouse chic,” which in plain English means it ain’t the Four Seasons. The Holiday Isle Tiki Bar has been recently remodeled, but it may still be described---generously---as rustic. If you get hungry during your visit, don’t expect anything elaborate to emerge from the kitchen. Some raw shellfish, smoked fish dip or grilled local catch is probably as good as it will get.

The Holiday Isle Tiki Bar's claim to fame is the invention of the Rum Runner in 1972. According to legend, the hotel owner ordered his bar manager to create a cocktail that would use up a surplus of booze in inventory. The barman blended Meyers rum, blackberry brandy and banana liqueur, dumped it into a blender with some ice, and topped the frozen concoction with a float of 151 proof rum, and a new generation of beach bums was born.

If you’re visiting the Florida Keys, be advised that the resort is the scene of a massive and monstrous after-season party attended by many South Florida restaurant workers. This event usually takes place after Mother’s Day, and makes Spring Break look like high tea. Only the fittest survive.

If you haven’t sipped a Rum Runner, it could fairly be said that you haven’t visited Florida. I fell in love with this cocktail after moving to Florida in the 1980s. Rum snobs may look down on it because of its sweetness, but that is precisely what makes it pair so well with spicy island cuisine.

Here is the recipe that appeared in my first book, Iconic Spirits: An Intoxicating History:

Combine all ingredients except 151 rum in a blender and mix until smooth. Pour into a hurricane glass, garnish with the orange slice, and float the 151 rum on top.

And here are what purport to be the original recipes (frozen and unfrozen), as reported by a reliable media source:

Fill hurricane glass with ice. Add all ingredients but 151; stir. Garnish with an orange slice and float 151 on top.

In a blender, add all ingredients and blend until smooth. Pour into a hurricane glass and garnish with an orange slice. Add a shot of Bacardi 151 as a floater for the truly adventurous. 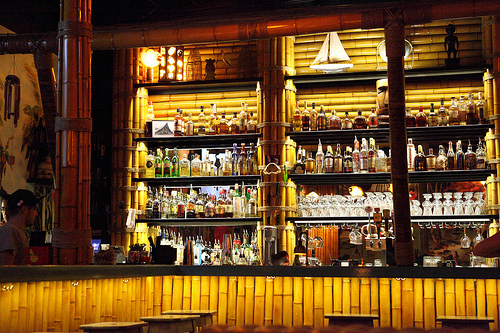