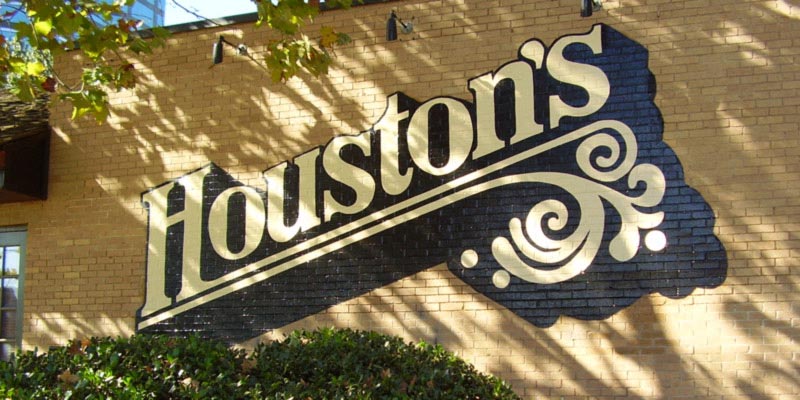 The Houston’s restaurants make their own ketchup!  They also make all soups and stocks from scratch, they grind the meat for their burgers in house daily, the French fries are made from fresh potatoes, fish is filleted in house and there is no meat locker or any large freezer on the premises.

I mention these things because they are not what you would normally associate with a chain restaurant.  I’m not sure I would associate most of them with privately owned restaurants either.  In truth, it’s not accurate to call Houston’s a chain.  Although all they all have certain basic menu items and guiding principles in common the restaurants are not cookie cutter copies of each other.  Each tries to recognize the community it’s in and add features that are appropriate to its location.  A Houston’s in San Francisco has a piano daily and a three piece band on weekends.  The restaurants around Miami serve Cuban coffee.  None of them advertise.  They are trying to attract locals by word of mouth and are not interested in becoming a tourist destination.

Houston’s is owned by the Hillstone Restaurant Group.  There are 34 Houston’s located in 12 states.  Additionally, Hillstone has several restaurants that are Houston’s in disguise with different names.  They include the Rutherford Grill in Napa, the Palm Beach Grill, the Los Altos Grill and the Café R&D in Newport Beach.  These restaurants can be quite different than most Houston’s but all share the concepts of fresh, made-from-scratch food and, most important, a good wine list.  The Hillstone Group is privately owned which gives them the autonomy to do what they want, and what they want is to keep everything high quality and well-priced.  In fact, many of the recipes in the restaurants come from the principle owner’s mother, who must have been one hell of a cook.

A visit to the Houston’s in Boca Raton revealed an attractive room featuring hardwoods, leather and low lights.  There is a good sized bar which is handy while you’re waiting for a table, and you probably will wait for one because they don’t take reservations.  The kitchen is open and in full view.  They want you to see them making the stocks, keeping the dishes clean and so forth.  You can get anything from a burger or a salad to a full meal.  They describe the menu as casual but sophisticated fare.  I would call it upscale comfort food.  Dishes that come highly recommended from friends and personal experience include the Chicago-Style Spinach Dip ($10), Tortilla Soup ($6, available only on Tuesdays), French Dip Sandwich ($16), the House-Made Veggie Burger ($12) that gets raves from meat eaters, Barbecue Pork Ribs ($25) which are among the best I’ve ever had, and the steaks.  Service is quite professional and many of the servers are long term employees.  The goal here seems to be to do just a few things, but do them very well. 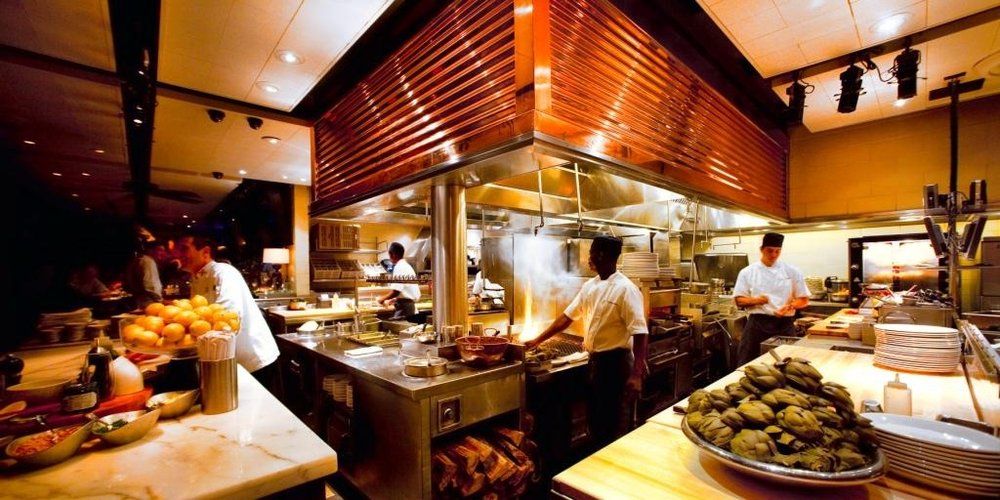 the wine program at houston's

That goal carries over to the wine list.  It’s a relatively small but well thought out selection.  There are 31 bottles with 14 available by the glass.  Bottle prices range from the low to mid $20s to the $40s, with a few above that.  The most expensive bottle is an Elyse Tietjen Vineyard Cabernet at $70.  I spoke to Barry Cothran who is in charge of wine buying for the Hillstone Group.  He is based in the Napa Valley and appears to be well connected to the wine community there.  This is reflected in a large percent of Napa wines on the list.  He wants to bring his customers the opportunity to enjoy quality driven, well-crafted wines, and that includes offering them at a fair price.  The wines I checked all appeared to be priced at about two times retail (an exceptional value in today's restaurant market), and less than that in some cases.

Barry does not want to completely control the wine lists in the restaurants.  The onsite managers are expected to get involved, and in fact to get excited about the wine program.  They pick wines and then consult with Barry.  He is sometimes able to source wines through his contacts in the Valley that are otherwise not generally available.  He looks for smaller, emerging wineries, but ones that are big enough to meet his supply needs; if a wine gets popular in a given restaurant, they can go through 10 cases of it in a week.  The list is changed at least every three months, and sometimes more, often to reflect new discoveries and deals that can be passed on to the customers.  Wine lists are sensitive to the community that the restaurant is in.  For example, there is a reserve wine list in the Coral Gables restaurant that emphasizes Latin wines.  The approach to wine is constantly evolving and constantly assessed.  They are serious about it.

The wine list in the Boca restaurant reflects this philosophy.  There are some names on the list that are familiar, including Jordan Chardonnay ($37), St. Supery Cabernet ($27), Robert Sinskey Los Carneros Napa Valley Merlot ($37), Gloria Ferrer Estesian Carneros Pinot Noir ($29) and David Bruce Petite Syrah, Central Coast ($27).  Some others are not so familiar (at least not to me), and probably reflect Barry’s knowledge of the Napa winemakers.

Every attempt is made to demystify wine and make drinking it a comfortable experience.  Wine is not treated as the drink of the gods.  The usual dance surrounding a wine order in a restaurant is dispensed with.  Unless otherwise requested, bottles are opened at the bar and brought to the table.  You are asked if you want to taste the wine or if it should just be poured.  (Hopefully someone has ensured that the wine is not corked before it is brought to you.)  Servers are trained in the wines on the list and have tasting notes, background information and talking points about each one.  As noted at the bottom of the menu, they will be happy to call a cab for you if you don’t have a designated driver.  Houston’s also has the ultimate wine-friendly policy.  Realizing that their list does not suit everybody, you are welcome to bring in your own bottle with no corkage fee. 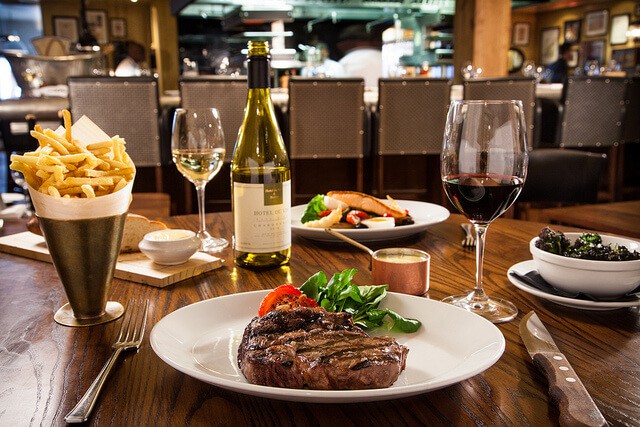 A visit to the Palm Beach Grill shows how the Hillstone concept can translate into a very different restaurant.  The Grill is definitely a Palm Beach restaurant but doesn’t have the stuffiness and outrageous prices of many of places there.  The menu is a bit more limited than Houston’s.  Some of the Houston’s dishes appear on it, such as an ahi tuna salad with greens, avocado and mango, the cheeseburger, the French dip sandwich, the prime rib, the barbecue ribs, and the filet mignon, all a few dollars more than in Boca.  These are supplemented with specialties such as excellent fish dishes, crab cakes, and a kosher hot dog that is famous around town.  (Naturally, they bake the roll for the hot dog on premises.)

I tried house smoked salmon with chef’s dressing and toasts ($16) as an appetizer.  This turned out to be not nova style salmon but a nice piece of fish, lightly smoked and very tasty.  For dinner I had a grilled red snapper with rock shrimp Zydeco sauce and my wife had a sautéed lemon sole special.  Both were priced in the low $30s, not bad for Palm Beach.  Both were beautifully done.  We did not have dessert but I saw the hot fudge sundae which could be shared by a small village.  Service was smooth and friendly without being overbearing.  They take reservations.  This could easily become a favorite Palm Beach restaurant.

The wine list at the Palm Beach Grill began years ago with 30 wines and has grown to about 85 today.  There are less than five wines in common with the Boca restaurant.  The Palm Beach list reflects a clear perception by Hillstone of a more upscale and sophisticated wine drinker.  There are far more familiar names on this list such as Chalk Hill, Cakebread Cellars, MacRostie, Caymus, Chappellet, Robert Pecota, Flowers and Saintsbury among other high quality producers.  There are also a lot of less familiar names, many from Napa.  I detect the fine hand of Barry Cothran here.  Bottle prices begin in the mid $20’s with a good selection in the $30s and $40s.  Since this is Palm Beach, however, they procede upward, topping out at $194 for Joseph Phelps Insignia, $195 for Heitz Martha’s Vineyard Cabernet, and $225 for Veuve Clicquot, La Grande Dame.  As a whole, the list is very nicely selected, appropriate to its clientele, and priced fairly, particularly considering its location.

Neither Houston’s nor the Palm Beach Grill is inexpensive.  The average check in Houston’s is close to $50 per person, and the Grill could go well over that depending on what you drink.  But both are high quality establishments that excel at what they do and are worth it.  I suspect that if you go to either of them you’ll go back.  I will. 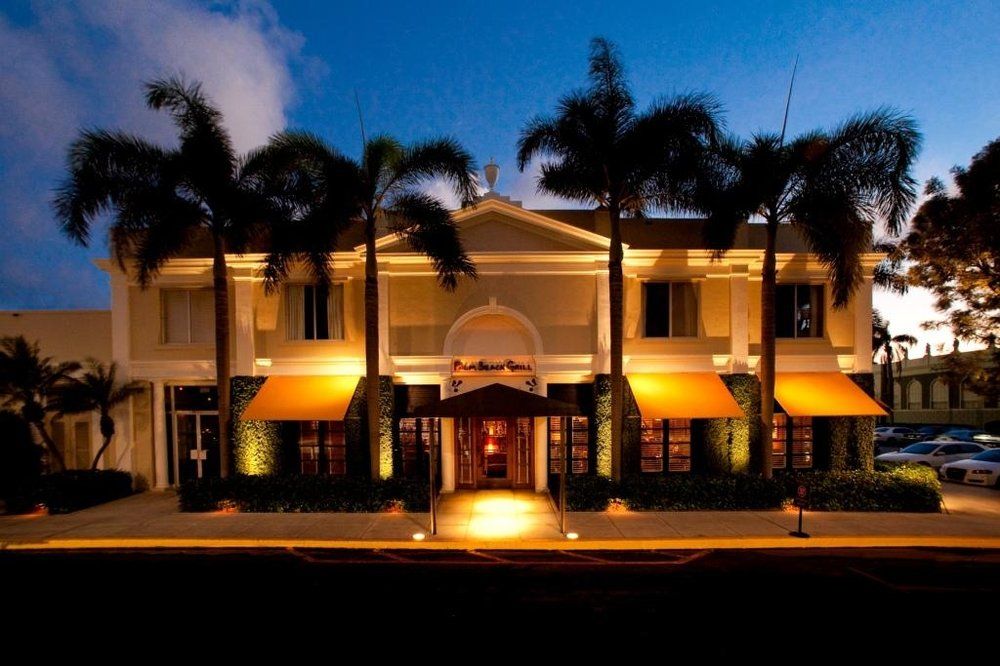 Give us your comments!

Do you like Houston's? Is it a place you frequent---if so, do you agree with this review? Share your thoughts with the community!