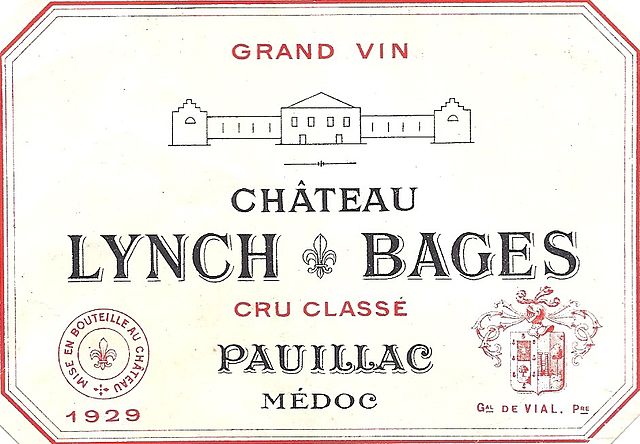 Chateau Lynch-Bages is located in the rural town of Bages, near the city of Pauillac. The 220 acres of vines are situated on a gravel outcrop overlooking the Gironde river. While the property's reputation has had its ups and downs over the past few centuries, it is recognized today as one of the world's great wine estates.

As far as we can tell, the Domaine de Batges, as it was then called, was originally part of Lafite. It was purchased in 1728 by Pierre Drouillard, whose sister married Thomas Lynch in 1740. The Lynch family hailed from Galway, and had been "chased out" (according to the Lynch-Bages website) in 1691. Thomas Lynch's sons were at the epicenter of the political intrigues of the day: Michel was mayor of Pauillac during the Revolution, and Jean-Baptiste became a member of the Chamber of Deputies.

The family sold the property in 1824, and Lynch-Bages, as it was now known, began a period of decline which lasted more than a century. It was ranked a Fifth Growth in 1855, near the bottom of the Classification of Red Wines of the Gironde. By the time the second edition of Cocks & Feret appeared in 1883, the estate was considered inconsequential, and was barely mentioned. The quality of the wine hardly became better as a result of the two World Wars and the Great Depression.

In 1934, the desperate owners of Lynch-Bages reached an agreement with Jean-Charles Cazes. The Cazes family had emigrated to Bordeaux in the 19th century, from a small town in the Pyrenées. Jean-Charles apprenticed as a baker, served in World War I, and was working at a local bank when the owners approached him. Initially, he signed on as a tenant farmer. He would not be charged rent, and would receive a share of the profits if any were to materialize. It was the perfect arrangement, since he had a day job and was not dependent on wine to make a living.

He took over an estate in disarray. Only half of the acreage was planted, and some of the best parcels were being used to grow potatoes. Jean-Charles was lucky from the beginning. 1934 was a good vintage in Bordeaux, and he was able to sell his entire crop to the Cruse firm. By 1938, he was able to buy the property. He embarked on an ambitious program of replanting. Jean-Charles was succeeded by his son André, who in turn passed the torch to his son, Jean-Michel. Jean-Michel has rebuilt the winemaking facility and barrel cellar, and today Lynch-Bages is regarded as an overachiever---a Fifth Growth which produces wine the quality of a Second Growth, perhaps even a "super-Second".

The vineyard at Lynch-Bages is planted in the proportion of 73% Cabernet Sauvignon, 15% Merlot, 10% Cabernet Franc and 2% Petit Verdot. The wine is typically aged for fifteen months in 60%  new oak barrels, fined with egg white and filtered if necessary. The result is a full-bodied, powerful style of wine which is quintessential Pauillac. As to the style, it is sometimes referred to as the "poor man's Mouton," although prices have escalated to the point where it can hardly be considered recreational drinking for the impoverished.

Most of the following notes were taken at a vertical tasting held in Jacksonville. I was not in attendance (sadly, as Clive Coates might have observed, no one thought to invite me), but the notes were forwarded by Tom Johnson, one of the more enlightened palates in Northern Florida. Many of the bottles came from private cellars in Paris, and were in impeccable condition. I have added notes on the 1989 and 1990 vintages. 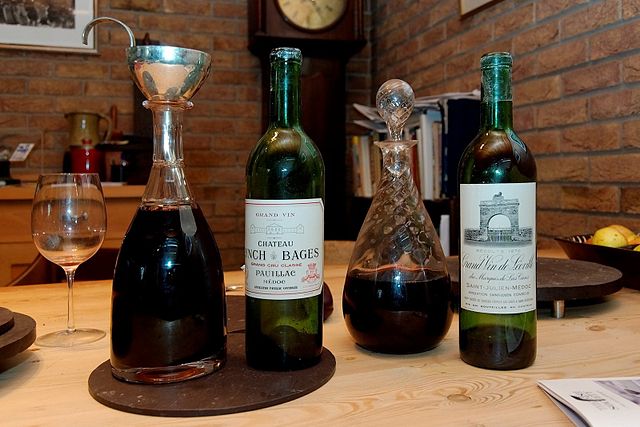 Very dark, deep red color. Lots of toasty wood on the attack, along with aromas of sawdust, roast espresso, boysenberry and forest floor. On entry, the wine is thick, viscous and extremely atypical for Bordeaux; one taster noted a caramel/brown sugar component, which was similar to the 1959. Loads of fruit fill the mouth, yet the wine has good minerality and enough acidity to balance it all out. While some felt the wine was overripe and out of proportion, the finish seemed to emphasize the characteristics of classic Claret.  (T.J.)

Dark, deep ruby color, with good viscosity in the glass. The nose hits me with aromas of cherries, wood, earthiness, and a scent of fruit-flavored vitamins that resembled chewy pebbles. The palate is substantial, with forward nuances of red and black fruits, a solid mineral underpinning, and a balance of body and elegance. Finishes with good acidity and serious (but tolerable) levels of tannin, suggesting that more time in the cellar will pay off.   (T.J.)

Deep, bright purple-ruby color. The nose is fragrant, perfumed with blackberry, cedar, minerals and anise, and underlined by aromas of damp earth. In the mouth, the wine is medium to full-bodied, angular and structured; the midpalate offers flavors of dark berries and dried plums, accented by hints of violet and rose petal. While the acidity is good, and the tannins are still fairly stiff, the fruit seems to have dried out over recent years. This is classic Claret---very good, to be sure, but not nearly as ripe and pleasurable as it promised to be when released.   (M.S.)

Deep, saturated purple color which pushes out directly to the rim, showing no sign of age. The nose is fragrant and complex, offering scents of cedar, spice box, anise, menthol and graphite, intermingled with ripe blackberry fruit. In the mouth, the wine is powerful and full-bodied, yet approaching maturity, with the oak and tannin seamlessly integrated into the structure. The midpalate offers gobs of ripe blackberry, plum and licorice, underlined by a profound minerality. The finish is long, cool and spicy. This is why people drink Bordeaux.   (M.S.)

A solid, dark ruby color fills the glass, with good glycerin content. Quietly, it exudes cherries and a wild berry character, along with hints of cedar, spice, dark cocoa and mineral complexity. The wine has a very nice entry of fruit and minerals, with slight mushroom overtones; the palate is balanced, not heavy or rich, yet with good muscle and power. I like this, although some tasters in the group felt it was only average.  (T.J.)

This wine was slightly controversial to the group. A few thought it was corked (I somewhat agree; when swirling it, it yielded subtle, chlorine-like aromas); others thought it was simply tired and worn out. Minty and a little dirty, there is little fruit left in the wine. Perhaps a better description is "lifeless."   (T.J.)

Lighter ruby color, with some brick around the rim; good glycerin content. A hint of meatiness and spiciness on the nose combines with hints of cedar, dried fruit and tea leaves, with a brown sugar/caramel character. The wine contineud to show more complexity and taste on the palate, opening up with layers of flavor and added dimensions; forward flavors of plums, cherries and cedary blackberries fill the midpalate and continue on the finish. A caressing and beautifully proportioned wine!    (T.J.)

Very solid ruby-garnet color, with some clearing around the rim. On the nose, aromas of dried red fruits mix with cedar, graphite and dried spring flowers. It displays the same flavor profile on the palate, with good acidity supporting the fruit; while there is still tannin present, most of it is resolved, and the acidity gives the wine a mouthwatering character far along in its life. The subtle dried fruit flavors linger on the finish.    (T.J.) 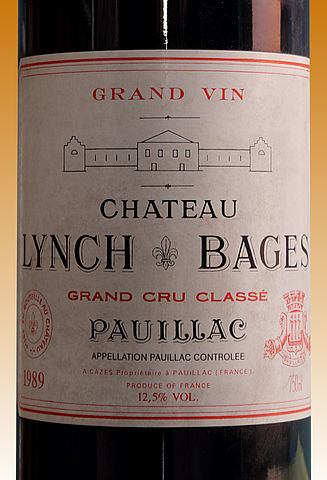