Yearning for a slice of old Sonoma? Pay a visit to Martinelli winery. You’ll be rewarded with a venerable family saga, old vines, choice vineyard sites, a tasting room located in a historic hop barn, and a collection of remarkably graceful wines.

The story began in the 1880s when Giuseppe Martinelli and Luisa Vellutini eloped from their Tuscan village, came to California, and began growing grapes in Sonoma County. They made their first wine in 1887. From there, management of the winery passed first to Giuseppe’s son Leno, then to his son Lee Sr., and today resides in the hands of his four children. Amazingly enough for a family business, they all seem to get along and share the same vision for the future.

A visit to Martinelli winery is a reassuring experience in an era when Sonoma seems to be inexorably morphing into Napa. All over California, beverage conglomerates seem to be gobbling up small family wineries like popcorn at the movies. Venture capitalists and retired tech giants from Silicon Valley are pouring tens of millions into the hunt for the next Screaming Eagle. In the midst of all that, you can come to Martinelli and find a winemaker in overalls.

The Martinellis today remain primarily grape growers, and use about 10% of their crop to make wine under their own label. Most wine drinkers probably regard them as a Zinfandel producer, which sets up the expectation that the wines will be large-scaled, full-bodied, and powerful. Instead they are light and lyrical, enhanced by bracing acidity and reflective of the sites where they are grown. 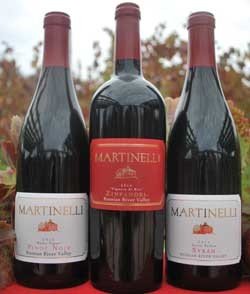 The Sauvignon Blanc grapes are currently sold to other producers, but the winery does turn out several Chardonnays. Best among them is the 2012 Charles Ranch ($55), located on the northern Sonoma Coast. A tight, fine-grained nose is followed by crisp flavors of citrus, melon and pear, with the acidity creating a rich but refreshing mouth feel.

Among the Pinot Noirs, the standout is the 2012 Bella Vigna ($45), a blend of vineyards from the Sonoma Coast. Despite a very light ruby color, the wine is medium-bodied and complex: enticing flavors of red berries, rhubarb and baking spices coat the palate and reverberate on a long finish. Also worthy of mention is the 2012 Moonshine Ranch ($70), which displays concentrated flavors of red raspberries and a spicy texture.

Martinelli winery's flagship bottling is the Jackass Hill Zinfandel, planted in 1899. This impossibly steep vineyard site, located on a 60 degree incline, acquired its family nickname because only a jackass would farm it. Aromas of cola and prickly briar perfume the nose. The 2013 ($100) enters the mouth cleanly, exhibiting a peppery texture and a reduction of stewed black fruits in the mid palate leading to a long, spicy finish. It’s a natural match for grilled meats, strews, roasts and strong cheeses, and a charm on a cool night.

This article originally appeared, in a slightly altered form, on palmbeachillustrated.com