Depending on your point of view and where you come to rest on the economic scale, Palm Beach is either an enchanting place or a hallucination. Either way, most estimates are that 20% of America’s wealth resides there during the winter season, and the restaurants are tailored to that crowd. The following mini-reviews reflect my personal favorites based on several decades of experience. Note that only restaurants on the barrier island of Palm Beach are included (West Palm is a different market). If a place isn’t mentioned, it’s not recommended. 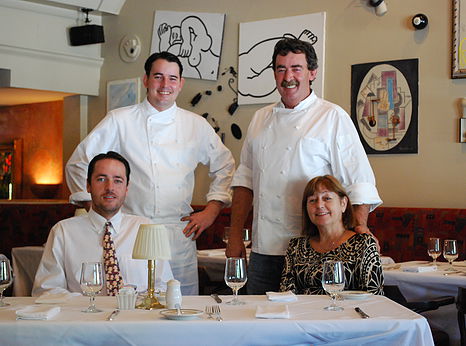 Consistency is the most prized commodity in the restaurant world, and Chez Jean-Pierre is remarkably consistent. Order the Dover Sole tonight, and it will be identical when you return six years from now. The level of ever-present quality stems from the fact that this is the quintessential family restaurant. The name on the door is Jean-Pierre Leverrier, who emigrated to Florida from Normandy and opened his restaurant in 1991. His son Guillaume assists him in the kitchen, and Guillaume’s brother David runs the front of the house with his mother. Where else will you find a homemade foie gras terrine, lobster fricassee with Sauternes and lime, or an authentic boudin blanc with Calvados sauce? (132 North County Rd., (561) 833-1171; chezjean-pierre.com).

Clay Conley is the local version of a celebrity chef: impossibly handsome, richly talented, and (unlike his counterparts) very hard-working. His menu is dominated by small plates in various categories (Cold, Green, Crispy, Wood-Fired, Flour and Water, etc.) and changes seasonally. Prior to opening Buccan, Conley had already made his bones at Azul, the luxury restaurant at Miami’s Mandarin Oriental. Buccan has a lively bar scene, and the restaurant is complemented by the adjoining Sandwich Shop, sushi bar (Imoto), and a family-style Italian restaurant over the bridge in West Palm called Grato (350 South County Rd., (561) 833-3450; buccanpalmbeach.com).

No one in Palm Beach is doing a better job than Café Boulud. The level of food and service is such that you might believe you were in the middle of Manhattan (ground zero for Chef Daniel Boulud) rather than stuck in an elegant outpost of the Sixth Borough. In addition to the a la carte items, there are prix fixe menus at lunch and dinner, and all dishes change with the seasons. Since this is technically a hotel restaurant, you can come here for breakfast as well. The wine list is stunning, and the sommelier is serious but friendly (301 Australian Ave., in the Brazilian Court Hotel; (561) 655-6060; cafeboulud.com/palmbeach). 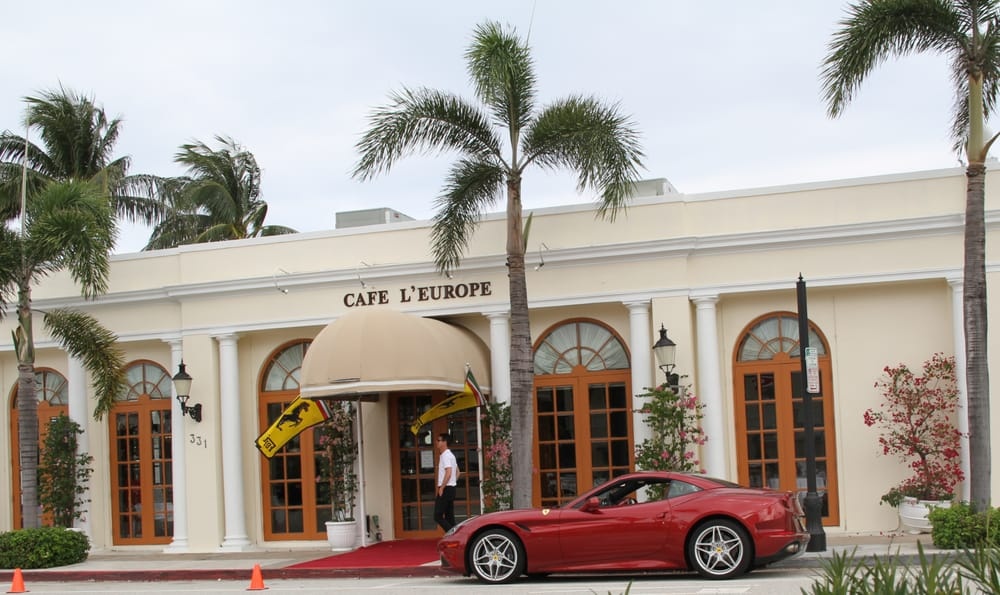 Once upon a time, bluebloods on The Island measured their social stature by their ability to get a table at Café L’Europe in the height of the season. Times have changed, but the restaurant has not. The menu still contains all the old favorites: lobster salad, sweetbreads, caviar, Dover Sole and the traditional weiner schnitzel topped with a fried egg. The wine list is an abridged version of what it used to be, but there’s still a dedicated sommelier on hand to assist you. And the interior is as impressive as ever---a riot of flowers, wood paneling, starched white tablecloths and beautiful people wearing jewelry that cost more than your house (331 South County Rd., (561) 655-4020; cafeleurope.com).

Echo serves what it calls “resounding Asian cuisine,” a mix of food from China, Japan, Vietnam, Thailand and Korea, authentically reconstructed and artfully served. The menu changes several times each year, as do the craft cocktails in the Dragonfly Lounge. They’ve recently added an outdoor garden, complete with fire pit, which serves as an oasis during happy hour or late at night. Since Echo is an off-site restaurant of The Breakers, it shares a curated part of one of the world’s great wine lists. This is a signature experience that will please the fussy and well-traveled alike (230A Sunrise Ave., (877) 724-3188; thebreakers.com/dining/echo).

HMF (short for Henry Morrison Flagler, the resort’s founder) is the flagship restaurant of The Breakers, a monument to what can be accomplished with the right amount of vision and guts. Located off the hotel lobby, the historic space that once housed the Tapestry Bar and Florentine Room was renovated (at staggering cost) by famed architect Adam Tihany. The result is an elegant, comfortable venue that would fit nicely into New York or San Francisco. The menu consists of nearly four dozen small plates in different categories. Of the 2200 wines on the hotel’s master list, roughly two-thirds are available at HMF, along with a team of sommeliers to guide you. Whether you drop in for a cappuccino or spend an evening, this is a spectacular and memorable place (One South County Rd., in The Breakers Hotel, (877) 724-3188; thebreakers.com/dining/hmf/)

The Palm Beach branch of Meat Market (other locations are Miami and San Juan) advertises “a sexy, more glamorous take on the traditional steak house,” and delivers on all points. The menu is more interesting and varied than other steak houses, and the sleek interior resembles a beef palace for magazine models. The real action is at the bar, where young professionals (anyone under 60, in Palm Beach) drink, dine and attempt to hook up (191 Bradley Place, (561) 354-9800; meatmarket.net/palm_beach/) 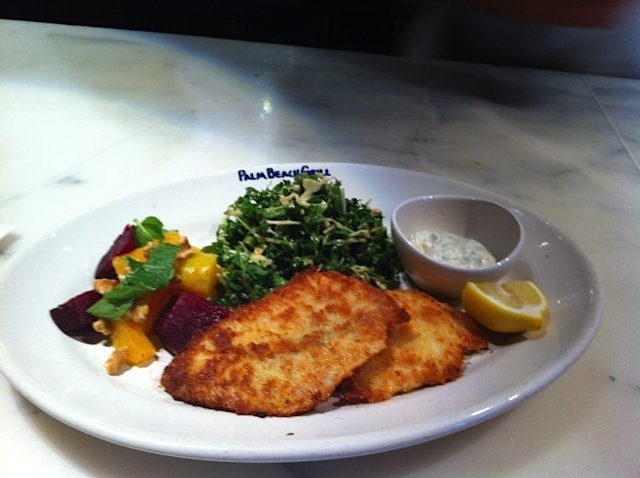 Chain restaurants have traditionally been unwelcome in Palm Beach, so first-timers may not be aware that this place is the island outpost of Houston’s. It does the same stellar job as other locations: high quality, well-prepared food; excellent service and attentive management; a thoughtfully considered wine and bar program. All of these factors result in a packed dining room, so be sure to reserve (340 Royal Poinciana Way, (561) 835-1077; palmbeachgrill.com).

Owned by a team that operates highly successful restaurants in West Palm (Pistache and The Regional), PB Catch is an attractive and innovative seafood-themed eatery. In addition to the usual range of raw oysters and fresh fish, their signature item is Seacuterie: an assortment of seafood smoked and presented in the manner of charcuterie (think salmon pastrami, scallop mortadella, jalapeno cured hiramasa, etc). To wash it all down, there’s a nicely chosen mix of domestic and imported wines (251 Sunrise Ave., (561) 655-5558; pbcatch.com).

If you missed your traditional spring excursion to Venice, stop into Renato’s for the next best thing. The food isn’t quite as good, of course, but you’re treated to a romantic Old World experience with courtly, gracious service. In good weather, you can dine outside in the courtyard of Via Mizner, off Worth Avenue. Talk about consistency: Renato’s has featured the same menu, wine list and staff for several decades, and no one seems to mind. It’s like your favorite Italian uncle, the one who never forgets your birthday (87 Via Mizner, (561) 655-9752; renatospalmbeach.com).

sunday brunch at the breakers 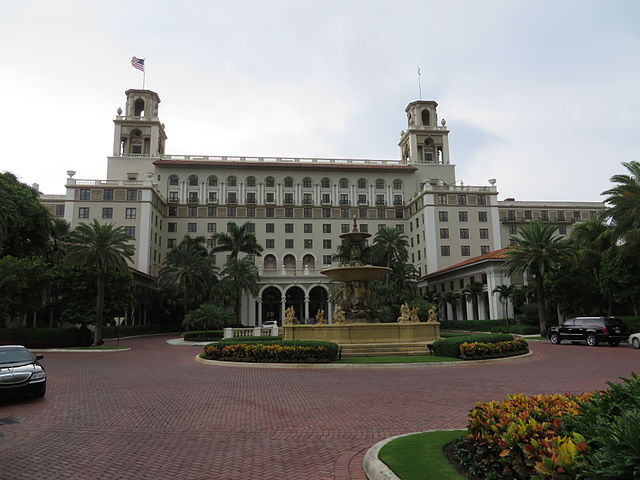 This is one of life’s grand experiences. You are seated in the Circle Dining Room and roam through endless food stations containing imported cheeses and pâtés, pastas, fresh fish, baby lamb chops and carved beef tenderloin, as well as a raw bar boasting Alaskan king crab legs, sushi, domestic caviar and more. To finish, choose one of the 30 decadent desserts, or choose all of them. Be forewarned that the experience doesn’t come cheap: after adding tax and mandatory service charge, you’re in the range of $150 per head. Is it worth it? You bet (One South County Rd., (877) 724-3188; thebreakers.com/dining/sunday-brunch/).

There are restaurants, and then there are legends. Did the German U-boat commander really anchor his ship nearby during World War II, swim ashore, and have a few drinks at the bar before disappearing back into the sea? Did Joseph Kennedy really lock himself into the ladies’ room with the Duchess of Windsor? You may not misbehave at Ta-boo, but it’s tantalizing to think someone else is probably doing so. The restaurant opened in 1941, and is the only one that fronts directly on Worth Avenue. Today the bar is just as crowded and naughty as ever, but the leafy dining areas are serene and refreshing (221 Worth Ave., (561) 835-3500; taboorestaurant.com).

The Testa family emigrated from Sicily in 1895 and eventually found their way to Palm Beach. They began operating a soda fountain in the old Garden Theater in 1921, and have been in the restaurant business ever since. Like most establishments on Royal Poinciana Way, Testa’s serves breakfast, lunch and dinner. The place looks exactly like what it is: an old-school, family operated Southern Italian restaurant, heavy on the red sauce, with a menu that never changes. It’s not trendy, but it works (221 Royal Poinciana Way, (561) 832-0992; testasrestaurants.com).

Situated in The Chesterfield Hotel, the Leopard Lounge is one of Palm Beach’s legendary institutions. The décor is dramatic: jet-black, lacquered walls, golden fittings, leather banquettes, leopard skin print carpets, and an elaborate, racy ceiling mural painted by local artist Leno Marino. The menu offers Continental fare with influences from both England and Asia, and the wine list features a number of selections from the Bouchard Finlayson estate in South Africa. All in all, it's an intriguing place to hang out (in The Chesterfield Hotel, 363 Cocoanut Row, (561) 659-5800; chesterfieldpb.com).

Send us your thoughts!

Do you have a great place to eat in Palm Beach that's not mentioned here? Share your insights with the community!