Paul Hobbs was once called “the Steve Jobs of wine.” The comparison may seem far-fetched in some areas, but it’s reasonably accurate in terms of innovation. From his early involvement with Robert Mondavi and Opus One to the founding of his own winery empire in the 1990s, he has been a leader in recognizing quality vineyards sites and using technology to get the most out of them. He was one of the first to recognize the winemaking potential in Argentina, turning out award-winning wine at Vina Cobos from 1999 onward.

With the 2000 vintage Hobbs launched CrossBarn, producing small batches of wine primarily from purchased Sonoma County fruit. The name comes from a barn he and his siblings played in as children, located on his family’s 150-acre farm in upstate New York. Greg Urmini, the energetic and talented winemaker, worked at the Paul Hobbs Winery in Sebastopol and collaborates closely with his mentor to turn out wine in the Hobbs style.

That style is a curious blend of precision and passion. The wines are clean and well-crafted, but reflect the character of their individual regions. Hobbs has a penchant for cool climates, and the resulting acidity lends a crisp, vivid quality to the fruit. Prices are fair across the board: CrossBarn was designed as a value-oriented label, and the wines are bargains for the quality in the bottle.

In addition to his wineries in Napa and Sonoma, Hobbs founded Vina Cobos in Argentina in 1998 with two partners. He also operates Paul Hobbs Selections, a carefully curated group of imports from Argentina, Chile, Canada and France for distribution in the U.S. His operation could be compared to a celebrity chef, who trains acolytes and then installs them in restaurants bearing his name, but you could fairly argue that Hobbs has done a much better job than most chefs in that regard. 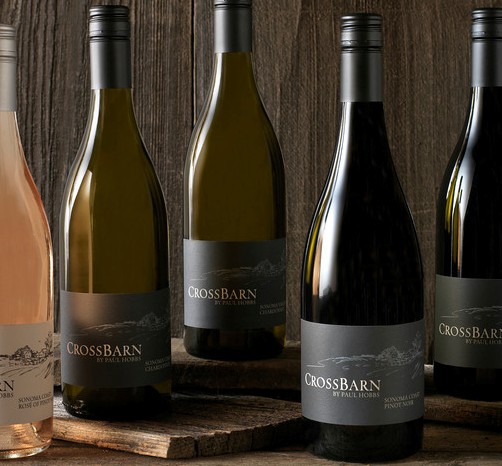 Consider the CrossBarn Paul Hobbs 2014 Sonoma County Chardonnay ($25), perfumed with enticing citrus aromas. It is clean and refreshing on the palate, with mouthwatering acidity and expansive lemon flavors. The lack of oak (90% stainless steel, 10% used barrels) accentuates the intensity of the fruit, and the finish is mineral-infused and persistent.

The two Pinot Noirs ($35) both have a great deal to offer in their own way. 2013 Sonoma Coast displays a composed, mentholated nose followed by spicy flavors of black cherry and raspberry, followed by a lingering finish. The 2013 Anderson Valley is elusive at first, but opens nicely in the mid palate with prickly, brambly red and black fruit, along with hints of violets, anise and blueberries. One taster described the mouth feel as “nervy.”

For me, the winner in the lineup is the CrossBarn Paul Hobbs 2013 Sonoma County Cabernet ($40). The rich nose serves up a mélange of aromas (mocha, cocoa, baking spices) that suggest a chocolate layer cake. It’s nicely balanced in the mouth, filled with ripe black fruits, good acidity and youthful tannins. The finish is long and dusty. Seek this one out, and you won’t be disappointed.

This article originally appeared, in a slightly altered form, on palmbeachillustrated.com