I am not a wine professional---I’m just a guy with a hobby that’s a bit out of control. I spent almost my entire career at IBM. While working my way up I became friendly with a peer manager named Charles Massoud. Charles was an excellent technical manager, a valuable commodity in our business. One day in 1992 Charles walked into work and resigned. Everyone was stunned. After realizing that he was not, in fact, going to a competitor we were even more stunned. He was leaving a very promising and secure career at IBM to make wine, and make it on the North Fork of Long Island of all places! Even I, who was really starting to appreciate wine at the time, didn’t get it.

It turned out Charles had been leading a double life for years. In the late ‘70s he began making small amounts of wine at home. It was fun and he thought it would be a good retirement gig eventually. However, in 1980 he read in the New York Times about people starting to plant wine grapes on the North Fork. He and his wife Ursula visited Alec and Louisa Hargrave, who had planted the first vineyard on Long Island in 1973 and bottled their first wine in 1975. The visit inspired and excited them. They thought about making wine for the next three years, but also visited France, California and Germany with a serious focus. In 1983 he bought a potato farm not far from the Hargraves and figured that at worst he had acquired a vacation / retirement home. He began clearing fields and planting Chardonnay, Cabernet Sauvignon and Merlot on weekends.

It turned out that the North Fork was a good place to grow wine. It’s a spit of land at the Eastern end of Long Island surrounded by water: Peconic Bay on one side, the Long Island Sound on the other. This moderates the temperature variations. (Incidentally, the South Fork is between Peconic Bay and the ocean and is where the Hamptons and Montauk are located. It’s less than a half hour away.) The soil is reminiscent of Graves in Bordeaux. There are pebbles left from ancient glaciers about two feet under the soil, and sand under that. It drains well. The summers are semi-tropical and the winters are cold. To grow grapes you need 180 frost free days. On average Charles gets 220. A degree day is a measure of heating or cooling. Between April 30 and September 30 the North Fork gets roughly 3,000 degree days, in the same range as Bordeaux, making it a cool growing region, more like France than California. This tends to give you wines with high acidity, not high alcohol, which are very food friendly. The temptation is definitely to grow Bordeaux varieties; however, the North Fork grows about 30 varieties of grapes, but only a little of many of them.

Thinking that “Massoud Vineyards” didn’t have the right ring to it Charles named his place Paumanok, the Indian name for Long Island that was used by Walt Whitman in his poetry about the area. Realizing that he lacked knowledge of wine making he asked his wife’s uncle, who was a vintner in Germany, to come and help. He showed Charles how to space the vines 4 feet apart (twice as dense as Charles was planting) and how to start plants low and train them upright. All vineyards on the North Fork now plant this way. He also brought in a consultant from Bordeaux. Gradually he learned to become attuned to the local environment. He has irrigation but uses it only during droughts. He really tries to make the wine in the field and use what nature gives him, but he has learned some manipulations that are good for his environment. He removes leaves that hide the grapes helping to ventilate them and exposing them to more sunlight. This is a good idea on Long Island. It may not be as wise in sunnier areas like California or Australia. He has also learned to cut higher second growths off his vines and to only allow two clusters per plant to give more intensity and ripeness to the clusters that are left. This technique is now known as green harvest. Charles was doing it before it had a name. He is always trying to tune into the environment and always learning.

In the winery the focus is just to not mess anything up. He doesn’t like the term “winemaker”. He considers himself the custodian of a process and a junior partner with nature. His contribution is the manipulations described above, but ultimately the wine happens naturally. He was not going to make it on quantity so the emphasis has always been on quality, and the quality has been such that the business is a great success. Charles’ three sons are now taking over and it will support all of them. Going from a pioneer on the North Fork to the award winning operation they have today is an amazing feat. My friend took a big chance and won. 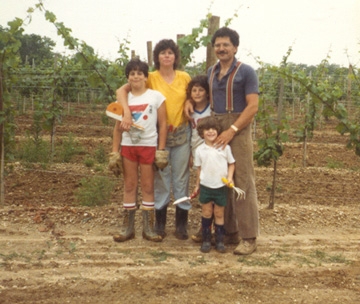 2008 Festival Chardonnay is an unoaked, simple but very good Chardonnay with melon and apple flavors and a dry finish. It is clean and direct. It’s a very good wine for dishes like flounder or Salad Nicoise. It comes in a screw cap as do all of Pamanok’s whites and retails for $14.99.

2007 Barrel Fermented Chardonnay ($18.99) has a deeper color and is much more complex and Burgundian in style. During fermentation, yeast cells settle at the bottom of the barrel. The wine is occasionally stirred to get them off the bottom and to introduce some air. This is a technique called batonnage. It cuts down the oaky taste and makes the wine a little less buttery. The result is a medium-bodied wine that’s not too fat, not too alcoholic, with very evident fruit. The tastes again are melon and apple with, perhaps, a little butterscotch.

2008 Chenin Blanc ($28) is the only Chenin made on the East Coast of the US and is a unique wine. Words like fresh, crisp, bracing came to mind as well as grapefruit and pineapple.   The Massouds serve this on weekends with oysters and I suspect that’s a great combination. The wine has remarkable acidity which makes it very compatible with food, and restaurants like the Grammercy Tavern in NYC feature it.

2007 Dry Riesling is from one of the first blocks planted at Paumanok, a single vineyard wine. It has a very green character with tastes of lime, green apple and a hint of ginger. It is unusual, exotic and not typical of Rieslings, but not completely different either. I really liked this one and would love it with Asian food. It’s worth every dime of the $22 price.

2007 Festival Red ($18) is a Bordeaux blend with red and black fruit flavors, literally a festival of flavors. It would be very good with almost any kind of meat. It was young and had only 2 months of bottle age. I suspect it will get really interesting in time, but it was pretty darn good now. DBGB, a popular new Daniel Boulud restaurant in Manhattan, serves it by the glass. Festival Red, and all of Paumanok’s reds, come in either a cork or a screwtop. Going to screwtop was not an economic decision, since it costs more. It was done because they feel it’s good for the wine.

2006 Cabernet Franc is a steal at $22. It tastes of red berries and a little of the signature bell pepper of this varietal, but also of figs and spices. There’s a lot going on in this wine which I really liked. It reminded me of a Cab Franc from the Loire Valley. Charles agreed but said in some years it’s more like one from St Emilion. (Temperature variations in the North Fork make it very hard to reproduce wines year to year, so vintage matters here.) It’s a very good wine from a varietal that seems to do very well in this area.

The winery makes a Grand Vintage line which are more expensive special occasion wines. They are uniformly impressive and, when compared to other special occasion wines, are a great value for the money. 2004 Merlot Grand Vintage ($36) reflects the Bordeaux-like terroir. It’s a complex and lovely wine that is only made in good years. 2005 Assemblage ($40) is a blend of Cabernet, Merlot and Petit Verdot. This is a big scorer in competitions that is good now but will improve over the next 10 years.

The standout of the Grand Vintage line is the 2005 Petit Verdot ($60). This varietal, which is not usually sold by itself, was planted as a blending wine. It turned out so well that they bottled it. It is an inky black wine with concentrated black fruit flavors and some spice. It stands out because it’s more like a Northern Italian or a Rhone wine than a Bordeaux. It’s a wonderful wine that speaks volumes about what is possible in the North Fork.

Have you been to Long Island's North Fork?

Have you visited Paumonok Vineyards, or have you tried any of their wines? Share your comments and insights with the community!