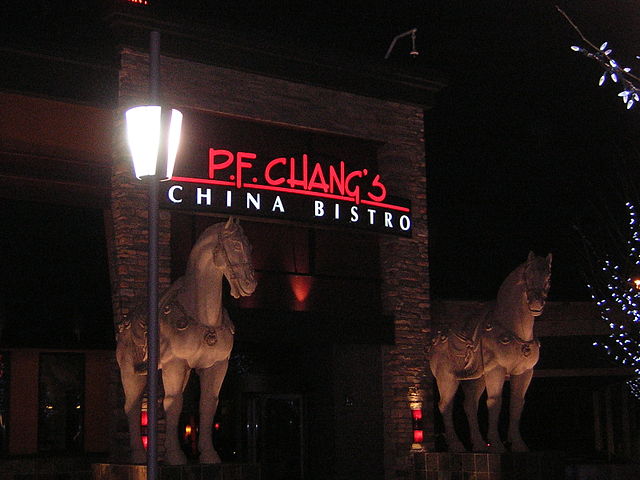 Wine was a part of the P.F. Chang’s concept from the beginning.  It started when Paul Fleming (the P.F. part of the name) moved to Scottsdale, Arizona and couldn’t find any Asian food that he liked.  He had been a Ruth’s Chris Steak House franchisee and knew the restaurant business.  He teamed up with a chef, Philip Chang, and opened the first restaurant in 1993.  The vision was to build a unique establishment featuring Chinese cuisine but also offer attentive service, a full bar and good wine list, cappuccino and tempting desserts, all served in a stylish upscale bistro setting.

At the time there was no intention of building more restaurants, but the first one went well and they ended up opening another in Newport Beach, California in 1994.  A few more were opened in affluent areas of Southern California in 1995 and the company took off.  Today there are over 150 Bistros from coast to coast.  It's not clear how many more will open because they are running out of places that meet the income and traffic requirements to profitably open a P.F. Chang’s.  Indeed, the company is now opening Pei Wei Asian Diners, a smaller, more casual concept featuring some similar products but also offering other Asian dishes.  International expansion is also a possibility but no plans have been announced.

One fast way to realize that P.F. Chang’s is different than the average Chinese restaurant is that 20% of the revenue comes from beverages, and wine represents almost one half of that number.  To get a feel for the wine program I spoke to Laura Cherry, Director of Public Relations, and Mary Melton, Beverage Manager for the chain.  Both take wine very seriously and I was frankly surprised at the extent of the program and the effort that is put into it.  They have hired some wine industry gurus to help them flesh out the wine list and to contribute to their in-house wine training.  People such as Doug Frost and Evan Goldstein, both Master Sommeliers, are on board at the moment.  Doug wrote the latest edition of a company newsletter that Mary regularly distributes.  Evan is hosting a series of wine dinners around the country.

Each restaurant offers a list of approximately 50 wines, almost all of which are available by the glass.  Twenty come from an anchor wine list and are the same for all restaurants.  This list is changed once a year.  Most of the rest come from a wine cellar list that has roughly 300 wines on it.  Managers nominate wines for this list which is then offered to all locations.  Managers may also pick a few wines of their choice which often tend to be from small, local vineyards.  Years ago P.F. Chang’s introduced a progressive wine list.  Major categories are Sparkling, Sweet White/Blush, White and Red.  Within those categories, wines are listed from lightest intensity to most full bodied, encouraging people to experiment.  In addition, there are featured wines selected to compliment certain types of cuisine. 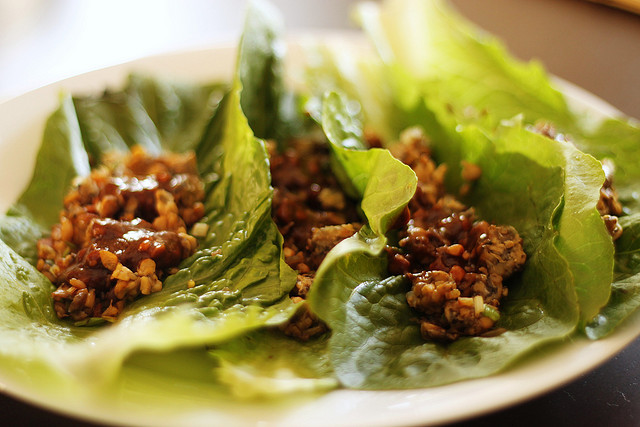 At the time I worked on this article there was a special regional selection of Yunnan dishes on the menu, and a red and a white Australian wine that go well with this type of cuisine were added to the list.  Those wines could also be sampled in two flights that were offered, both for $8.  The white flight offered an Australian Sauvignon Blanc, an Australian Semillon Blend and an American Sauvignon Blanc.  The red flight was an Australian Shiraz, an Australian Shiraz/Grenache Blend and an American Syrah.  The flights are just plain fun but are also a vehicle to introduce new wines to their clientele, and the chain is seeing increased sales of Shiraz and Semillon as a result.  At one of their locations in Oregon, they offered Spanish wine flights with similar results.   Over the holidays many locations offered bubbly flights featuring a Blanc Noir, a Blanc de Blanc, and a Brut.  A small card accompanies the flights which helps educate the customers and make sure they remember which wines they tasted.

There is ongoing wine training for the staff.  Much of this is done online focusing on varietals.  They find that their staff wants to increase their wine knowledge (and sales) and really uses this education.  Additional training is required of location managers and beverage managers.  Also, as mentioned above, a regular beverage newsletter is distributed.  I saw one written by Doug Frost that focused on how to sell wine flights and how to help customers get the most out of the experience.  It was very well done and I believe would help a server gain the confidence needed to speak more intelligently about the wine list.  Servers do not recommend wine/food pairings.  This is difficult with Chinese food since typically many different flavors and textures are on the table at the same time.  But customers are definitely encouraged to try a glass of something different, and they seem to be responding.  Pinot Noir is very popular nationwide and sales of Riesling and Petit Syrah are taking off.

The list itself has many familiar names on it, but most are quality labels like Bonny Doon, Trimbach, Erath, Castello Banfi and Cambria.  It is a nicely thought out list that offers a good variety, along with enough unfamiliar wines to keep it interesting.  Wines are priced so as not to be a barrier to people trying them.  Aside from Champagnes, the most expensive bottle is $42 while the least expensive is $24, with most clustering around $30.  Wines by the glass are encouraged and range from $6 to $10.50, with most in the $ 6.50 to $7.50 range.  By the way, a glass is a 7 oz. pour.

But what about the food that comes with the wine?  They talk the talk, but can they wok the walk?  Chinese cooking is something I have studied for years and have even taught classes in.  I wasn’t sure what to expect, but again P.F. Chang’s surprised me.

A visit to a local branch revealed a large bar area attached to a sleek room accented with hand-painted murals, Ming dynasty style art pieces, replicas of terra-cotta warriors and low lighting.  Although the tables were too close together, it was reasonably comfortable.  The noise level, the seemingly obligatory open kitchen, and the plates imprinted with the restaurant’s name let you know that you were in a chain restaurant, but an upscale one.

We started with two popular appetizers.  Chang’s Chicken in Soothing Lettuce Wraps ($7.50) is probably the restaurant’s signature dish.  It’s a mixture of minced chicken stir fried with water chestnuts, green onions, garlic and a sweet spicy sauce served with lettuce leaves which function as bowls.  This is not a common Chinese dish---in fact, it’s more Vietnamese in concept, although I've heard of a somewhat similar minced chicken recipe from Canton.  However, I don’t care how authentic it is.  It’s delicious, addictive and a great way to start a meal.  Northern Style Spare Ribs ($8.00) are not the typical ribs dripping with barbeque sauce and masking the real meat flavor.  These are dry ribs braised in a wok and served with 5-spice salt.  A portion was 6 good sized tender juicy ribs with an excellent flavor.  We were off to an impressive start.

We then had one of those great food/wine combinations that wine people live for.  We ordered the Pin Rice Noodle Soup ($7.00).  This is described as pork dumplings, shrimp, green onions and bean sprouts in a spicy chicken broth, and a tasty little number it was.  However, we had ordered a Chateau Ste. Michelle Riesling ($7.00 per glass), and the pairing with the spicy soup was fabulous.  I rarely order readers around, but if you go this combination is mandatory. 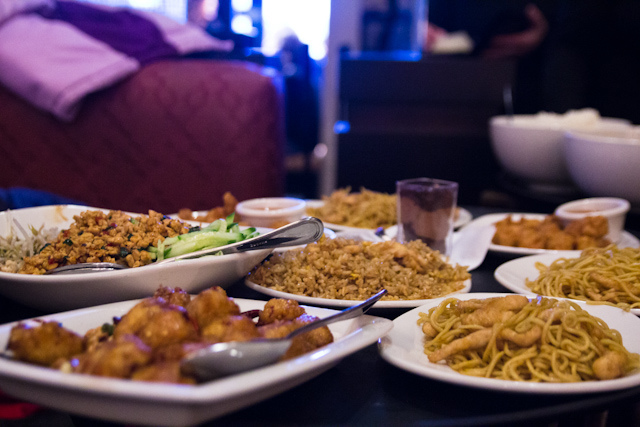 Moving on to the main courses, we ordered Wok Charred Beef off the featured Flavors of Yunnan Menu ($13.50).  It was beef with marinated mushrooms and roasted sweet peppers---not much like any dish I’ve seen before, but tender, interesting, and a very good effort to offer something different from what you’d see in a standard Chinese restaurant.  Oolong Marinated Sea Bass ($20.00) is broiled instead of the standard steamed fish.  It was fairly simple, as fish should be, but quite flavorful.  Kung Pao Shrimp ($13.50) was above average and not the heavy, greasy treatment you often see.  Chang’s Spicy Chicken ($12.00) was not very spicy, a little dry, and the least impressive of the dishes.  Being four people on diets, we did not have dessert, but we saw the Banana Spring Rolls ($6.50) and the Great Wall of Chocolate ($8.00) and they looked very tempting.

Was this the best Chinese food I’ve ever had?  No way!  That was in places like Shanghai, Hong Kong and big city Chinatowns.  But honestly, I’m not sure how popular truly authentic Chinese food would be if it were widely offered.  Exactly how many of us are into things like innards, chicken feet or sea cucumbers?  P.F. Chang’s does a balancing act between authenticity and mainstream tastes and they do it impressively.  They send cooks to China to ensure that their recipes are grounded in authentic techniques and to find new ideas for their regional menus.

What they come out with is dishes that have been tuned to American tastes, far less pungent than really authentic Chinese cooking, but quite nice to eat.  I’d suggest asking your server which dishes are most spicy and flavorful.  (None of the spicy dishes are really hot, so don’t be concerned about that.)  I think some of the plain dishes can be really plain.  I think they could do a much better job with their rice.  But I also think they are honestly trying to introduce customers to new tastes with both their food and their wine, and it shows in the final product.  A good friend of mine who grew up in Taiwan and really knows Chinese food turns out to be a fan of the chain, and that reinforces for me that they’re on to something.

P.F. Chang’s sees itself as an upscale, full service restaurant that happens to serve Chinese food.  It’s a fair assessment.  If you’re looking for a nice glass of wine and dessert with some good Chinese food you should give them a try.

What do you think of P.F. Chang's

Have you been to P.F. Chang's? If so, do you agree with this review? Share your comments and insights with the community!