ruffino riserva ducale: the tan and the gold 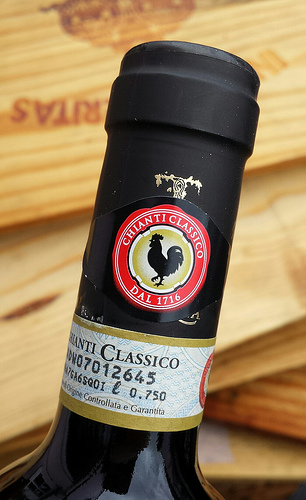 When cousins Ilario and Leopoldo Ruffino established their winery in 1877, the Chianti Classico region between Florence and Siena was in a dismal state. Modern Chianti had been invented several decades before by Baron Ricasoli, as a vehicle to bring prosperity to the poverty-stricken area. Chianti eventually did function as a pillar of economic revival, but it took over a century to accomplish that .

Ricasoli’s Chianti didn’t bear much resemblance to the wine we drink now. It was a blend of 70% Sangiovese, 15% Canaiolo and 15% Malvasia and Trebbiano, both white grapes. It was not quality wine by any stretch of the imagination. By all accounts the Chianti of the 19th century was the worst kind of quaff, made from high-yielding, low-quality clones and produced in filthy and primitive cellars. The 20th century version was not much better. By the end of World War II, Chianti’s reputation had plummeted to the point where it was the wine of last resort for many consumers.

There were exceptions, of course. The Chianti made by Ilario and Leopoldo Ruffino started winning gold medals in the 1880’s, and soon was regarded as one of the region’s best. In 1890 the Duke of Aosta made a pilgrimage to Ruffino to taste the wines, and rewarded the cousins with an appointment as the official supplier to the Italian royal family. Ruffino returned the favor in 1927 by launching its first vintage of Riserva Ducale in the Duke’s honor.

On a broader scale, the redemption of Chianti Classico didn’t occur until much later. In 1971 Piero Antinori shocked the Italian wine world by blending some Cabernet Sauvignon into his flagship Chianti called Tignanello. The establishment responded by forcing him to label Tignanello as vino da tavola, or table wine---the lowest rung on the quality scale. For his part, Antinori didn’t care: the revolution was on. Before long, Italy joined the EU, and its wine became a different kind of commodity. It was now being made for export, and had to be made better. Before long there was a flood of capital and winemaking talent into Italy, and the world was awash with expensive Super Tuscans. Those wines were still Sangiovese-based, but they were blended with Cabernet and Merlot. And for that reason, they sold well in America and other international markets. Prosperity had finally come to Chianti Classico.

In the meantime, Ruffino had refined its act further. They had purchased six separate, distinctive wine estates, and began selling their wine in glass bottles rather than the traditional straw-covered fiasco. In 1947, they released the Riserva Ducale Oro, or gold label. All in all, they were well positioned to capitalize on the revolution when it finally happened. For them, it wasn’t news that Chianti could compete with the great wines of the world; their wines always had. Riserva Ducale was celebrated in pop culture, and even became known as the favorite wine of Tony Soprano---not for nuthin’, as they say in Jersey. 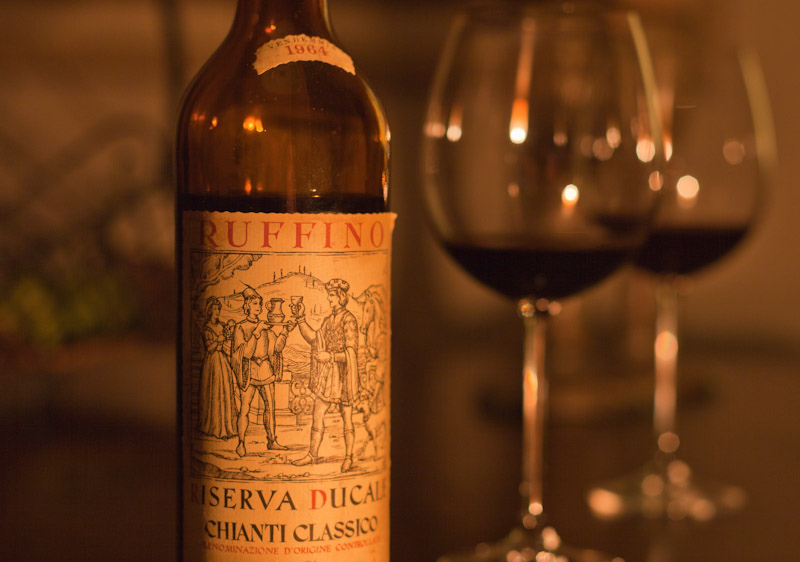 Ruffino Riserva Ducale 2013 ($22), or tan label, has a fragrant nose exuding traditional Chianti aromas of red berries, anise, leather and smoke. In the mouth, the wine displays vibrant flavors of cherries and cranberries, opening in the mid palate with hints of rhubarb and violets. Crisp acidity lends a vivid palate imprint that contrasts nicely with the smooth texture. Earth notes, mint and cherry fruit reverberate on the finish. Food pairing span a range from simple grilled and roasted meats to pasta Bolognese, poultry and wild game.

Like its sibling, the gold label ($34, otherwise known as Riserva Ducale Oro Gran Selezione 2012 or Tony’s favorite) is a blend of 80% Sangiovese and 20% Cabernet and Merlot. It is deeper and richer from just about every perspective. The nose yields scents of anise, minerals and ripe black plums. It is denser on the palate than the tan label, with a concentrated core of earthy black fruits accented by hints of chocolate and baking spices. The earthy, mineral-infused mid palate gives way to a finish that is long and memorable. It calls out for suckling pig, wild boar or a veal chop with porcini mushroom sauce.