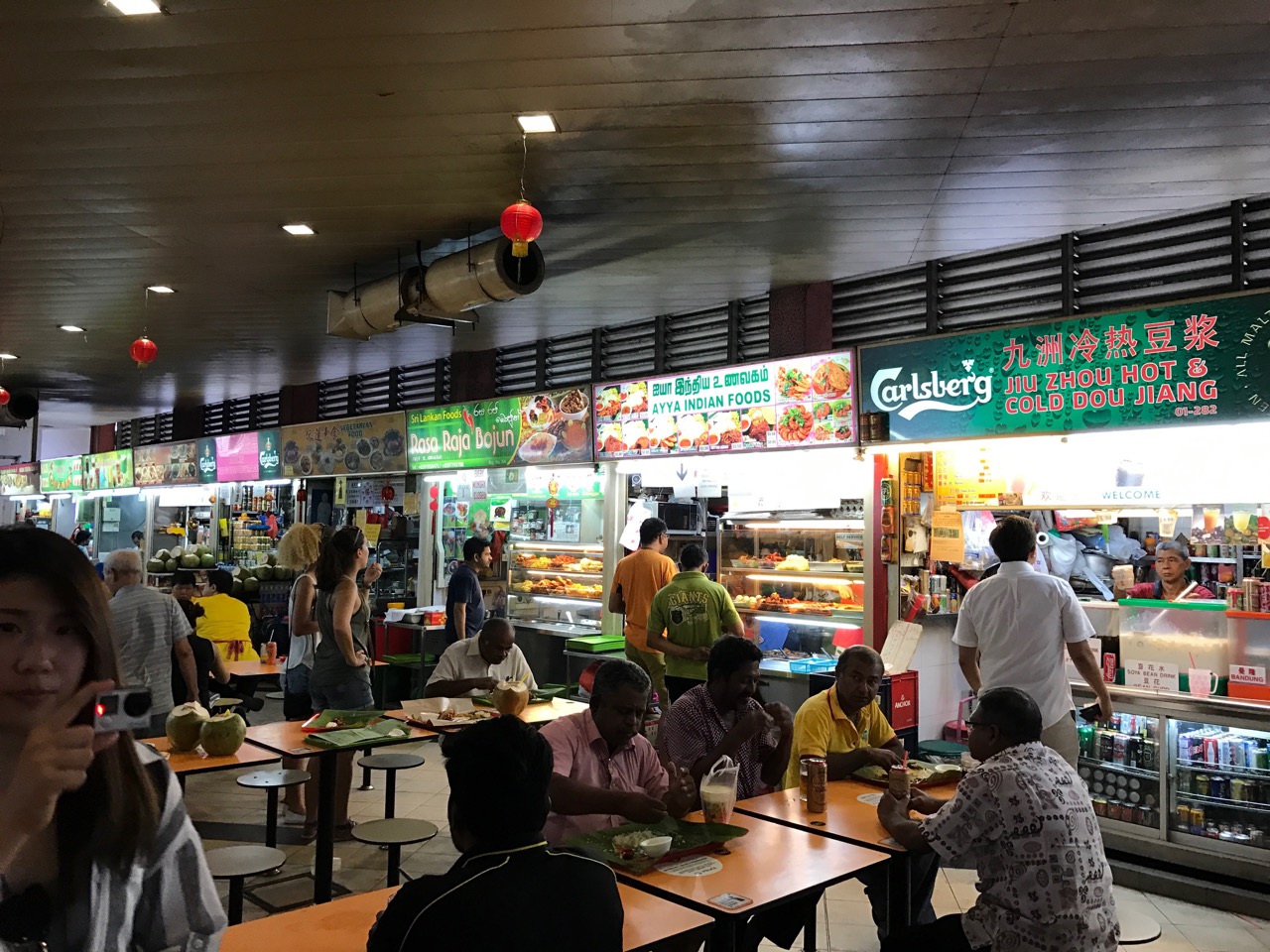 Street food used to be a problem.  Vendors were clogging up important parts of town and they had a reputation of being unsanitary.  In the 1970’s the government swept them all off the street and put them in Hawker Centers.  These are facilities with stalls for the vendors, common seating, a roof, and sanitation.  They spread all over the city and have recently been supplemented by indoor, air conditioned food courts located primarily in shopping malls.

If you are not familiar with Asia, particularly Hong Kong, Malaysia, Singapore, and even Australia, one of the first things you need to understand is that here a food court is a good thing.  This is where you get the real stuff, and get it very inexpensively.  Hawkers are serious cooks.  One famously took down Gordon Ramsey in a cooking contest.  They have inspired famous chefs like Jean-Georges Vongerichten, who opened a street food themed restaurant named Spice Market in Manhattan that spawned locations in Mexico and Qatar.  Anthony Bourdain, who is totally enamored of these places, is in the process of building a Singapore style Hawker Center on a pier in the Hudson River in New York.  The final homage was paid last year when two Singapore Hawkers were each awarded a Michelin star to recognize the importance and quality of this kind of food.  So now you can get a Michelin starred meal for two dollars if you want to wait on a long line. 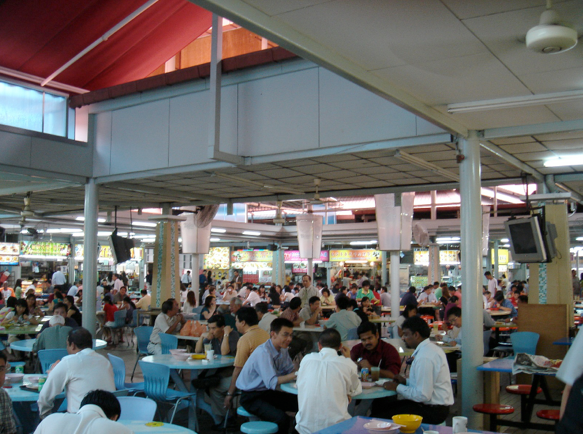 Singapore was recognized as a strategic location by the British East India Trading Company in the 1800’s, and they developed it.  The driving force behind this was Sir Samford Raffles and it seems like half the city is now named after him.  Workers were brought in from China, India, Malaysia, and Middle East to build the necessary facilities.  Each of these groups was given an area to live in and those wonderful ethnic neighborhoods still exist today.

I began my adventure in the Middle Eastern section known as Kampong Glam.  Just in case you’re not sure where you are, the main drag here is named Arab Street.  The area is full of shops selling Middle Eastern clothes, silks, spices, chandeliers, etc.  The sights and smells are wonderful.  The most colorful street is Bussorah Street, named after a place in present day Iraq.  It is a one block pedestrian mall filled with shops and restaurants.  At one end is the large Sultan Mosque and at the other end is the Kampong Glam Cafe which had been recommended to me.  It was very busy at lunchtime with a long line at the counter and this was one of the few places where not a lot of English was spoken, so I just pointed at things that looked good and wound up with a delicious plate of food for about $5.  There was shrimp, eggplant, other vegetables that I didn’t recognize, and rice.  A wonderful array of flavors.  I was off to a good start. 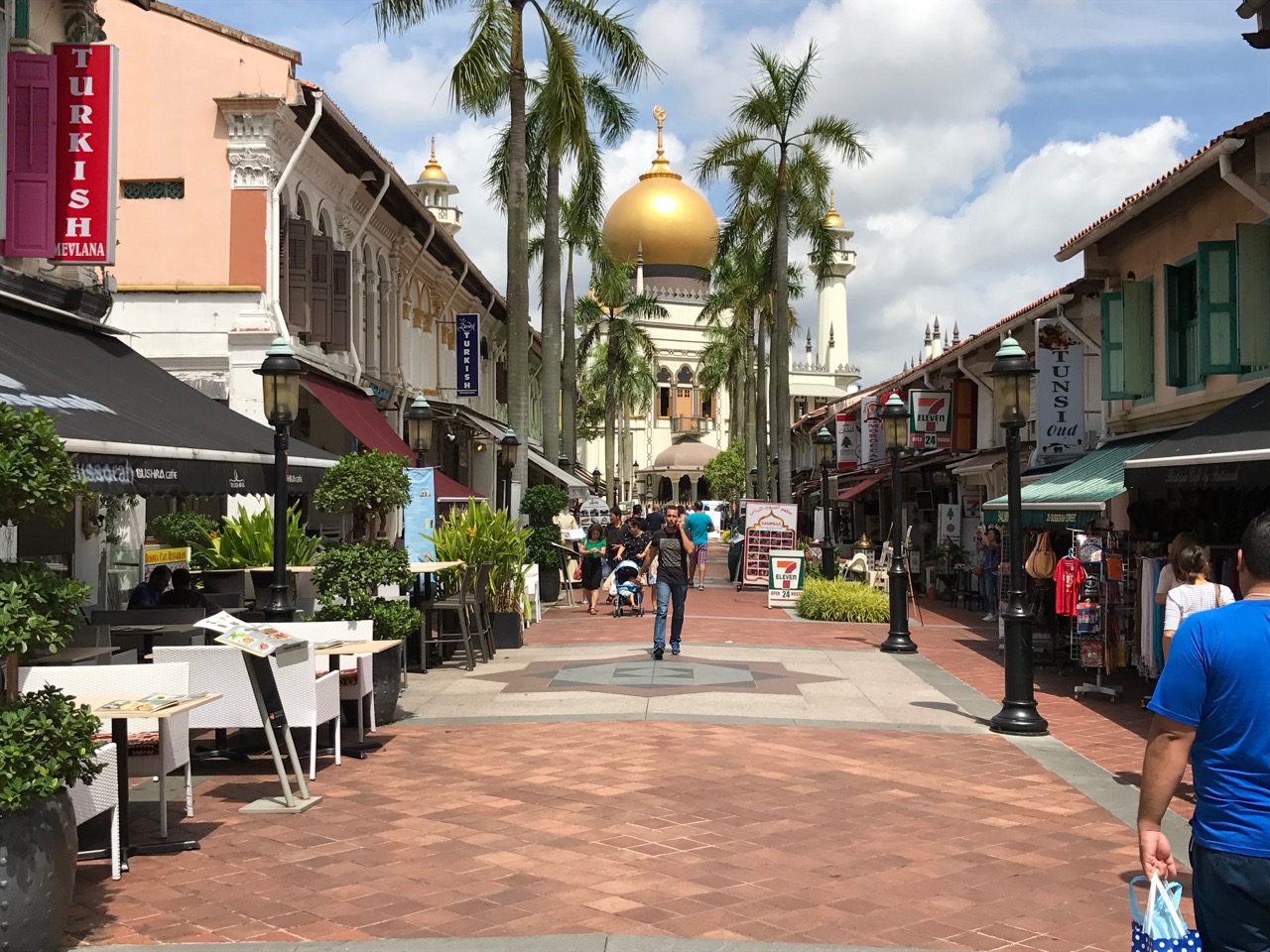 If you walk west on Arab Street you will eventually wind up in Little India.  Similar idea to Kampong Glam, just different fabrics, goods, spices and smells.  You really could think you were in India.  The main food attraction is the Tekka Center, which is a large market with a Hawker Center in it featuring all sorts of Indian food.  Since I had arranged a tour of some Hawker Centers for that night I opted for a vegetarian restaurant that had been recommended by a friend who lived in Singapore for years called Komala Vilas.  This was really a standalone hawker stall where you order at a counter, find a seat, and the food is brought to you.  I had an excellent vegetable biryani served on a banana leaf for $6.

That evening I met up with Gerry Chen, a local street food expert who gives personalized tours of Singapore neighborhoods, and who turned out to be a knowledgeable and delightful companion.  We had arranged to walk and eat our way through the Malay part of town, Geylang, Joo Chait Road, and Katong.  We stopped at the Geylang Serai Market and Food Center as well as the Marine Parade Hawker Center.

We started with dessert, and why not?  Putu Piring is a steamed rice flour cake with a palm sugar filling and grated coconut on top.  It is a traditional Malay dessert requiring special equipment and ingredients to do properly.  It’s very sweet and very tasty.  It’s easy to see why this is a very popular Hawker dish.  Like much of the food we had that night there are versions of this dish all over Southeast Asia. 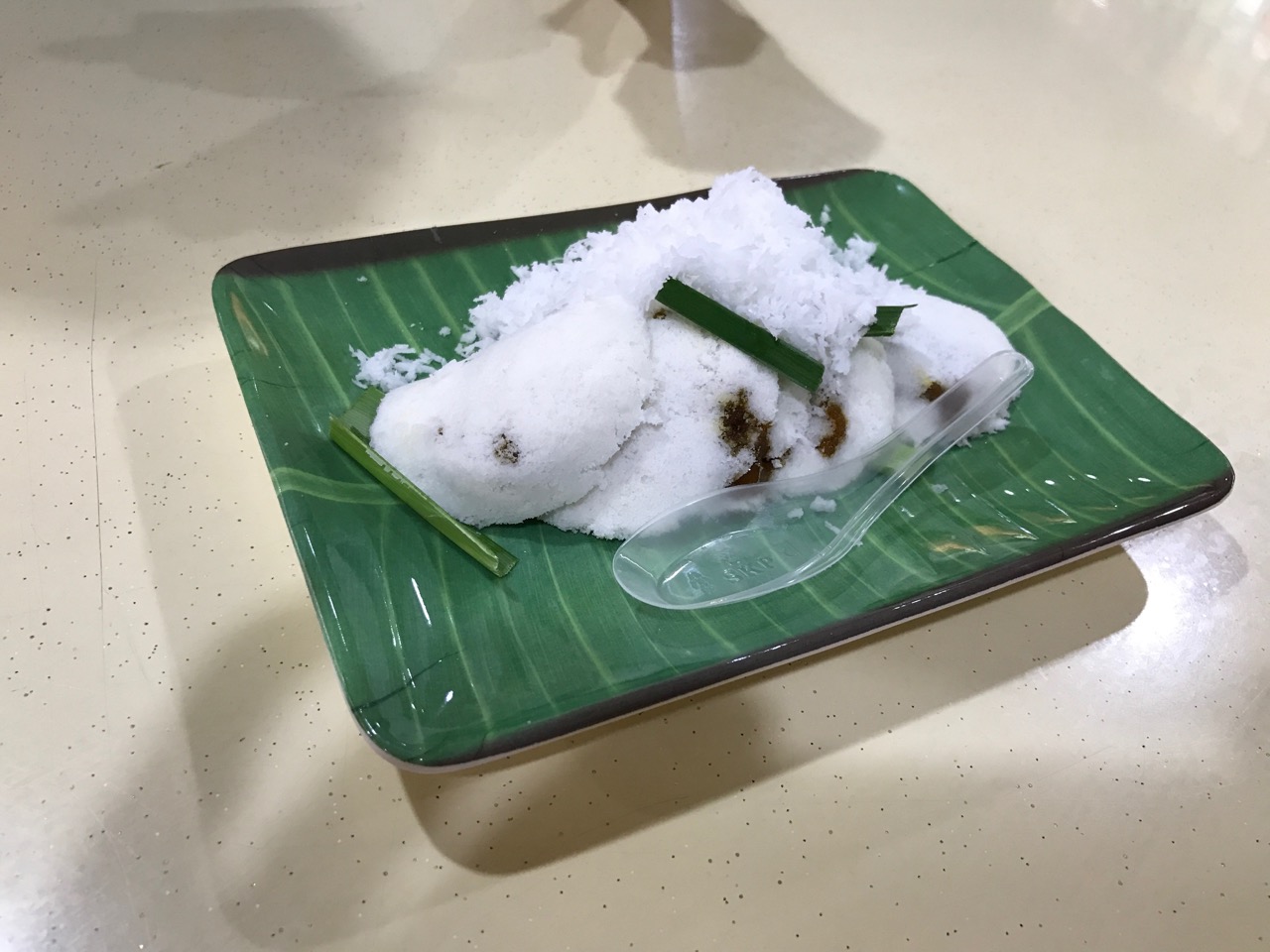 Nasi Ambeng is a celebratory Indonesian dish usually shared among families.  The version we had consisted of rice, potato cutlet, chili eggplant, spicy coconut stewed beef, grated coconut, cow lung, samba chili, and chicken and vegetable curry.  It was a virtual explosion of flavors in your mouth and one of the best plates I had in Singapore. 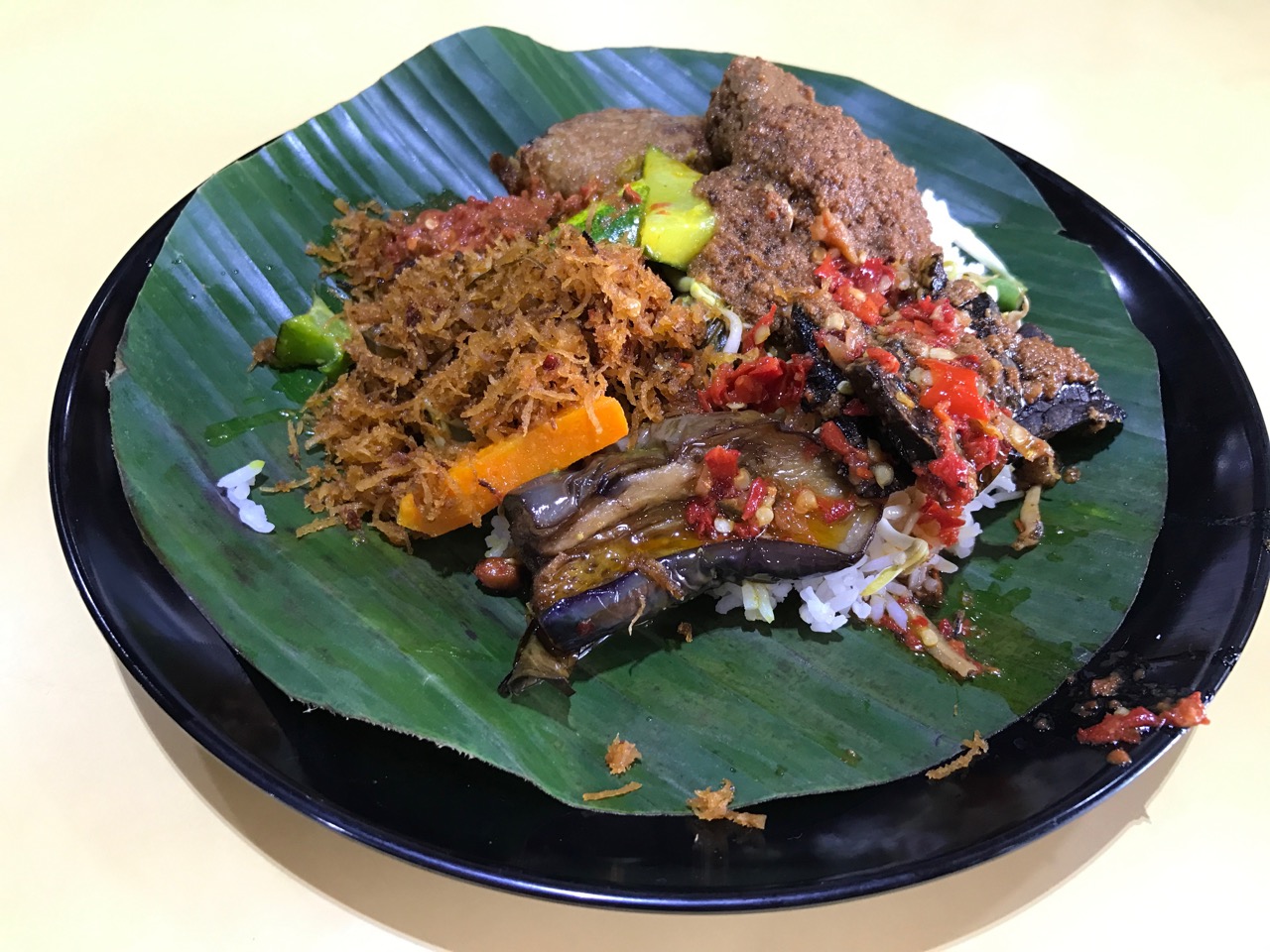 Teh Halia is the local version of Ginger tea with milk.  This has a long history of being used throughout Asia as an herbal medicine.  It aids digestion, coughs, sore throat and blood circulation among many other ailments.  More important, it’s a soothing and very delicious drink, really nice after the dish that preceeded it. 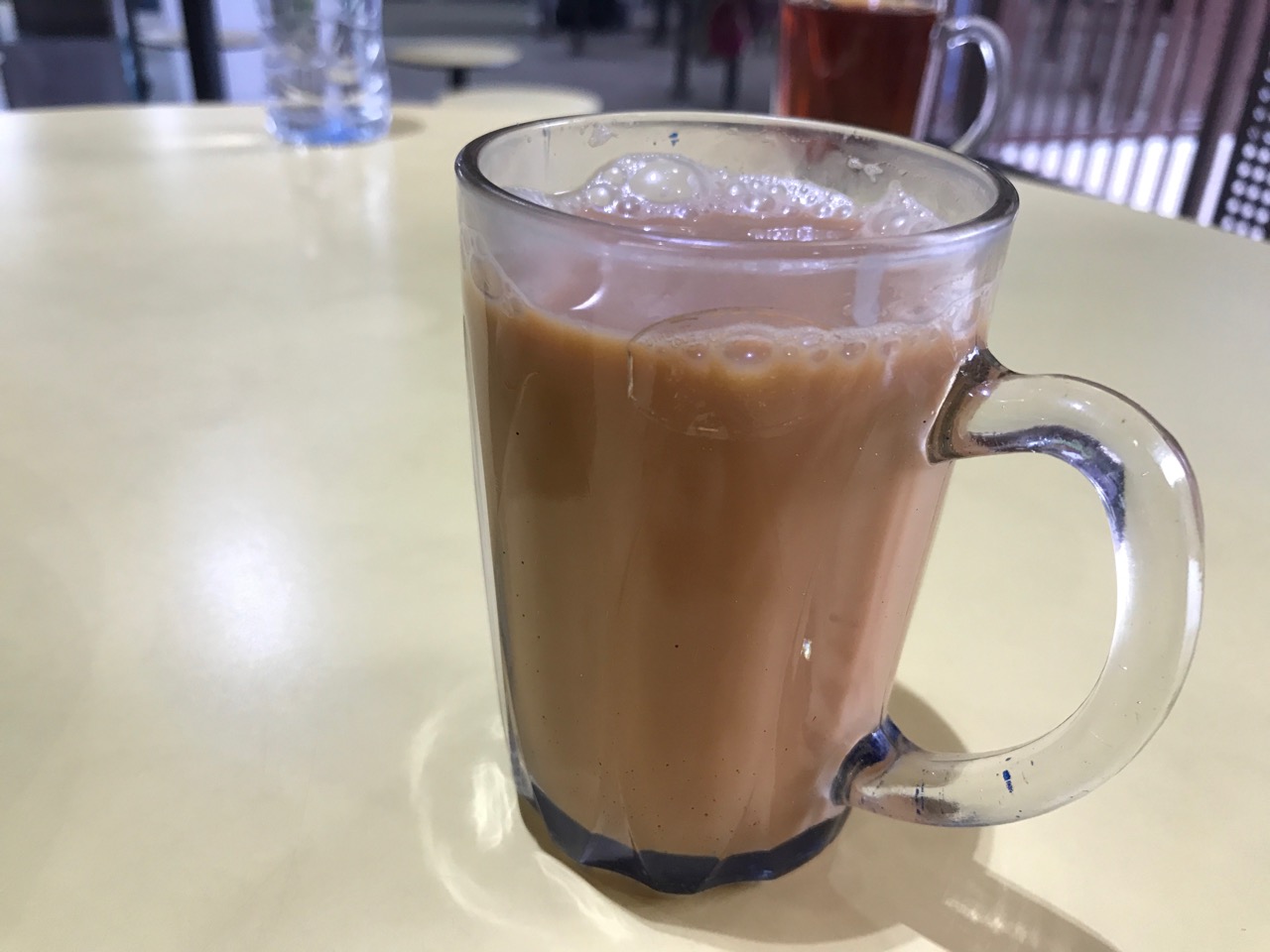 Fried Hokkien Mee is originally a Chinese dish that has spread throughout this part of Asia.  It contains both egg and rice noodles that have been soaked in a stock that contains shrimp and other seafood.  These are then stir fried with egg, pork, prawns, garlic, bean sprouts and soy sauce, and topped with chili and lime.  It was fragrant and delicious. 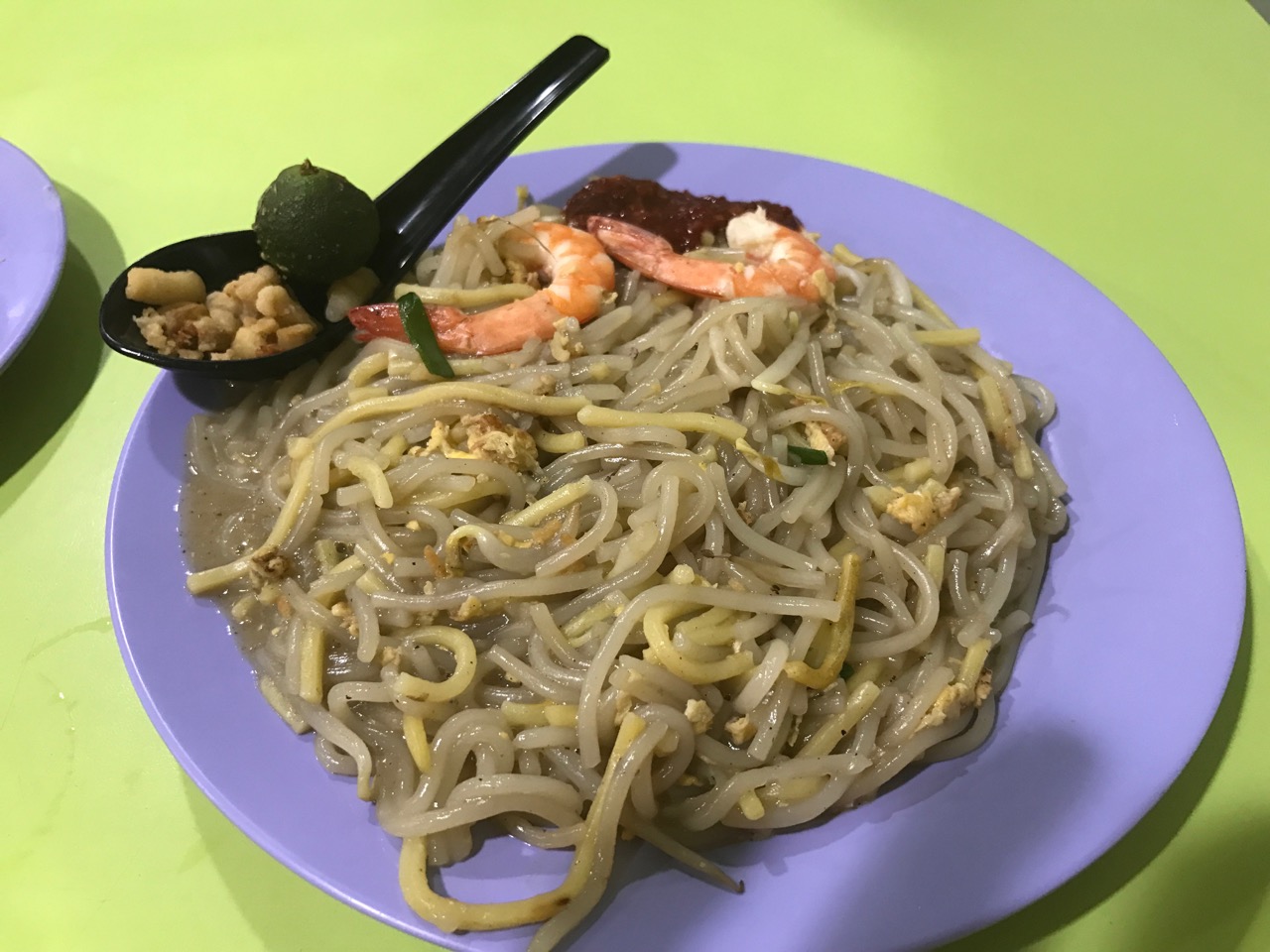 Fried Carrot Cake is a dish you can find all over the city.  It is neither a cake nor does it have carrots in it.  It’s made with daikon radish.  Apparently, the Chinese words for daikon and carrot are almost identical.  This version was steamed rice cakes and daikon stir fried with garlic, eggs, preserved radish, chili paste, a sauce with some sweetness in it and topped with chopped spring onions.  There is also a white version of this dish that omits the sweet sauce and is more subtle.  The technical term for this is yummy. 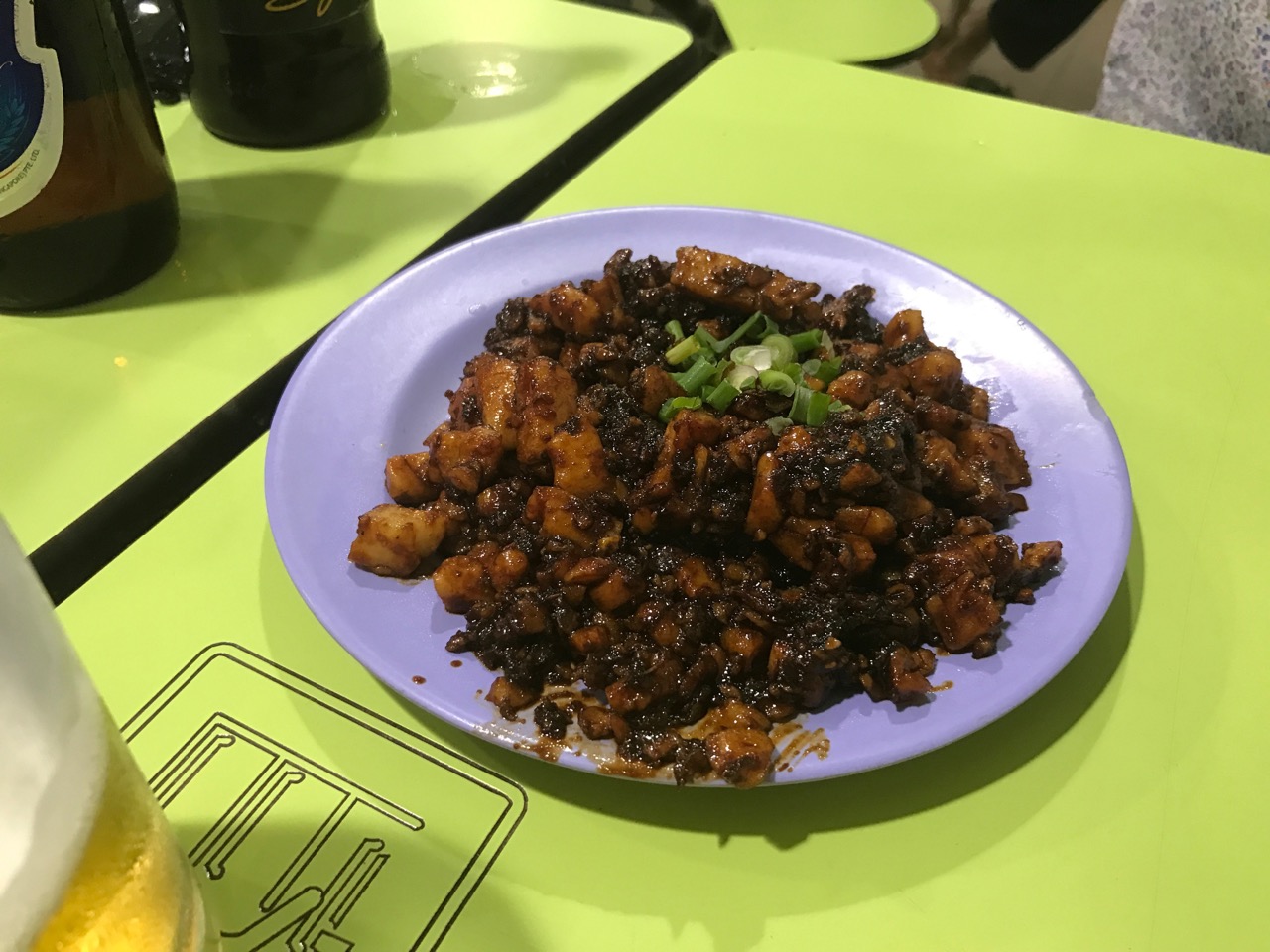 In addition to the dishes we sampled we walked through a traditional part of town with interesting architecture and shops, winding up in Katong which is a more modern, hip area where we had the Laksa described in a previous article.  The dishes we had were fairly complicated to make and involved many ingredients; although some people may cook their favorites, given fairly small home kitchens and inexpensive prices in the Hawker Centers, I’m sure they are dishes that most of the population eats out.

Singapore is definitely foodie central.  We did pretty well that day but we just scratched the surface.  In addition to the food Singapore boasts some incredibly beautiful botanic gardens, including a UNESCO World Heritage Nation Orchid Garden, amazing shopping and many other things to see and do.  It’s a great place to go if you can.

Note:  Gerry’s tour is called the Singapore Hawker Center Food Tour and Neighborhood Walk.  It can be found on viator.com.  More information is at singaporefoodsters.com.  It can include many different parts of Singapore and is customized to each client.  Highly recommended.

Coming up next: Ken's guide to the street food of Hanoi. 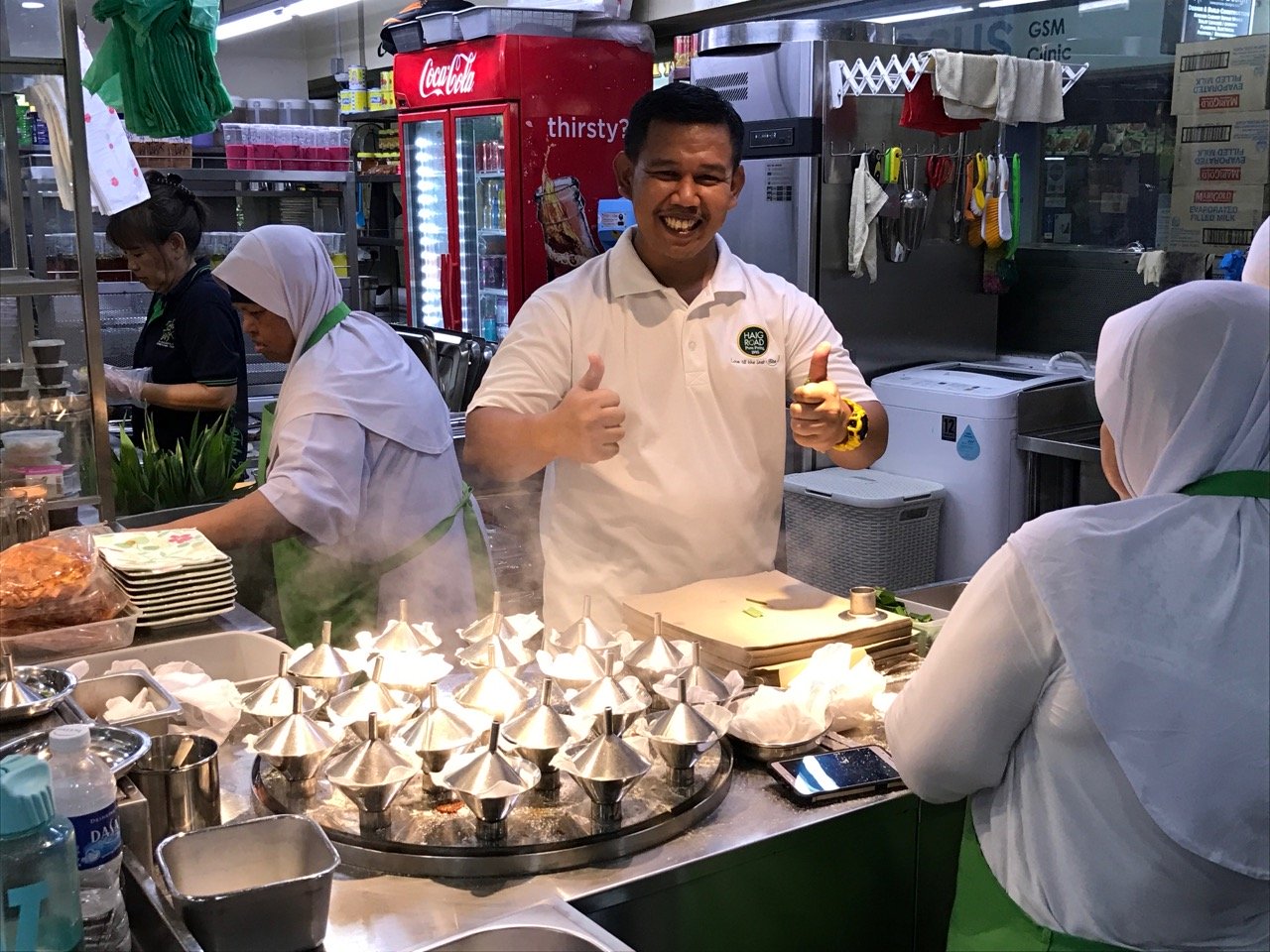