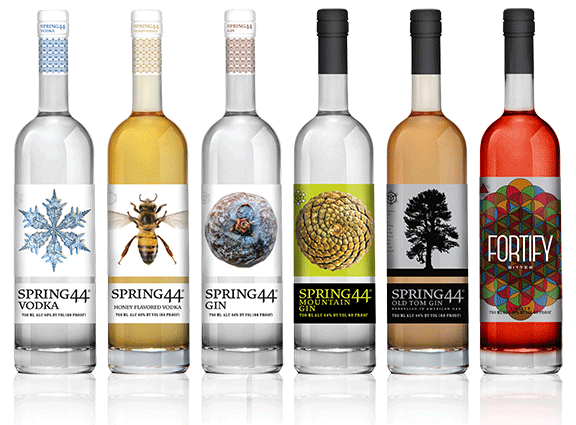 When Jeff Lindauer was a boy, long before he founded Spring 44, his father purchased land in the northern Colorado Rockies that was completely surrounded by Roosevelt National Forest. One of the rituals on family camping trips was drinking from the spring at 9,044 feet; the pure, pristine water provided a direct connection to nature. As a successful adult, Lindauer built a home on his father’s property and continued to use the land for vacations and retreats.

About five years ago, Lindauer and his childhood friend, Russ Wall, visited the spring at midnight for a drink under the stars. It was a moment of epiphany for Wall, who was astounded by the quality of the water and suggested to Lindauer that they should bottle it. The project proved impractical, but eventually gave way to the idea of using that water as a base for distilled spirits.

“About 60% of a bottle of 80 proof spirits consists of water,” says Lindauer. “We have the purest water on planet earth---it flows straight from the Rockies, and never comes into contact with a municipal water source---so why not use it to produce a high-quality craft spirit?”

Spring 44 entered the market in June 2011. The initial product line consisted of Vodka, Honey-Flavored Vodka and Gin; since the launch, the company has added Old Tom Gin, Mountain Gin and a bitter liqueur called Fortify. Lindauer believes that craft distilled spirits will follow a similar path to other categories such as beer, coffee and soda, with artisanal products made in increasingly larger quantities for general distribution---technique and quality are the key factors for him, rather than size. He is also an unabashed cheerleader for American-made, superpremium spirits as an alternative to imports.

Lindauer’s thinking puts him on the cutting edge of where the American craft distilling movement is heading. A decade ago, craft spirits tended to be made by micro-distillers working out of their garage. As these brands have grown, the challenge has been to maintain the uniqueness of the product. Many American consumers have been brainwashed into believing that smaller is better, and only boutique wineries or distilleries can really turn out something that is distinctive and special. The facts are quite different. Tito’s Handmade Vodka, for example, now produces more than 500,000 cases annually. The best example may be Patrón Tequila. When Patrón built their current facility in Mexico, they faced the challenge of how to continue making high-quality tequila while making two million cases each year. Distiller Francisco Alvarez solved the problem by designing 12 smaller facilities under one roof, allowing him to make small-batch spirits on a large scale.

The Vodka ($25) has a fragrant nose with aromas of sweet corn and exotic spices (cardomon, coriander and a hint of nutmeg). It is clean and fresh the mouth, displaying a strong herbal identity paired with a volutuous texture (the result of the addition of agave); the sweetness returns on the finish, which is long and resonant. This is a vodka of considerable character and depth of flavor, which would make a striking Martini. The Honey-Flavored Vodka ($25) seems less successful, simply because the honey flavors cover up the spirit’s distinctive herbal character. However, the overtones of hazelnut and vanilla open up a range of interesting cocktail possibilities.

Spring 44 Gin ($30) is the only gin I’ve encountered which could be described as elegant. Aromas of anise and juniper dominate the nose, along with hints of orange rind. In the mouth, gentle flavors of lemon and orange coat the palate, leading to a long and resonant finish. Balance and harmony are the watchwords, with a restrained use of botanicals.